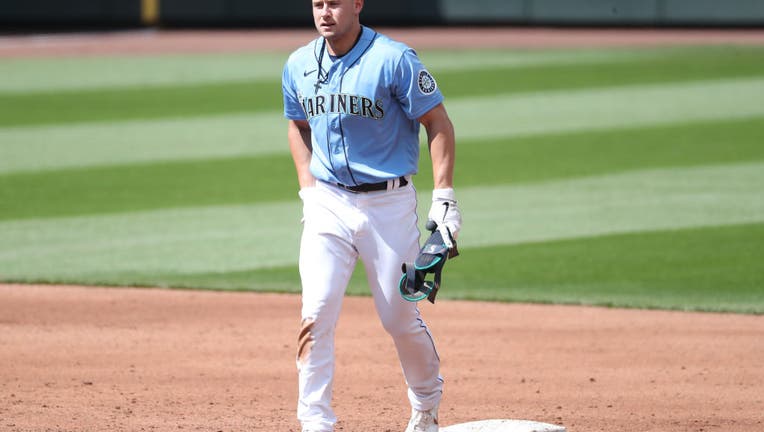 SEATTLE, WASHINGTON - JULY 12: Jarred Kelenic #58 of the Seattle Mariners looks on after hitting a double in the second inning during an intrasquad game during summer workouts at T-Mobile Park on July 12, 2020 in Seattle, Washington. (Photo by Abbie

Two major parts of it, anyway.

Gilbert will be on the mound at T-Mobile Park on Thursday to make his major league debut.

"It’ll be an exciting day for those young players tomorrow," Servais said. "Looking forward to having them on our roster and see what they can do. They’ve both got bright futures."

The Mariners didn’t immediately announce all of their transactions, but Servais said they are optioning outfielder Taylor Trammell back to the minors, and the club is likely to add a third player as well.

After AL Rookie of the Year Kyle Lewis, Evan White and Justin Dunn led a wave of young talent reaching Seattle last season, Mariners general manager Jerry Dipoto decided the time is right to unveil two more of their top prospects in front of their home fans this weekend. The Mariners have dropped below .500 with four consecutive losses, but they’re still in third place in the AL West.

"I think both Jerry and myself have referenced it in the past — it was going to be waves of players coming," Servais said. "This is maybe the first part of the second wave that’s crashing on the shore. They’re exciting young players. We need them to contribute. We’ve got off to a decent start. Haven’t played well the last week. Hopefully they can jump-start us and get us back on the right track."

The 21-year-old Kelenic is considered one of the top prospects in baseball. The Mets drafted the Milwaukee-area native with the sixth overall pick in 2018 before trading him to Seattle several months later in the deal for Robinson Canó and Edwin Díaz.

Kelenic has spent only the past week with Triple-A Tacoma after being sidelined early in spring training with a left knee injury, but the Mariners think he’s ready.

Kelenic was angry with the Mariners earlier this year after former team president Kevin Mather infamously said Kelenic and Gilbert wouldn’t make the opening day roster because it would have affected the team’s long-term contractual control over them. Kelenic and his agent claimed his service time was being manipulated, although Dipoto denied it.

The Mariners believe Gilbert is ready, but they also need another starter. James Paxton is out for the season after Tommy John surgery, while Marco Gonzales (left forearm) and Nick Margevicius (left shoulder) are injured.

Trammell made his major league debut on opening day, but is batting .157 in 27 games.

"I thought Taylor Trammell really showed us a lot of positive things in his time here," Servais said. "There’s a lot to like. He just needs to go play every day. He’ll be back here at some point."