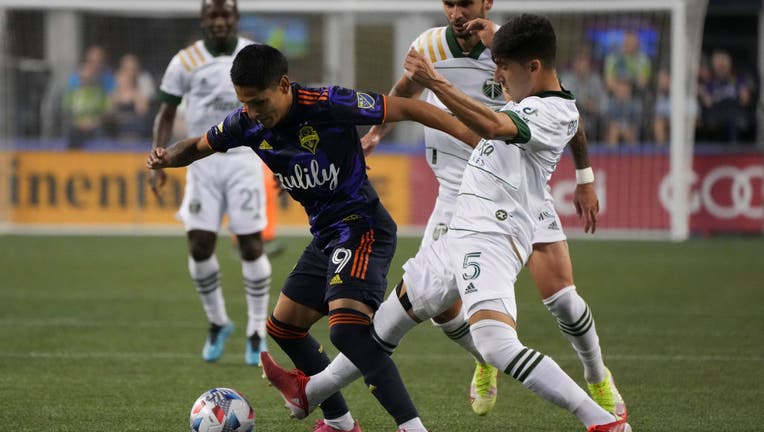 SEATTLE - Nearly a year since suffering a serious knee injury on the same field, Sebastián Blanco was back scoring in Seattle and helping the Portland Timbers earn a little redemption.

Blanco scored his second goal of the season off a sloppy turnover early in the second half, Felipe Mora scored late in second-half stoppage time and the Timbers beat the Seattle Sounders 2-0 on Sunday night.

The Timbers avenged one of the worst loses in franchise history two weeks ago in Portland when the Sounders scored six times in a 6-2 dismantling.

"It was an important win to kind of stabilize us after a tough couple of weeks," Portland goalkeeper Steve Clark said.

The Timbers were pressured the entire second half and had limited scoring chances on their end. But a combination of resolute defending and a bit of good fortune gave the Timbers a needed three points in their attempt to climb back up the Western Conference standings.

The Timbers (8-10-3) are unbeaten in their last six MLS matches against the Sounders in Seattle.

"I’m extremely proud because it’s not easy bouncing back from some of the difficult performances that we had, but the team worked very well this week," Portland coach Giovanni Savarese said.

Blanco’s goal came in the 58th minute and the result of a terrible back-pass by Seattle defender Yeimar Gomez Andrade. His pass for goalkeeper Stefan Cleveland was too soft and Portland’s Felipe Mora was able to get to it before Cleveland. With the Seattle goal open, Mora centered a pass to Blanco for the easy goal.

Mora’s goal came with Seattle (12-4-6) pressing for an equalizer and Cleveland caught out of his net.

Blanco suffered a torn ACL against Seattle in September 2020. But Blanco said he had mixed emotions on the day after seeing teammate Eryk Williamson go down with a serious knee injury in the 10th minute of the match. Williamson’s leg buckled awkwardly as he planted his foot and immediately went down in pain. Savarese said it appears to be a serious injury but the team doesn’t have a final diagnosis yet.

"I have so many sensations today," Blanco said. "Almost a year from my worst moment in my career, to come back with a goal, with the victory makes me feel happy but also I feel very sad for Eryk."

Getting the win meant Portland had to withstand a flurry of attempts from Seattle in the final 35 minutes. Shane O’Neill had a header off the post. João Paulo, who earlier in the second half had a volley hit the crossbar, had another shot from distance punched away at the last second by Portland goalkeeper Steve Clark.

Cristian Roldan rattled the crossbar again in the 85th minute with a header, and Clark made a lunging fingertip save of Raúl Ruidíaz’s attempt a minute later. Despite having 16 total shots and five on target, the Sounders failed to beat Clark.

It was Seattle’s first loss since a 1-0 home defeat to San Jose on July 31.

"We have to be a little more clinical," Roldan said. "The reality is we hit the post a couple of times. We were inches away from getting a goal and getting back in the game. ... In reality we should tie that game or win that game."

The Cascadia showdown was the back end of a doubleheader featuring the MLS and WSL teams from the two cities. Earlier in the day, the OL Regin beat the Portland Thorns 2-1 behind two goals from Megan Rapinoe before the largest single-game crowd in NWSL history with 27,248 in attendance.

Nearly 20,000 more showed up for the nightcap, Seattle’s largest crowd since the 2019 MLS Cup.