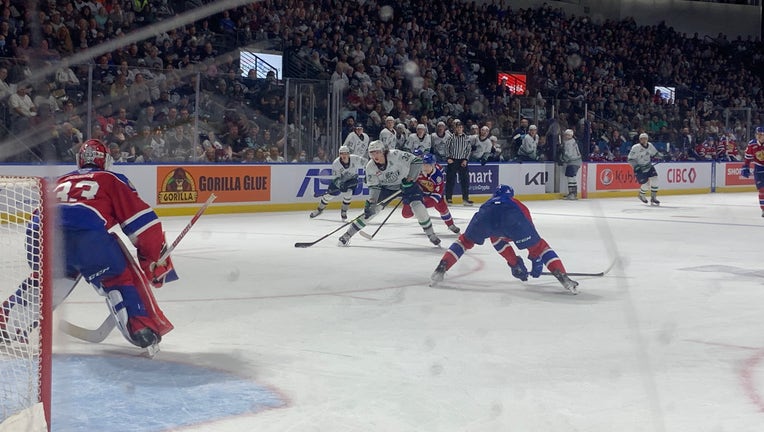 Matthew Rempe (No. 32) of the Seattle Thunderbirds gets a look on net against Braeden Wynne (No. 8) and goalie Sebastian Cossa (No. 33) of the Edmonton Oil Kings in Game 3 of the WHL Championship Series on June 7, 2022 at the accesso ShoWare Center i (photo by Curtis Crabtree / FOX 13 Seattle)

KENT, Wash. - The Seattle Thunderbirds were shut out 4-0 by the Edmonton Oil Kings in Game 3 of the WHL Championship Series on Tuesday night.

Detroit Red Wings first-round pick Sebastian Cossa had 21 saves on the night for Edmonton as the Thunderbirds were unable to generate any offense in their first home game of the series. It was Cossa's fourth shutout of the playoffs for Edmonton.

"We have to flush this game," head coach Matt O'Dette said. "The turnaround is less than 24 hours. So we have no time to feel sorry for ourselves. Regroup, obviously, make some adjustments, watch the video. But we've been resilient team all year. It's another opportunity to show that again."

Jakub Demek, Simon Kubicek, Kaiden Guhle and Carter Souch each scored for Edmonton as they take a 2-1 lead in the series with Game 4 set for Wednesday night.

The contest was extremely even for nearly two full periods before Edmonton pulled away. The first period went scoreless for the third time in as many games in the series with neither team able to land a punch. After 30 minutes, it was still scoreless with both teams having 14 shots without one finding the back of the net.

With Josh Williams off on a high-sticking penalty, the Oil Kings got a prime chance short-handed. Jake Neighbours and Jalen Luypen sprung a 2-on-0 breakaway chance with Neighbours crossing to Luypen and back to Neighbours for the shot on net as Thomas Milic snared the puck with his glove to keep the game scoreless.

"He's been playing well all series and he's a tough goalie to beat," Neighbours said of Milic's save. "You know, I think as players we did our job on that one. It was just a little tight to him, couldn't get up in time but you know, it's obviously a big save by him and the crowd got big, nice and loud after that, and I thought we did a good job of responding and finishing that kill though."

However, Edmonton finally struck less than two minutes later. Jakub Demec picked up a pass from Simon Kubicek in the Oil Kings zone and went the length of the ice, beating defenseman Jeremy Hanzel and cutting across the front of the net to beat Milic and make it a 1-0 game with 2:58 left in the second period.

"I thought the turning point was the goal right after our power play," O'Dette said. "That was a momentum swing for them and we sagged a little bit after that and couldn't mount a push in the third period."

A deflected shot in front of the net from Nico Myatovic slid past the goal post in the first minute of third as the tried to answer. Reid Schaefer got a backhand chance on Cossa that created a rebound opportunity that kicked out of the zone and gave Edmonton a chance at the other end. Ryan Gottfried picked up a cross-checking penalty for Seattle's fourth infraction of the night and the Oil Kings capitalized almost immediately.

Off the ensuing face-off Kubicek was left open on the back door and a beautiful pass between the legs from Luypen gave Kubicek a wide open look that beat Milic and made it a 2-0 game with 15:50 remaining.

Guhle then added to the total with a clean look from the high slot against Milic that beat him stick side through traffic and made it a 3-0. Souch added an empty net tally in the final minute of play to set the final margin.

Mlic had 33 saves on the night in the losing effort for Seattle.

"I think our (defense) do a pretty good job of limiting those chances but when chances like that 2-on-0 come up, you know, I think that's something I'm capable of making those big saves and just do whatever I can to keep the team in the game and push the momentum back in our favor," Milic said.

The Thunderbirds have been out-shot in all three games of the season by a significant margin. Despite the win in Game 1, they were out-shot by a 44-22 margin with Milic delivering 43 saves in the victory. Edmonton had a 41-30 margin in Game 2 and a 37-21 margin in Game 3.

Game 4 will be the final game of the series at home for the Thunderbirds as Games 5-7, if necessary, will all be played in Edmonton due to building conflicts at the accesso ShoWare Center. Sebastian Cossa (No. 33) of the Edmonton Oil Kings holds the puck after a chance in front of the net by the Seattle Thunderbirds in Game 3 of the WHL Championship Series on June 7, 2022 at the accesso ShoWare Center in Kent, Wash. (photo by Curtis Crabtree / FOX 13 Seattle)