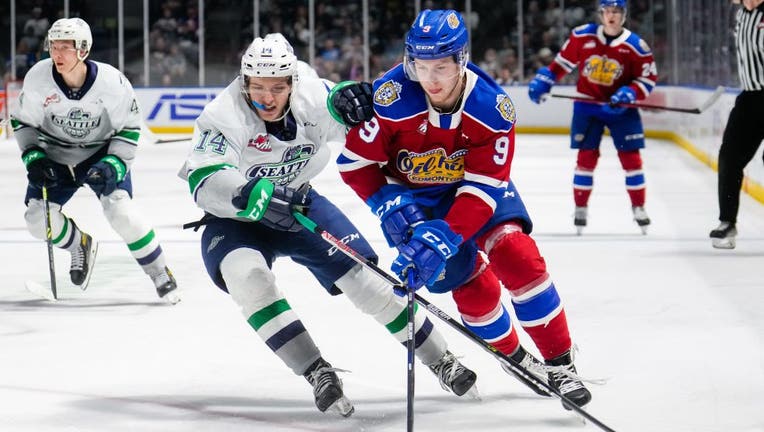 KENT, WASHINGTON - JUNE 07: Kevin Korchinski #14 of the Seattle Thunderbirds tries to poke the puck away from Carson Golder #9 of the Edmonton Oil Kings during the third period of Game 3 of the Western Hockey League Championship at accesso ShoWare Ce

Two members of the Seattle Thunderbirds – defenseman Kevin Korchinski and left winger Reid Schaefer – were selected in the first round of the NHL Draft on Thursday night.

Korchinski was selected by the Chicago Blackhawks with the seventh overall pick. Chicago acquired the No. 7 pick earlier in the day in a trade with the Ottawa Senators that sent star right winger Alex DeBrincat to the Senators for the No. 7 pick, No. 39 pick (second round) and a 2024 third-round pick.

Schaefer ended up being the final selection of the first round, going 32nd overall to the Edmonton Oilers. Schafer is a native of Spruce Grove, Alberta, which is a suburb of Edmonton.

Korchinski was projected as a potential top 10 selection and was viewed as the best left-handed shooting defenseman in the draft. Slovakia's Simon Nemec (No. 2 overall - New Jersey Devils) and Czechia's David Jiricek (No. 6 overall - Columbus Blue Jackets) were the two defenseman to be selected before Korchinski, but both Nemec and Jiricek are right-handed shots.

Korchinki had four goals and 61 assists from the blue line for the Thunderbirds. His 65 points ranked fifth on the team behind Jared Davidson, Lukas Svejkovsky, Conner Roulette and Henrik Rybinski.

Schaefer was sixth in points, just behind Korchinski. Schaefer posted 58 points with 32 goals and 26 assists this season for Seattle.