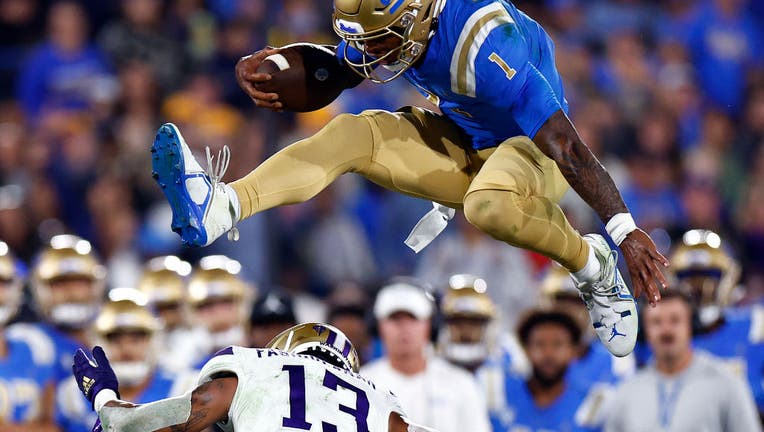 PASADENA, CALIFORNIA - SEPTEMBER 30: Dorian Thompson-Robinson #1 of the UCLA Bruins jumps over Kamren Fabiculanan #13 of the Washington Huskies in the second quarter at Rose Bowl Stadium on September 30, 2022 in Pasadena, California. (Photo by Ronald

Dorian Thompson-Robinson had read and heard the comments about UCLA’s unbeaten start not meaning much due to the quality of opponents it played.

On Friday night, Thompson-Robinson and the Bruins made sure to make a statement with their first victory over a top-15 team since 2014.

Thompson-Robinson passed for 315 yards and three touchdowns in UCLA’s 40-32 victory over No. 15 Washington in a matchup of unbeaten Pac-12 teams at the Rose Bowl.

"People were saying all week that we’re the worst 4-0 team out there and writing us off. I think my boys came here with a chip on their shoulder," said Thompson-Robinson, who had the sixth 300-yard passing game of his career. "I think I told y’all on Monday, see if Washington can run with us, not the other way around."

The fifth-year senior also ran 2 yards for a score in the third quarter, when he sidestepped defenders Bralen Trice and Jayvion Green, causing them to fall on one another in a heap near the goal line in making it 33-10.

Thompson-Robinson supplied the highlight plays, but plenty of other Bruins contributed to give them their first 5-0 start since 2013.

Zach Charbonnet rushed for 124 yards and a score, Jake Bobo had six receptions for 142 yards and a pair of TDs while the Bruins recorded their first safety in four years and forced a pair of turnovers.

"Our defense did a great job in the first half. For them to stake us that lead when we needed every inch of it," coach Chip Kelly said. "Dorian was clutch. We have total confidence in everything that he does."

The Bruins have also won eight straight dating to last season — their longest unbeaten streak since 2005. They have scored at least 40 points in six of those victories.

Washington’s Michael Penix Jr. came into the game leading the nation in passing yards but struggled in the first half as UCLA (2-0 Pac-12) scored on four straight drives and jumped out to a 26-10 halftime lead.

"We dug ourselves too big of a hole in the first half," coach Kalen DeBoer said. "Our guys now realize is that we’re a team that people are gonna get up to play. Not that we went into the game thinking otherwise, but we got to emotionally and physically be ready to play."

Penix finished 33 of 48 for 345 yards, four touchdowns and two interceptions. The junior passed for a pair of touchdowns and 2-point conversions in the fourth quarter as the Huskies got within eight, but UCLA ran out the final three minutes.

Rome Odunze had eight receptions for 116 yards and two touchdowns.

"Just wasn’t executing. We got to do better," Penix said. "Me myself personally, I got to take care of the ball better. And that’s really all it was, just poor execution."

Washington (4-1, 1-1) appeared to be rolling early after it took the opening kickoff and scored 10 plays later when Odunze beat safety Devin Kirkwood in single coverage and hauled in a 33-yard touchdown pass on fourth-and-6.

The Bruins drove to the 3 on its opening drive, but turned it over on downs after three straight incomplete passes. Two plays later, the defense came up with its first big play when Penix botched a pitch and linebacker Laiatu Latu tackled Wayne Taulapapa in the end zone.

Latu, who also had three tackles and a sack, began his career at Washington before transferring this year. It was UCLA’s first safety since the 2018 season finale against Stanford.

After the free kick, the Bruins went 93 yards in 11 plays, which culminated in Charbonnet scoring from a yard to give them a 9-7 lead. That marked the first time that Washington had trailed in a game this season.

The Huskies regained the lead on Peyton Henry’s 50-yard field goal before the Bruins scored 24 straight points. Bobo caught a 12-yard strike midway through the second quarter to give UCLA the lead for good. One play after Stephan Blaylock picked off Penix and returned it to the UW 15, Thompson-Robinson found Kam Brown alone in the end zone to extend the lead to 23-10.

Washington: The Huskies were ranked near the bottom of the conference in pass defense as their secondary had plenty of problems trying to contain Thompson-Robinson and Bobo.

UCLA: The Bruins had lost 11 straight games against top- 15 foes, including two to the Huskies, before Friday night’s win. Their last win was in the Alamo Bowl against No. 11 Kansas State to wrap up the 2014 season. UCLA’s last victory against a top-15 Pac-12 team was also in 2014 against No. 14 Arizona.

UCLA had not received many votes due to playing the softest nonconference schedule of a Power Five team, but the win over the Huskies should give them plenty of momentum to jump into the rankings. A late fourth-quarter rally should keep Washington in the poll.

Washington: At Arizona State next Saturday.

UCLA: Hosts No. 12 Utah next Saturday.