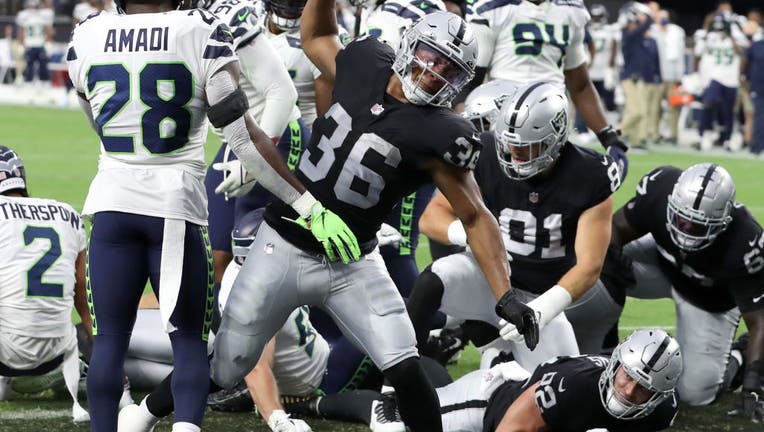 LAS VEGAS, NEVADA - AUGUST 14: Running back Trey Ragas #36 of the Las Vegas Raiders spikes the ball in the end zone after scoring on a 1-yard touchdown run against the Seattle Seahawks during a preseason game at Allegiant Stadium on August 14, 2021 i

"That’s kind of when I play at my best," Peterman said.f

Peterman completed 29 of 38 passes for 246 yards, leading the Raiders to a 20-7 victory over the Seattle Seahawks.

"Every time you go out there — whether it’s preseason, practice, whatever it is — I’ve always got something to prove I feel like," said Peterman, who fell one snap shy of becoming the only quarterback in the NFL to play the entire game in Week 1 of the preseason. "That’s what it was today, and just happy to go out there and have some fun and get a win."

RELATED: Exclusive: Tre Brown on the culture of Seattle and the team

Case Cookus replaced Peterman after the two-minute warning to hand the ball off to fullback Garrett Groshek in his only play.

"Nate Peterman is a true professional, he takes his job very seriously, he loves the game of football, he loves to compete at a high level and he cares for his teammates," said wideout Zay Jones, who finished with three receptions. "When he’s in the huddle, when he’s out there on the field, he’s gonna do the best that he possibly can."

With a lot of talk at the start of training camp about improving in the red zone, the Raiders posted two touchdowns and two field goals in their four trips inside Seattle’s 20-yard line.

"We want to be four out of four, we’ll hopefully get better and better as the season goes on," Raiders coach Jon Gruden said.

Geno Smith started at QB for the Seahawks. He went 4 of 10 for 46 yards before leaving with a concussion in the first half.

Alex McGough replaced Smith and was 6 of 10 for 54 yards with one touchdown. Sean Mannion finished for Seattle, completing 5 of 8 for 15 yards.

Coach Pete Carroll said Smith was OK right after Raiders defensive back Nate Hobb sacked him from the blindside, but the concussion got worse.

"It just kind of progressed after he went back in and we had to take him out," Carroll said. "He wasn’t ready to play."

McGough took advantage of blown coverage and hooked up with DeeJay Dallas for a 43-yard TD in the third quarter.

The Raiders played in front of a home crowd for the first time since relocating from Oakland. It had a crowd in just three road games last season and went 2-6 inside its empty 65,000-seat Allegiant Stadium with fans barred due to the COVID-19 pandemic.

With a mask mandate in place for the preseason opener, Raiders owner Mark Davis wouldn’t commit to requiring fans to provide proof of COVID-19 vaccination or a negative test when the Raiders open the regular season Sept. 13 against Baltimore.

"Health and safety will always be No. 1," he said. "The masks mandate is a good idea. I don’t know how you can actually police it. If 100 percent of people are wearing masks, then we’re on to something. If not, we might have to take a little tougher approach. What we don’t want is to get back to (limited) attendance capacities. We want to be full capacity at all times."

Carroll spoke about Aldon Smith for the first time since the embattled defensive end was released on Wednesday. Smith signed a one-year deal with Seattle in April but he was arrested two days later on a second-degree battery charge in St. Bernard Parish near New Orleans. He is scheduled to be arraigned later this month.

"He just couldn’t hang with us," Carroll said. "He tried, he just couldn’t make it happen. It is disappointing. I’m disappointed for him because we gave him a real chance, and we looked after him in every way that we knew how to do it. I wish we had done better."

The Seahawks host the Denver Broncos next Saturday.

The Raiders head to Los Angeles on Wednesday to practice with the Rams. The teams play next Saturday at SoFi Stadium in Inglewood, California.