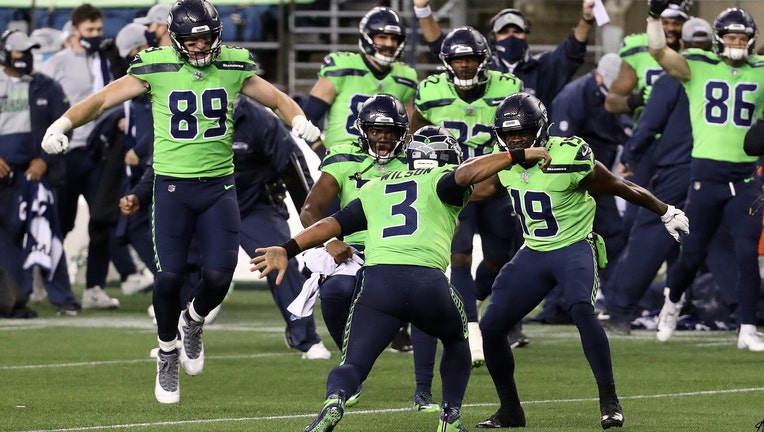 SEATTLE - Be honest, did you question if the Seahawks could pull off a miracle comeback Sunday night against the Minnesota Vikings?

The 12s are still catching their collective breath, after another thrilling win on national television. The Seahawks are undefeated and 5-0 for the first time in team history.

As we learned again, the Seahawks just keep believing. Maybe in a year that has been so challenging for so many, there's an important takeaway in that for the rest of us.

On a night when so many things seemed to go wrong, in the end, everything needed to go right for the Seahawks to pull off a win.

First, an essential stop on defense with the Vikings going for it on fourth and inches.

With the game on the line, Wilson again found Metcalf in the endzone on fourth and goal.

“Just speaking to our fans," Seahawks Head Coach Pete Carroll said after the game. "I hope you had a ball with it at home and I hope you guys believe like our guys believe.”

And there’s that word, "belief,"  that we just kept hearing.

Russell Wilson was mic’d up for the game. We were listening. He never wavered.

“Everybody believing in the moment. The moment’s never too big and we stayed the course," said Wilson.

And when your quarterback believes, it becomes contagious.

“Anytime 3 (Wilson's number) is in the huddle, we have a chance," Metcalf, who scored two touchdowns, including the game-winner, said. "Our chance of winning goes extremely high.”

Terry Hollimon, who played running back for the University of Washington, talked about the importance of positive thinking coming from leaders.

“Starts off with a leader in your locker room or your coaching staff who gives you a vision. Something to buy into. Something to believe in,” Hollimon said.

Hollimon pointed out that we can’t all play like Russell Wilson, but we can think like him.

“That is something we can all take," Hollimon said, "It’s never too late for any of us, as long as we have time on our clocks, we can keep fighting.”

And just maybe that’s the lasting lesson in Sunday night’s thriller: that during these tough times, believing that no odds are too great and no challenge is too tall, that like the Seahawks, we too can come out on top.

If you would like to hear Russell Wilson mic'd up for the game against Minnesota, just tune into Seahawks Saturday Night on Q13 FOX, this Saturday, October 17, at 10:30 p.m.