Paul Allen died Monday at the age of 65.

Read more: ‘A giant in Washington history’: Paul Allen, co-founder of Microsoft and owner of Seahawks, dead at 65 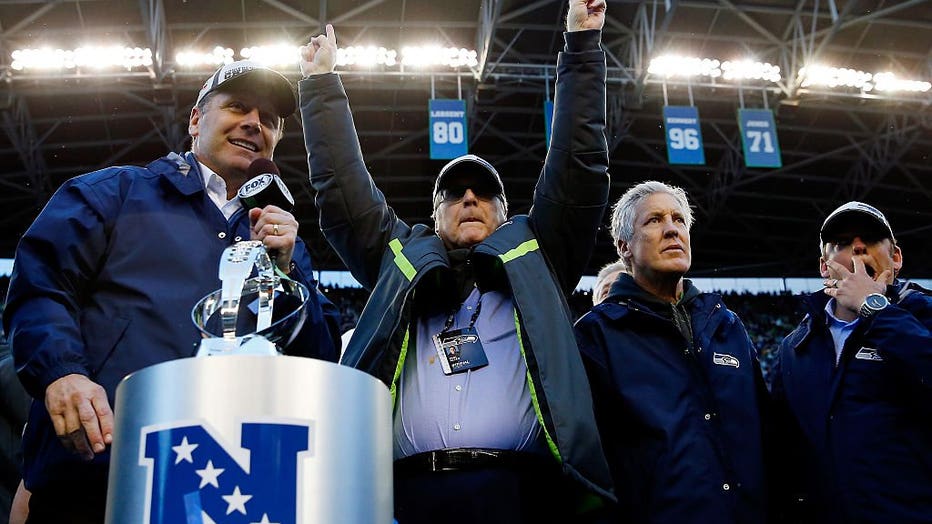 All this week, the Seahawks are recognizing Paul Allen's 20 legendary years as owner of the franchise.

Q13 News has partnered with Vulcan Productions to air a video series and a 30 minute documentary called "Moment in Time: Seattle Seahawks Allen Era 20 Year Anniversary." The Seahawks have launched a new page celebrating Allen,  and are giving away a special VIP Gameday Experience to one lucky fan.

The celebration will culminate with a pregame ceremony ahead of Sunday's home opener against the 49ers at CenturyLink Field.

For younger 12s, the celebration serves as a time to learn more about Paul Allen and what he's meant to the hometown team.

While many know him as the owner of the Seahawks and the co-founder of Microsoft, it's easy to forget that Allen didn't just build the legendary franchise we know today - he also saved football in Seattle.

How Paul Allen saved the Seahawks

How Paul Allen saved the Seahawks

"I think you better get over here. We're moving."

For much of the 1980s and 90s, the team downright struggled.

By 1996, the Hawks were in the midst of their sixth consecutive losing season.

Then-owner Ken Behring sought a change, and moved the team's operations to Anaheim, California. It wasn't long before moving vans showed up at the Seahawks' practice facility in Kirkland.

"I got a call from an assistant coach and he said, 'I think you better get over here. We're moving,'" Seahawks announcer Steve Raible recalled.

On Feb. 2, 1996, Behring officially announced he would move the team to California.

"It was one of the saddest days of my life," Raible said.

But there was a push to keep the Seahawks in the Emerald City. King County sued Behring in an effort to stop the move. The team's move was temporarily blocked, and officials and fans scrambled to find a new owner who would buy the team and keep it local.

Potential buyers were not easy to find.

"It's hard in 2017 to understand in 1997 nobody who had resources wanted to put that money into a franchise," King County Councilmember Pete von Reichbauer said.

King County Executive Gary Locke and Reichbauer pushed to meet with the only local person with the resources and the knowledge to save the Hawks:

A local steps up

Allen is a Seattle native.  An overwhelming successful businessman, Allen cultivated his business life in the city. He already owned one sports team: the Portland Trail Blazers.

He was the best option - and likely the only option.

"At the end of the day, there was no Plan B," Reichbauer said. "There was only Plan A, and Plan A was Paul Allen."

Allen stepped in and bought the team for $200 million in 1997. Allen said in his memoir he was not much a football fan, but did it out of allegiance to the city.

"Sports really brings a community together," Allen said. "Given my long history with this community, I felt it would be a great thing to keep the team in Seattle."

Allen's deal was contingent on a public-private sponsorship to fund a new stadium to replace the crumbling Kingdome. State Referendum 48 authorized public funding for a new stadium. Allen funded the cost of the election, and helped create advertisements.

But in order for the Seahawks to succeed in the future, he knew public involvement was of paramount importance.

"Sports really brings a community together."

"If you say no," Allen said in a 1997 campaign add supporting the funding, "That means no for me, too. Because I'm not going to do this without you."

"In the end, the love of the Hawks, and the understanding that this was a big deal for our city, our county, our region was able to lead us to victory," King County Councilmember Jeanne Kohl-Welles said.

The Seattle Kingdome came down in 2000. It wasn't long after that a winning culture for the Seahawks was built.

In dreaming up CenturyLink Field, there were a couple of major priorities. First, Paul Allen and his partners wanted every seat in the stadium to have great site lines.

Second, they wanted it loud.

"That (the Super Bowl) was shared with the entire community."

CenturyLink Field opened to the first preseason game on Aug. 10, 2002. Immediately, players and fans knew it was a special place.

The Hawks quickly made CenturyLink Field the team's home, from the roar of the fans to the raising of the 12 Flag before the game.

"All this great stuff made it the best place to watch a football game in the entire NFL," former Seahawks quarterback Matt Hasselback said.

As CenturyLink Field went up, so did the Seahawks' winning ways. Allen brought in Super Bowl winning head coach Mike Holmgren in 1999. Stars like Hasselbeck, future Hall of Famer Walter Jones, Sean Alexander and others were fostered. The team's stock rose quickly throughout the early 2000's, under Allen and his hand-picked leaders.

"Mike Holmgren really put his fingerprints on this organization, and started to build a contender every year, building through that 2005 season," Raible said.

In 2005, the Hawks had their best season in franchise history to that point, and CenturyLink induced the most opponent false starts in the history of the NFL.

The Hawks lost to the Pittsburgh Steelers in Super Bowl XL, but it wasn't long before the team would reach even greater heights. Head coach Pete Carroll was hired in 2010.  General Manager John Schneider was hired a short time later.

Under a fast, relentless defense and a young quarterback out of Wisconsin, the Hawks made it back to the Super Bowl in 2013. This time, there was no question of penalties, and the Hawks demolished the Denver Broncos, 43-8.

"That (the Super Bowl) was shared with the entire community," Raible said.

The future looks bright for the Seahawks. Young players, an experienced quarterback, a core of defensive players who are among the most feared in the league.

The team gels well, most analysts agree, and that mood comes from the top down.

"We love playing for (Allen)," Wilson said. "He's one of the best owners in the league."

The Hawks gel off the field, too. From scholarships to community service, the team and organization gives back to the city they fought to stay in 20 years ago.

"There's an unusual bond between this team and the community that you rarely see in sports," Allen said. "The players can feel the love from the public and I think the fans can feel that connection, too."

Players agree. Without Allen, a different attitude might prevail.

"I think Paul sets the tone," defensive end Michael Bennett said. "You see him making an impact on every single level, locally to globally."