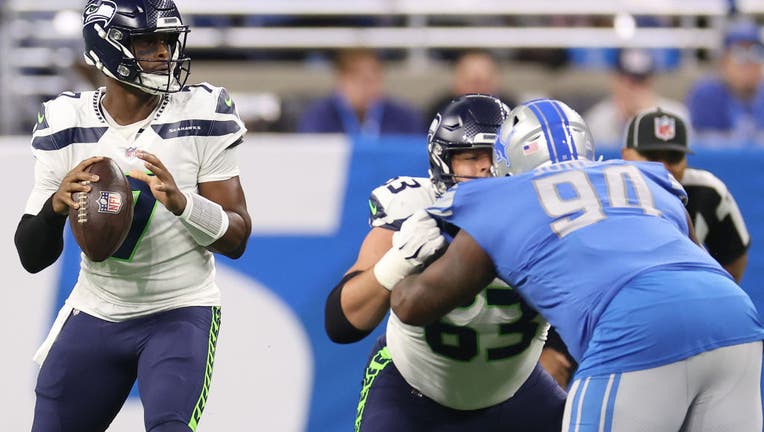 DETROIT, MICHIGAN - OCTOBER 02: Geno Smith #7 of the Seattle Seahawks looks to pass the ball during the first quarter of the game against the Detroit Lions at Ford Field on October 02, 2022 in Detroit, Michigan. (Photo by Gregory Shamus/Getty Images)

The 48-45 victory by the Seattle Seahawks over the Detroit Lions on Sunday seemed to put a magnifying glass on every aspect of what the Seahawks are through the first four weeks of the season.

The good, the bad, it was all amplified in the victory over the Lions. The strong play of the offense and quarterback Geno Smith continued to look very strong against Detroit. The tackling issues, run game concerns and inability to get off blocks on defense looked that much worse as the Lions put up 520 yards and 45 points against Seattle's defense despite being down three key pieces.

Many of these items were on display through the first three weeks of the season for Seattle, but the performance in Detroit on Sunday really highlighted what the Seahawks are through the opening month of the year.

Here are the takeaways from Seattle's 48-45 victory over the Lions:

Geno Smith, Rashaad Penny and the Seattle offense were consistent, productive and explosive in running up 555 yards and 41 points against the Lions (seven points were scored by the defense). It's the fifth-most yards in a game for the Seahawks and the third-most in a game that didn't go to overtime.

For the first time in franchise history, the Seahawks played a game without punting a single time.

Head coach Pete Carroll keeps coming back to the way Smith is managing the game, getting the right calls made at the line of scrimmage, and checking out of certain plays when necessary.

"It really felt like we had it rolling. Geno played spectacular football. Spectacular football," Carroll said. "Not just the throwing and the catching, but the command of the game and running the whole show. He did an incredible job and he ran the ball too for 50 yards or something. It's a fantastic day. I don't know how you could do a whole lot more, play a whole lot better than that."

"There was a moment in this game when the crowd was as loud as it could have possibly been for that day and he had to do something at the line of scrimmage and he got it done. Everybody executed and we really cashed in in a huge way," Carroll said.

But even with the success so far, Smith said he's not surprised by what he's been able to accomplish.

"No, I can play better. Definitely not exceeded my expectations. I can play a lot better," he said.

Smith has been incredibly solid through four games as Seattle's quarterback. He leads the NFL in completion percentage at over 77 percent and has now begun to start finding the explosive plays in the passing game that  Carroll covets. Seattle had eight plays of at least 23 yards in the victory on Sunday with five coming on Smith completions.

"He's just been incredible throughout the whole year," said DK Metcalf, who had seven receptions for 149 yards.

Additionally, Smith was not sacked once in the win over the Lions. He had only been sacked six times through the first three games of the season as well as rookie tackles Charles Cross and Abe Lucas have really played quite well in the opening games of their careers. Smith has had plenty of time to work in the pocket throughout the season and has shown he can make plays happen when he's given room to work.

"The guys up front did a great job. No sacks today. We rushed for 230-something (235). Those guys did a great job. Really proud of the way they played. And we'll hopefully keep making progress."

The Lions did a good job of slowing down Penny and Seattle rushing attack early in the game. Penny had just eight yards on five carries at halftime. Rookie Ken Walker III had 16 yards on his two attempts int eh half. But when the dam broke, Penny was ready to go.

After an audible at the line of scrimmage from Smith, Penny sprung free for a 36-yard touchdown run on a third-and-16 handoff late in the third quarter. Penny evaded a tackle downfield and scored to give the Seahawks a 38-25 lead. He similarly found open turf on a third-and-5 run that went for a 41-yard score with 2:14 remaining that was the decisive points for Seattle in the victory.

"That's that's the guy that just jumped out at us at the end of last season, man, and we just got to keep going and giving him chances because he's got those huge plays in him. That's how you rush for a bunch of yards. You've got to get some big ones."

Seattle finished with 235 rushing yards on the day with Penny leading the way.

Poor tackling was a problem for the Seahawks throughout the preseason. Though some of those issues could be explained away to coming from players that aren’t a part of the actual roster now, the problem surfaced again on Sunday.

The most notable example came on an 81-yard catch-and-run from Lions tight end T.J. Hockenson. Safety Josh Jones whiffed with a diving attempt after the catch on a crossing route. Jones’ missed tackle came nine yards from the line of scrimmage.

Linebacker Cody Barton then feebly tried to shove Hockenson out of bounds up the sideline without success. That attempt came 22 yards from the line of scrimmage as he couldn’t get off a block to make the play.

Hockenson rumbled nearly 60 more yards downfield before Barton and Tariq Woolen combined to get Hockenson on the ground and save a touchdown. It was only temporary, however, as Detroit scored two plays later.

– Defense remains the major issue for the Seahawks.

The Lions had to play without starting running back D'Andre Swift and receivers Amon-Ra St. Brown and D.J. Chark on Sunday.

Three really talented players that Detroit didn't have available against the Seahawks.

Seattle allowed 520 yards on offense to the Lions anyway with those three players in street clothes.

"We didn't do well," Carroll said. "We gave up 10-11 explosive plays. And on a day when the offense had 14, we give up like 10 or something like that. There are just too many chunk yards and a crazy 80-yard play and a couple others that they had. We just have to get those out of our football."

Where the Seahawks had eight plays of at least 23 yards, the Lions answered with seven plays of at least 21 yards. Jamaal Williams, starting in place of Swift, sprung free into the Seattle secondary for a 51-yard touchdown as part of his 108-yard performance on the day. Hockenson added a 32-yard touchdown and a 24-yard reception to his 81-yard romp through the defense.

The Seahawks have just been pushed around far too easily through the first four weeks of the season.

The run defense is especially concerning. Seattle is allowing over five yards per carry on the season so far and over 140 yards on the ground each of the last three weeks. The unit did seem to perform better early in the contest with Darryl Johnson starting in place of Darrell Taylor at outside linebacker. However, Johnson left the game with an ankle injury and the Lions – as every team Seattle has faced so far this season has done – began running right at Taylor. Williams' 51-yard touchdown run came on a run right at Taylor's edge of the line of scrimmage.

"Of course we're worried but I don't want to say we're going to panic," safety Quandre Diggs said. "We've got a lot of young guys out there and we just have to pick up the small details of things. You can erase 24 or so of those points if we don't have penalties, if we play smarter on down-and-distances. … It's just small things that you got to be in tune with the game and I don't think we're there yet."

Rookie cornerbacks Coby Bryant and Tariq Woolen each made big plays that helped Seattle do enough to earn the victory. Bryant forced a fumble by receiver Khalif Raymond that went for a turnover and Woolen intercepted Goff and returned it for a 40-yard touchdown. The two turnovers proved highly critical to the team escaping Detroit with a victory.

But they were some of the only highlights of another anemic performance from Seattle's defensive unit.

"We've got work to do," Carroll said. "I'm gonna get after the film and see what happened and we'll just keep working. We got a lot of work to do."