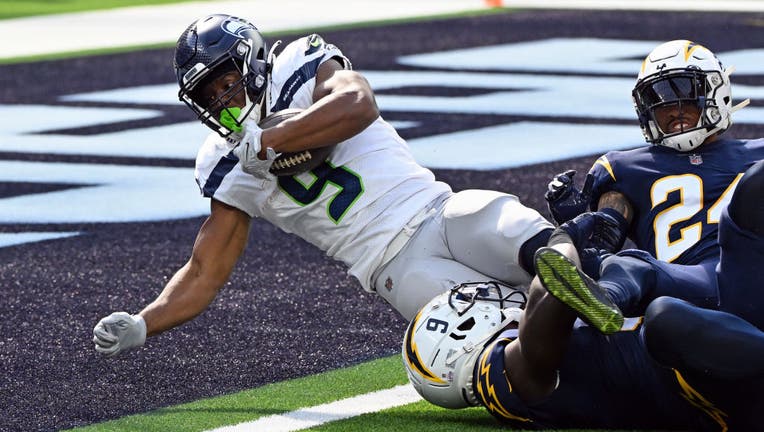 INGLEWOOD, CA - OCTOBER 23: Seattle Seahawks running back Kenneth Walker III (9) dives over the goal line for a touchdown during the first half of an NFL football game against the Los Angeles Chargers played on October 23, 2022 at SoFi Stadium in Ing

The Seattle Seahawks have sole possession of first place in the NFC West.

"It feels really good because, I mean, let's just be honest, didn't nobody think we were going to be s---. It feels good to come out here and show people that we're something to play with," safety Ryan Neal said.

The Seahawks played perhaps their most complete game of the season in a 37-23 victory over the Los Angeles Chargers on Sunday. Geno Smith threw a pair of touchdowns to Marquise Goodwin and rookie running back Ken Walker III exploded for 168 yards and two touchdowns to carry the offense to another 30-point day.

It's the third time in four games Seattle has scored over 30 points.

Meanwhile, the defense held the Chargers to just 53 rushing yards for the game and forced a pair of turnovers from quarterback Justin Herbert that directly led to 10 points.

The game would have been a complete blowout if not for a pair of errors with the football. A second quarter fumble by Dee Eskridge on a pitch from Smith allowed the game to be much closer than it otherwise should been as it gave the Chargers a short field for a touchdown. Also, DeeJay Dallas allowed a punt to bounce down to the 2-yard line that led to a safety.

But it was still the most balanced production the team has had through seven games this year. If the defense had figured its issues out a bit quicker, the Seahawks could realistically be a 6-1 team. The 4-3 record and division lead will have to be good enough for the time being.

"I really liked us today. I liked the way we played. I thought you could feel this in all three phases. We were humming," head coach Pete Carroll said.

Here are the takeaways from the Seahawks win in Los Angeles:

Second-round pick Ken Walker III became just the second rookie in franchise history to rush for at least 150 yards with two touchdowns in a game.

Walker joins Curt Warner, who rushed for 203 yards and three touchdowns in a 51-48 overtime win over the Kansas City Chiefs in 1983.

The highlight of Walker's day was a 74-yard romp through the Chargers' secondary that effectively put the game away with seven minutes left to play. Walker took a pitch around the right side and exploded through a crease in the L.A. defense as he ran 60 yards clear behind the last defender for the score. The touchdown is the eighth-longest in franchise history.

"I don't think anybody touched him," Carroll said. "He certainly has big play ability. You can see the speed that he has, it wasn't even in doubt. And that's really exciting to see that happen."

Per NFL NextGen Stats, Walker reached 22.09 mph on his touchdown run, which is the fastest speed reached by a ball-carrier in the NFL this season.

"It's a great feeling because it's rare. It doesn't really happen much in football. So when you get the opportunity, you've got to make the best of it," Walker said.

Walker's 12-yard touchdown in the first quarter gave Seattle a 14-0 lead and showed similar explosion as he sliced through the middle of the Chargers defense for the score.

Walker has taken the lead running back role for Seattle after Rashaad Penny was lost for the season two weeks ago to a fractured leg. All Walker has done the last three weeks is rush for a combined 353 yards and four touchdowns.

"That dude is special, man" Smith said. "Ken is a special player. You can just see the look in his eyes. He's focused and all he needs is a crease and he can be gone.

"Having a guy like that who can explode at any minute is awesome."

Last week's performance against the Arizona Cardinals showed the potential for improvement on the defensive side of the ball. A schematic shift along the line of scrimmage paid off with Seattle's defense racking up six sacks of Kyler Murray and holding Arizona running backs to 44 yards on 17 carries.

The improved play continued against the Chargers on Sunday. Ryan Neal intercepted Justin Herbert to set up an early Seattle touchdown and Darrell Taylor delivered a strip-sack of Herbert that led to a field goal.

But beyond the turnovers, the Seahawks really clamped down on an offense with high-caliber weapons in Keenan Allen, Mike Williams and Austin Ekeler.

"To do it really two weeks in a row, even made more progress in this game, I think, all around," Carroll said. It feels good to our guys. They can feel it. They can feel their defense. They can feel what they're doing and how they fit together. And it's this is what can happen, you know, when you start moving. Wo we're really excited about it and looking forward to getting it going again next week."

The Seahawks combined for three sacks of Herbert, two turnovers on the day, and had a stretch of six straight drives where they kept the Chargers off the scoreboards with five punts and a turnover on downs.

So does Carroll think the Seahawks have genuinely gotten things fixed on the defensive side of the ball?

"I do. I really do. What's still all kinds of improvement out there," he said.

The holes in the running game through the first five weeks gave opponents the ability to run anything without imposition. Closing up the running game the last two weeks have forced teams to pass more and into longer yardage situations. The whole defense is now working together collectively.

"Just being able to get some stuff corrected throughout the week. It's finally coming together and I think we just were growing we were taking steps, we're making strides, and the only thing I could think of is just let's just get back and do it again. And just keep doing it and keep attacking," Neal said.

– DK Metcalf injury could be a significant blow to Seahawks.

Wide receiver DK Metcalf exited Sunday's game late in the first quarter and did not return due to a knee injury.

Metcalf appeared to be injured on a play late on a deep throw with two minutes left in the quarter as he was covered by J.C. Jackson. Nothing was obviously apparent for an injury, but the television broadcast later showed Metcalf being carted back to the locker room from the sidelines.

He was ruled out for the game shortly after by the Seahawks.

"He came down on his knee in an odd way. X-rays showed nothing there but we're going to have to take him back and get tested and checked out with MRIs and all that stuff to make sure," Carroll said.

Neal said that Metcalf was smiling in the locker room and told him he was alright.

"DK is in good spirits, he had a smile on his face, so I think we're going to be alright."

Nevertheless, the Seahawks will hope there isn't any serious damage in Metcalf's knee during his evaluations on Monday.

If Metcalf is forced to miss a significant amount of time, it would be a significant blow to the Seattle offense. Rookie Dareke Young is the only other receiver with size on the active roster. Tyler Lockett, Marquise Goodwin and Dee Eskridge are all smaller receivers in stature. And Lockett was questionable to play against the Chargers himself due to a hamstring injury.

Metcalf had just one catch for 12 yards in the game before being forced from the contest.