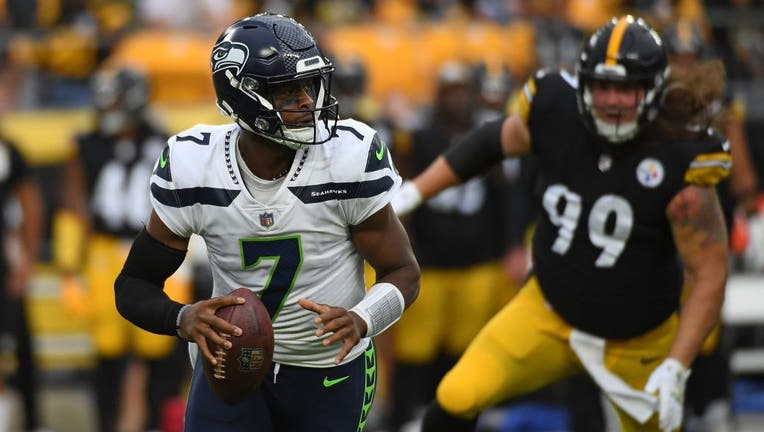 PITTSBURGH, PA - AUGUST 13: Geno Smith #7 of the Seattle Seahawks scrambles out of the pocket under pressure from Henry Mondeaux #99 of the Pittsburgh Steelers in the first quarter during a preseason game at Acrisure Stadium on August 13, 2022 in Pit

The Seattle Seahawks dropped their preseason opener against the Pittsburgh Steelers 32-25 on Saturday night. After two weeks of practices against only each other, it was the first benchmark outing against a team in different colors.

Here are some of the takeaways from what we learned in the game against the Steelers:

Nothing shown from either Geno Smith or Drew Lock will bring an end to the ongoing quarterback battle any time soon.

Both Smith and Lock played well in their preseason debuts against the Steelers. However, neither played so well as to stake a massive claim to the job either.

"Both quarterbacks were efficient, really," head coach Pete Carroll said. "Geno could have been 10-for-10. He had two drops and Noah [Fant]'s got to stay in bounds on the ball on the sidelines and he hits them all. We moved the ball around pretty good with Drew also. So can't wait to get after the film and all that."

The sack-fumble of Lock came when Mark Robinson was unblocked off the edge on Seattle’s final regular offensive play of the night as Lock got blasted and fumbled for a turnover back to Pittsburgh.

Carroll said that while he wasn’t sure, he believed that defender was on Lock to get handled. Lock confirmed as much after the game.

"I could have handled that better," he said. "Could have flipped the [protection], could have played it hot."

Both of Lock’s touchdown drives looked really poised. A strong touchdown throw to Young came against tight coverage near the goal line. The touchdown to Dallas was a perfect check down that allowed Dallas to turn it into a score.

"It was fun for my first game on this team," Lock said. "Yes, we'd like the score to be different and we like a couple things in that game that happened differently but overall, a lot of good. We can fix the things we need to fix."

With Sidney Jones and Artie Burns both sidelined for the preseason opener, rookies Coby Bryant and Tariq Woolen started at the two cornerback spots against the Steelers.

It was a good learning experience with ups and downs for both players in their professional debuts. Woolen had a missed tackle on a 24-yard run from Anthony McFarland on the third play of the game and then busted a coverage on a 13-yard touchdown pass to Gunner Olszewski.

Bryant also allowed a touchdown on a really nice throw from Mason Rudolph to George Pickens for a 26-yard score on a fade to the back corner of the end zone. Bryant was in good position on the play, but a push-off from Pickens that went uncalled helped create the space for the catch to be made.

"I thought they got beat around a little bit," Carroll said.

However, both players had positive moments too. Woolen held terrific trail position on a fade throw to Kevin Rader and had tight coverage on another completed pass over the middle later on. Bryant had some strong tackles too after moving into the nickel spot.

"Those guys can make all those plays. Every play that happened to them, they've been making (in practice). They'll do better," Carroll said.

The game against the Steelers seemed to be a fantastic opening impression for the new offensive line.

With rookies Charles Cross and Abe Lucas getting plenty of time at the tackle spots, the pass protection appeared really strong with many clean pockets for both Smith and Lock.

"I think they did a great job," Lock said of Cross and Lucas. "Those guys are in-tune to their stuff. They're really smart tackles, physical as can be. And I think if there wasn't a rookie sign on the roster you'd think they've been playing for a bit."

Additionally, the team rushed for 159 yards on the ground with many holes opened for the running back group.

"Our O-line was firing off the ball tonight. Hats off to those guys," Dallas said.

Smith was sacked just once on the night while Lock was sacked twice. Smith’s sack came late in the play after having a good pocket to work from but finding no one open to throw the ball. Lock’s first sack also came after having a clean initial pocket with pressure coming late after slipping a block from tight end Cade Brewer.

"I think throughout the game our protection was really good," Carroll said. And the times that we had rushes is when we got covered up a little bit, we didn't see what we needed to see and then we held the football and allowed them to rush it. The guys up front did a good job."

Phil Haynes started at right guard in place of Gabe Jackson with Austin Blythe at center, Damien Lewis at left guard and Jake Curhan at right tackle. Lucas then replaced Curhan at tackle with both rookies playing into the second half before exiting the game.

While a closer review of the game may yield a more nuanced thought on the performance up front, the initial look was quite strong.

Even with Rashaad Penny being held out, the trio of Ken Walker III, Travis Homer and DeeJay Dallas showed that the Seahawks running back group remains potent.

Walker had a nice debut with five carries for 19 yards and one reception for 11 yards while showing his athleticism.

Homer had a great 25-yard catch-and-run out of the backfield as a part of two receptions for 33 yards on the night as well as 41 yards on four carries.

Dallas led the group with 73 yards on 10 carries and a 17-yard touchdown catch as well.

All three backs had strong contributions to the offensive effort on the night. Throw in Penny, who has been one of the strongest performers in training camp this year coming off a great stretch run to last season, and the running back group appears to be really strong so far.

Second-round pick Boye Mafe had two sacks in his first outing for the Seahawks.

Mafe beat tackle Larry Ogunjobi to deliver a strip-sack to quarterback Mason Rudolph. With the game tied 25-25 with under 90 seconds left to play, Mafe struck again with a fourth down sack of Kenny Pickett, running down the first-round pick as he tried to escape to the sideline.

"A great stop by Boye Mafe on a beautiful play. He almost spoiled the Kenny Pickett night of nights. We're really glad to take part in that," Carroll said.