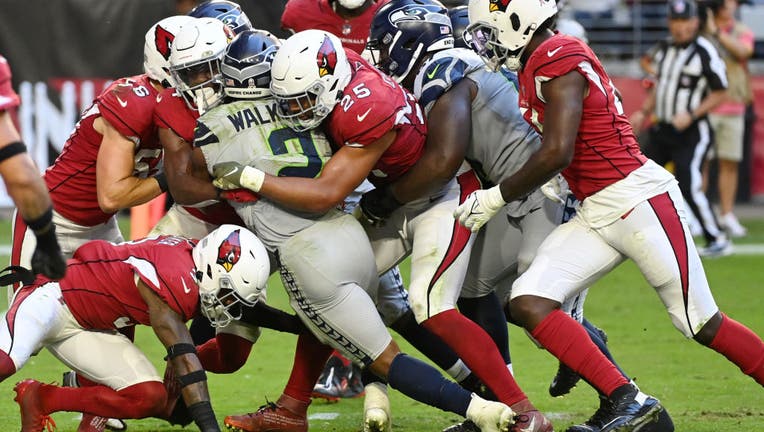 GLENDALE, ARIZONA - NOVEMBER 06: Kenneth Walker III #9 of the Seattle Seahawks pushes forward on a drive during the fourth quarter of the game against the Arizona Cardinals at State Farm Stadium on November 06, 2022 in Glendale, Arizona. (Photo by No

The Seattle Seahawks are moving from cheeky success story to legit contender. After a 31-21 victory over the Arizona Cardinals on Sunday afternoon, the Seahawks are now 6-3 and on a four-game winning streak.

Geno Smith threw for 275 yards and two touchdowns, Ken Walker III rushed for 107 yards and two scores and the Seattle defense held Arizona to just 14 points offensively as both sides of the football continue to perform well.

Smith rebounded from a pick-six from Zaven Collins to author three statement drives in a row to seal away the victory for Seattle.

"We finished the game the way we dream of finishing it, running the football and taking care of the ball and not letting them have it," head coach Pete Carroll said. "Getting after the quarterback, all that stuff that took place in the fourth quarter there. So I really cherish the finish that we put together."

Walker – held to just 31 yards on nine carries in the first half – rushed for 78 yards and two touchdowns in the fourth quarter as the Seahawks wore down the Arizona defense.

Noah Fant had his best day as a Seahawk as well with five catches for 96 yards in the victory. And DK Metcalf and Tyler Lockett each added touchdown receptions to fuel the win for Seattle.

The Seahawks were written off by many before the season as a team tanking in a rebuild. Smith's early success made Seattle the cute, plucky underdog story that was nice, but maybe not too serious a threat. But after four straight wins to grab hold of the NFC West lead, the Seahawks look like a legitimate contender in the NFC. Seattle has scored at least 27 points in five of their last six games. Meanwhile, the defense has clamped down on opponents and become one of the best units in the league over the last four weeks.

"Even when bad things happen, like the interception for us, like, no one's freaking out. There is no freak out. It's just like, oh, well just go back out there and do our job," safety Ryan Neal said.

If you haven't already, it's time to flush away your preseason expectations for the Seahawks. This team isn't what anyone expected. This team is a real player in the playoff race and looks to be getting better and better each week.

Here are the takeaways from the victory over the Cardinals:

– Three statement drives for the Seahawks' offense after pick-six.

After Geno Smith was picked off to give Arizona a 14-10 lead in the third quarter, Smith and the Seahawks' offense delivered an emphatic response.

Seattle marched 70 yards on 13 plays with four third down conversions on their next possession to put the Seahawks back on top.

The big play on the drive was a third-and-12 completion to Tyler Lockett for a first down that turned into a 27-yard gain after an unnecessary roughness penalty on Zaven Collins for his hit on Lockett. Then on third-and-6 from the Arizona 9-yard line, Lockett and Smith connected again for a touchdown that gave Seattle a 17-14 advantage.

Yes, Lockett got away with a shove of Budda Baker on the touchdown that easily could have been an offensive pass interference call, but it went un-flagged by the officials.

But given the pick-six on the previous drive, it was a perfect bounce-back effort from Smith and the offense.

And it didn't stop there.

Seattle converted three more third downs on the next drive with Smith getting involved in the ground game. Smith scrambled for a conversion on third-and-8 and then kept a read-option as well as he added 30 rushing yards on the drive. Ken Walker III then scored on a 1-yard touchdown run to give Seattle a two-score lead, 24-14, with 7:32 left to play.

After Arizona delivered a touchdown drive of their own to make it a one-score game with 3:32 left, the offense closed the door. Noah Fant sprung free for a 51-yard gain up the sideline and stayed in bounds to keep the clock running. Then Ken Walker III finished the job. Runs of 8, 4, 12 and 5 put Walker in the end zone for his second touchdown of the day as the finishing touch to the afternoon.

Those are the types of drives a team needs from its offense when the big moments present themselves. Smith and the Seahawks did it last week against the New York Giants with two fourth quarter touchdown drives that put the game away. They've now delivered in consecutive weeks in those moments.

The turnaround of the Seahawks' defense continued into Arizona on Sunday.

Seattle allowed just 14 points to the Arizona offense, held the unit to only 262 yards of total offense, and forced another critical fumble from Kyler Murray in earning the victory.

"Defense continues to do it, you know. We continue to play good football," Carroll said.

In two games against Arizona this year, the Cardinals' offense only managed 17 total points against Seattle. Six of Arizona's nine points in the Week 6 meeting in Seattle came off a botched punt and fumble by Michael Dickson that became a touchdown for Arizona. On Sunday, Collins' interception for a touchdown of Smith accounted for seven more points for the Cardinals that didn't come from their offense.

"When you continue to build every week the way we've been building, you know, you expect it now. That's what you expect. So when you give up a play here and there you're like, 'come on. That's not us.'" safety Quandre Diggs said.

Diggs pointed to the schematic shift the defense made ahead of the first game with Arizona as being significant. The Seahawks changed the way they asked their defensive linemen to play. Instead of being more passing and playing a read-and-react style, they began to play an attacking, penetrating style that has proven to better suit the personnel they have.

Diggs is far from the only one to point to the shift, but it's clear the group believes its made a big difference.

"I just know it's just kind of switched," Diggs said. "When our big guys were able to go out there and just eat and not worry about two-gapping and they can just be aggressive. I think that just turned them up to another notch. That's what they asked for and that's what I also recommended. So we knew we had to take a next step and. you know, it's going to be on us. If it didn't work, it was going to be on us so we have no more excuses."

The Seahawks defense had been the No. 1 ranked group per Football Outsiders' DVOA metric over the past three weeks. Their performance against the Cardinals was another strong effort that should keep them near the top of the list over the last four games as well.

– Uchenna Nwosu proving to be a brilliant free agent addition.

With two sacks of Kyler Murray on Sunday, Uchenna Nwosu now has a career-high seven sacks on the season.

"He's having a great year. I mean, I don't know who's playing better than he is on the edge. He's everywhere. Running game, passing game, all kinds of big plays," Carroll said.

Nwosu signed a two-year, $20 million deal with Seattle this offseason and has been their most consistent performer in the front seven this season. Even when the Seahawks defense as a whole was struggling through the first five weeks, Nwosu's impact was still very noticeable.

He's been the defensive MVP of the team through the first nine weeks of the season.

"We were banking on him," Carroll said. "That he would be a great guy to add to the program in hopes that we could sell him on what we were doing and see if it would work out."

Carroll said that it wasn't obvious it would fit as well as it has. Nwosu played behind Joey Bosa and Melvin Ingram with the Los Angeles Chargers and had a more limited role with them. It was a bit of a projection for Seattle to guess how he'd fit in as an every down player with the Seahawks, but they believed it was something he was capable of handling.

"It was a little bit of a projection for us, because we were going to play him differently than he played even in a very similar scheme," Carroll said. "And so we loved the kid and his background and his makeup and his style of play and his toughness, smarts and all of that. We loved all that. But we didn't know how he would adapt to the stuff, the freedom that we'd give him. And he's doing great."

Nwosu's two sacks were a part of four for Seattle overall against Arizona. Bruce Irvin and Shelby Harris each got one as well. Add in the Week 6 game and the Seahawks managed to sack Murray 10 times in two games this season.

"We got after the quarterback pretty well today," Carroll said. "He's so hard to get and all of their yards was the quarterback running today and he's he's great at it. So we're fortunate when we can get him down."