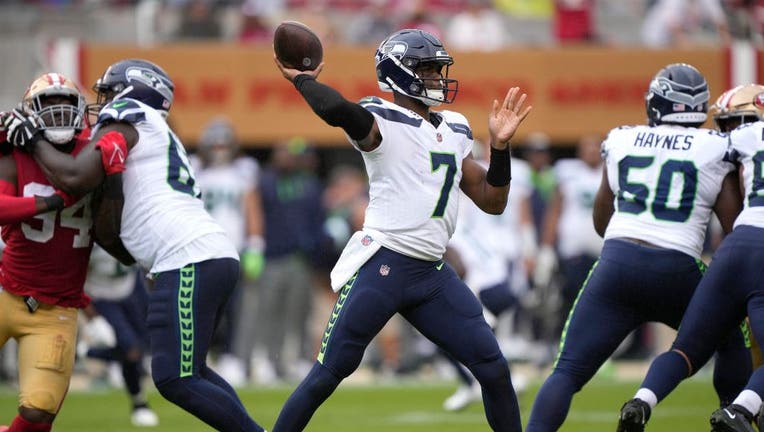 SANTA CLARA, CALIFORNIA - SEPTEMBER 18: Geno Smith #7 of the Seattle Seahawks passes the ball against the San Francisco 49ers during the fourth quarter at Levi's Stadium on September 18, 2022 in Santa Clara, California. (Photo by Thearon W. Henderson

The Seattle Seahawks were thoroughly dominated by the San Francisco 49ers in a 27-7 loss in the Bay Area on Sunday afternoon.

Seattle saw its offense fail to accomplish much of anything, a run defense repeatedly gashed by Jeff Wilson Jr. and Deebo Samuel, and a dubious play-call backfire in brutal fashion. There are several aspects of Sunday's loss that should be concerning for the future ahead for the Seahawks.

Outside of Tyler Lockett posting a 100-yard game and Tariq Woolen blocking a field goal try to give Seattle their only points of the game, there really wasn't much positive in the loss for the Seahawks.

"We didn't do anything like we wanted to do today," head coach Pete Carroll said.

Here are the takeaways from Sunday's loss to the 49ers:

The only points of the game for Seattle came when cornerback Michael Jackson returned a blocked Robbie Gould field goal by Tariq Woolen 86 yards for a touchdown.

The Seattle offense produced zero points, only 216 yards of total offense, were just 2-of-7 on third down and faced a 38:20-21:40 deficit in time of possession.

"We have to do everything better," Carroll said. "We have to run the ball with some consistency. We actually protected pretty well early in the game for the first three quarters, I guess. But we just got to make more things happen. We have to fit it off what we do with the running game and make the passing game come to life off the play-(action) passes and stuff that really didn't even show today. We ran the ball for nothing. We gotta execute better."

The reason it's concerning beyond just the result of Sunday's game is because this is how Seattle lost games last year. The Seahawks had just four games all of last year where they ran at least 60 plays offensively. They had two games where they ran fewer than 50 plays in a game, a pair of losses to the Arizona Cardinals at home and the Washington Commanders on the road.

"We've had opportunities in the past where we've showcased that we can be a great offense," quarterback Geno Smith said. "I think it just takes for us every man just diving into the work and really being hard on himself when he watches the film and saying what can I do better? And then obviously going back to work and getting back to practice and cleaning up the minor mistakes that we had today. And once we get another opportunity to go play, we gotta go make it happen."

The offense has now failed to score a single point in six straight quarters of play.

On a second-and-5 from the 49ers’ 8-yard line with just over four minutes left to play in the first half, Carroll elected to go to his bag of tricks as Seattle called a halfback pass for running back DeeJay Dallas.

With all four running backs on the field out of a full house backfield formation, Dallas took a handoff after a direct snap to Ken Walker III and attempted to throw for DK Metcalf in the end zone. The pass was undercut and picked off by Charvarius Ward instead.

"I wish I'd have called timeout. I should have," Carroll said. "Because it was a really cool play to call and to give a shot to, but it asked a lot in that situation. I just wish I would have got us out of it."

Dallas was a quarterback in middle school and into high school. Throwing a football isn’t a completely foreign concept to him. The creativity of the play-call shouldn’t be completely panned just because it didn’t work.

The issue with the call was when Seattle elected to go to it. It was the first trip into the red zone of the day for the Seahawks’ offense. The Seahawks were only in a 13-0 hole at the time and any points scored on the drive keeps Seattle within reasonable reach of the opponent.

Instead, it resulted in at least a 10-point swing in San Francisco’s favor as the 49ers marched down field for a touchdown on a 1-yard Kyle Juszczyk run to make it a 20-0 game.

Cornerback Tariq Woolen raced arount the left end of the 49ers' offensive line and tight end Ross Dwelley to get a clean block of Robbie Gould's 20-yard field goal try, The loose ball deflected cleanly to Michael Jackson, who raced 86 yards for a touchdown to get Seattle back into the game.

With Woolen's extreme athleticism at 6-foot-4 and a sub-4.3 40-yard dash time, the Seahawks felt there would be a good chance Woolen could block a kick this season. Dwelley provided little resistance on the edge as Woolen got a clean look into the backfield to block the try.

It's the first blocked kick returned for a touchdown by Seattle since Richard Sherman returned a blocked kick from David Akers 90 yards for a score against the 49ers in Week 16 of the 2012 season. Red Bryant earned the block on that particular play.

Woolen has started the first two games at right cornerback for Seattle and has held up very nicely on the outside. He had a pair of pass interference penalties last week against the Denver Broncos, but hasn't allowed hardly anything in the passing game his direction.

The blocked field goal was the highlight of the game for Seattle and an exclamation point on a strong two games for the rookie standout.

Maybe the most glaring area of defensive concern through two weeks has been stopping the opposing run game.

The 49ers rushed for 189 yards on the ground with Wilson going for 84 yards on 18 carries and Samuel adding 53 yards on four carries. That follows a game against the Broncos last week when Melvin Gordon and Javonte Williams combined for over five yards per carry in rushing for 101 yards on 19 carries.

Missed tackles were an issue at times throughout the game. For instance, on Samuel's 51-yard run in the second quarter, Darrell Taylor missed a tackle on Samuel in the backfield before he got free for the big gain.

"We got to do better. We need more guys around the ball so guys don't get stuck in the one-on-ones so much. Just gotta do better," Carroll said.

Missed tackles were an issue in the preseason as well, but that was mostly from players who aren't playing regularly now or aren't even a part of the roster. To have those issues surface again with the starters is something to at least keep an eye on.

The issues in the run game have particularly been noticeable on the perimeter as teams have run to the edges against an undersized Taylor at times.

The Seahawks are adjusting to a new defensive scheme with a 3-4 front being the base look. Some growing pains are to be expected of the switch to new principles, but it's an area the Seahawks have to improve in.