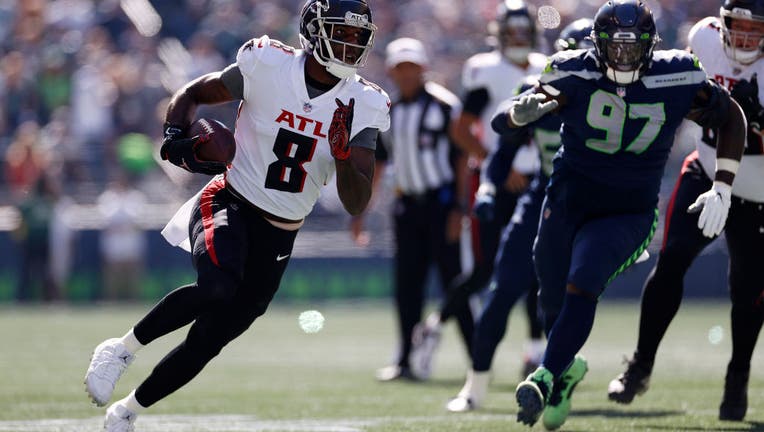 SEATTLE, WASHINGTON - SEPTEMBER 25: Kyle Pitts #8 of the Atlanta Falcons runs with the ball against the Seattle Seahawks during the first quarter at Lumen Field on September 25, 2022 in Seattle, Washington. (Photo by Steph Chambers/Getty Images)

SEATTLE - The Seattle Seahawks had several opportunities to win Sunday's game against the Atlanta Falcons only to see costly errors in the fourth quarter sink them in a 27-23 loss.

A pair of holding penalties from left guard Damien Lewis imploded a pair of promising offensive possessions as Seattle tried to find the winning score. A gift of a fumble from Marcus Mariota on an exchange with running back Tyler Allgeier gave the Seahawks time for a final drive to take the win. Instead, Lewis' holding penalty backed Seattle up and a desperation fourth-and-18 heave from Geno Smith was intercepted as the Seahawks fall to 1-2.

Seattle's offense played quite well generally in gaining over 400 yards of offense on the day. But the unit mustered only three points in the second half as the Seahawks' defense continued to have major problems stopping their opponents.

Here are the takeaways from the 27-23 loss to the Falcons:

The Seahawks' defense has really struggled through most of the first three weeks of the season and Sunday's loss to Atlanta was no exception.

The Falcons had seven plays of at least 20 yards in the game. Atlanta rushed for 179 yards behind 141 yards on 17 carries with a touchdown from Cordarelle Patterson. The Falcons faced just seven third downs in the game as they were able to march down the field without much resistance at times.

Seattle forced just one three-and-out – their first such stop of the season through three games – and allowed at least three first downs on six of the Falcons' seven full drives during the game. That excludes Tariq Woolen's interception on the last play of the first half and the final drive of the game when Atlanta ran out the clock.

"We have to clean things up and progress faster. There's no time. We have to get better now," head coach Pete Carroll said of the defense.

The Seahawks have really struggled with runs attacking the edges of their defensive front. Opponents have been running off-tackle runs at Seattle's defense and finding soft spots in the team's run fits.

"We have to fit things up more accurately, more consistently," Carroll said. "We just have to clean up the way it's happening there. The edge is part of outside stuff and everything up off tackle as well, and we're not hitting it like we have planned to. We have to clean that stuff up. It's the guys up front. It's the linebackers and the (defensive backs) all fitting together. We can't give up the space that we're giving up. It looks like it's too easy for them. It’s something that we've been focusing on, but we haven't changed it yet. We need to get that done. "

Patterson had 107 of his yards rushing in the second half. A 40-yard carry in the fourth quarter came as part of a quick five-play, 75-yard scoring drive that took just two minutes and 36 seconds that gave the Falcons the lead and their winning margin.

"It's right there. That's the NFL. It's a game of inches. It's a game of like one play can change the whole dynamic of the game, one inch can change the whole dynamic of a play. We got to do the little things right and longer than other teams. It literally is that. Because one inch outside your gap and the ball can hit for 40."

Atlanta's seven explosive plays against the Seahawks were:

Pitts also had a 19-yard catch and Patterson had a pair of 18-yard runs as well.

Mariota finished with 229 yards passing with a touchdown and Woolen's interception.

Free safety Quandre Diggs said the defense needs to own the fact that they aren't very good at the moment.

"These guys played a hell of a game on offense today and we stunk it up on defense. I mean, I know people got mad at me for my comments last week, but you don't want to hear the truth, then don't ask me questions. You feel me? I just, I tell the truth. My teammates understand that so they don't take it the wrong way. We just got to be better.

"What I'm saying is we're obviously not that good to take days off. You know what I mean? Like real people that know football know exactly what I mean. So if we were the team we were two years ago, we could take days off. We were 12-4, you feel me? We not there yet. So at the end of the day, I'm not saying we can't be that, but at the end of the day we got to work to get to that point."

– Geno Smith is not the problem, is playing well.

Geno Smith is not the reason the Seahawks are off to a 1-2 start. So those beating the drum for a quarterback change likely aren't going to get their wish anytime soon.

While the offense did scuffle their way through last week's game against the San Francisco 49ers, Smith has been poised and competent through his first three starts this season.

"I thought he played really, really well," Carroll said of Smith. "That's exactly what he has been looking like. That's exactly what I'm telling you. You can see him. He can do things right. He understands what's going on. He is in command of it. He has the arm to throw all of the throws that we're asking him to do. He is really poised about it. That's a heck of a football game today he threw. He is doing his part.

The offense had gone scoreless for six quarters dating back to halftime of the season opener against the Denver Broncos. But against the Falcons, the Seahawks scored on five of their first six drives of the game. Four of the drives had at least nine plays run with Seattle racking up 19 total first downs over the span.

"The biggest thing for us is just being able to finish."

The offense did leave points on the board. Three drives into the Atlanta red zone ended in field goals instead of touchdowns. And the final two drives of the game – when Seattle needed a touchdown to win – were both derailed by holding penalties. But when it comes to a "Blame Pie" for Seattle on Sunday, it's the defense that is most at fault for the defeat.

Pete Carroll said this week he intended to take some of the leash off of the team's offense because of the faith he's developed through the play of rookie tackles Charles Cross and Abe Lucas.

With that in mind, Seattle's offense did post a solid effort against the Falcons. The Seahawks had just three games all of last season where they had over 400 yards of offense and Seattle finished with 420 yards against Atlanta.

But two holding penalties on Damien Lewis derailed the final two possessions of the game for Seattle. The first came with the Seahawks at midfield three minutes into the fourth quarter. That put Seattle in a first-and-20 situation they were unable to dig out of and led to a punt.

Then after a fumbled exchange between Mariota and Allgeier with 5:16 left, Seattle began to march toward a game-winning score. A fourth-and-1 conversion from Rashaad Penny kept the drive alive and a 20-yard strike from Smith to Lockett moved Seattle to the Falcons 30-yard line. A screen pass to Penny moved the Seahawks to the Atlanta 9-yard line only for Lewis' second holding penalty to set Seattle back again. Smith was then sacked on third-and-8 and his fourth down throw was picked off by Richie Grant.

"I didn't see the holding penalty on the big play," Carroll said. "We were down on the 9-yard line, whatever. Just everything is going just like it's supposed to, and they saw something on us."

After taking 10 penalties against the 49ers last week, the Seahawks were cleaner this weekend with just six against the Falcons. However, the two on Lewis were critical blunders that helped to sink Seattle's chances.