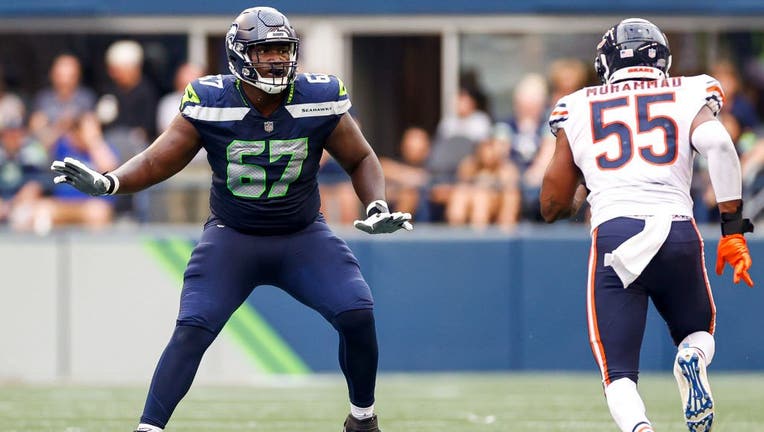 SEATTLE, WASHINGTON - AUGUST 18: Charles Cross #67 of the Seattle Seahawks looks to block Al-Quadin Muhammad #55 of the Chicago Bears during the preseason game at Lumen Field on August 18, 2022 in Seattle, Washington. (Photo by Steph Chambers/Getty I

It wasn't so much that the Seahawks were blown out 27-11 by the Bears in their only home preseason game of the year, it was the way in which it all went down. Very little went right for the Seahawks across the board.

Darwin Thompson scored a late touchdown in garbage time and had the highlight of the night with a hurdle of a Bears defender in the third quarter.

But the majority of the effort left head coach Pete Carroll miffed after the performance.

"You can’t play football like that. It’s bad," Carroll said.

There was positive news on Lewis' injury outlook after the game. Rookie cornerback Coby Bryant made a strong tackle and a pair of pass breakups, and Geno Smith was solid in his efforts at quarterback as well.

But beyond that, Carroll didn't have much positive to say about the outing.

"That's a big-time lesson for us there," Carroll said. "It's preseason, and we have to make some big evaluations, and everybody needs to be accountable. Everybody needs to get their act right. We can't give up 13 different things and might have been 15 or 16 different things we did in the game, to give stuff to the other team. And when you do that, you can't win. So, I would try to make the impression on them that everybody is responsible for taking care of their own business here. And we have to all own that and then fix that. And don't let it be you."

Here's the takeaways from the loss to the Bears:

Smith finished the night 10-of-18 for 112 yards with no touchdowns and no interceptions. However, Freddie Swain, Dareke Young and Bo Melton all dropped passes that would have buoyed Smith's passing totals. All three passes were well thrown balls from Smith that were certainly catchable from the intended targets.

"He's running the show well," Carroll said of Smith. "He's doing OK. Got out of the pocket when he needed to, and threw a couple really good balls that could have been converted. We have to come through for him. Our receivers have to make the plays for him."

Smith bruised his knee and had an ice wrap on his right leg after coming out of the locker room after halftime. Jacob Eason played the entire second half at quarterback for Seattle.

Both Carroll and Smith said he was fine and it wouldn't be an issue moving forward.

While Smith played well, his performance didn't do enough to put the quarterback competition to bed. It checked a lot of boxes but wasn't a dynamic or potent offensive effort to seize command of the job.

Carroll indicated they still have a desire to see more from Lock as they head into the final week of the preseason. However, Carroll said that Lock was struggling with his case of COVID-19.

"He's really sick. He's sick. I think it was this morning or something I talked to him. It hit him pretty hard," Carroll said.

"I'm still curious to see how he plays with us. Yeah, I am. And he's done enough good things. He's got some real stuff to him and some real exciting ability and play-making stuff that you all see when he does get his chances eventually. And just disappointed we didn't get to know some more about it tonight.

Much the same as the growing pains of Coby Bryant and Tariq Woolen at cornerback last week, left tackle Charles Cross had some rookie mistakes against the Bears.

Cross had five penalties in total against Chicago with a holding penalty and four false starts. After a really strong debut in Pittsburgh, Cross' showing against the Bears was a bit of a stumble.

"We already talked through it," Carroll said of his conversations with Cross. "And each one of them is a different situation, different plays. Anyway, every one of them had its own little storyline to it. And they're not all the same.

"But him being comfortable, assessing the cadence adjustment and the things that we have to do, it's just experience. And so this is not going to be something that bothers him forever. We've just got to get it cleaned up and settle him in and make sure each situation, that he makes the right assessment does the right job. It's like the tackling thing."

It appears the Seahawks dodged a bullet with Damien Lewis' ankle injury. Here's our story on Lewis have only a lateral ankle sprain after X-rays were negative.

Seattle Seahawks left guard Damien Lewis appears to have avoided serious injury as X-rays on his injured right ankle came back negative following his exit in the second quarter of Thursday night's game against the Chicago Bears.

After last Saturday's game against the Pittsburgh Steelers, Carroll said their tackling had been a problem.

"We tackled really poorly tonight," he said. "It's the first game and that's what it looked like so we know we've got to focus because all of the things that happened basically happened because our tackling was poor."

The "first game" no longer applied for Thursday's game against the Bears. Marquise Blair had nearly half-a-dozen missed tackles himself as tackling across the board remained problematic.

"I'm going to check on the tacklers. I'm going to check on the tacklers, the guys missing. That's the important thing. I'm going to see who is missing tackles and fix that problem," Carroll said. "I don't think it's like an epidemic kind of thing. It looked like that last week a little bit. But we’ve got to clean some stuff up with some guys. If they don't get it right, then they won't be able to be here. We'll get guys that can."

Blair's missed tackles were the most obvious of the group cause it happened repeatedly. A press box unofficial count had Blair at five missed tackles on the night. He also picked up a personal foul for unnecessary roughness as well.

A few of the cornerbacks did have some notable tackles. MIchael Jackson, starting at left cornerback against Chicago, had a pair of strong tackles in run support. Rookies Tariq Woolen and Coby Bryant were both improved from their efforts last week as well. Joel Iyiegbuniwe delivered a terrific tackle on the goal line on fourth down, too.

But generally, it was a problem area again.

The Seahawks had a disastrous night on special teams.

Jason Myers missed a 47-yard field goal try. Velus Jones Jr. broke free on a 48-yard punt return. Justin Coleman was unable to keep a fantastic punt from Michael Dickson from going into the end zone for a touchback, and Cade Johnson muffed a punt that turned into an Elijah Hicks touchdown late in the first half.

Seattle then had holding penalties on their first two punt return chances in the second half as well and Nsimba Webster added a 58-yard kickoff return early in the fourth quarter.

"Our leverage on the return game was really bad on special teams for two weeks in a row. I don't remember us ever looking like that," Carroll said.

The also took advantage of a muffed punt for a recovery late in the fourth quarter and converted an onside kick after a failed fielding of the ball by a Bears returner. But the miscues in the return game over the first two weeks of the preseason has Carroll eager to make changes to fix it, if necessary.

"We have a bunch of guys out there all trying to go make the tackle as opposed to working together," Carroll said of the coverage issues. "And it's a young bunch of guys. I'm just not used to seeing that happen in our games. It's unfamiliar. Sometimes the guys, they have to do it right. And we're spending time on it. We'll spend more time on it. We're not going to scapegoat on who can't make a play or whatever. We have to post up right. That's fundamental stuff. We're not done with that yet."