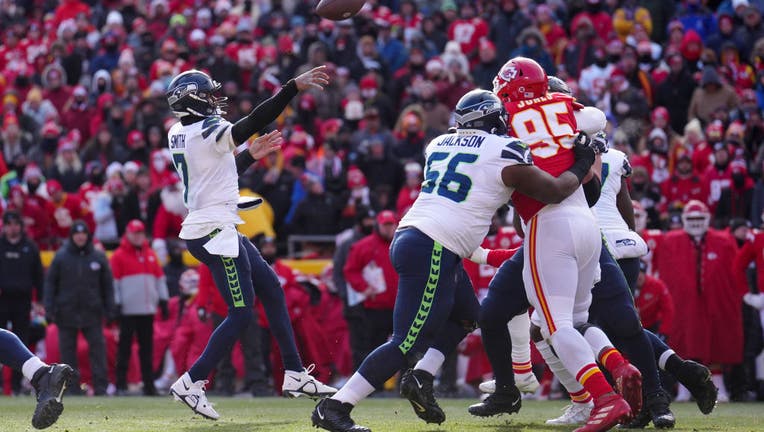 KANSAS CITY, MISSOURI - DECEMBER 24: Geno Smith #7 of the Seattle Seahawks attempts a pass during the second quarter against the Kansas City Chiefs at Arrowhead Stadium on December 24, 2022 in Kansas City, Missouri. (Photo by Jason Hanna/Getty Images

The Seattle Seahawks offense took too long to thaw out in frigid Kansas City on Saturday as they lost their third straight game 24-10 to the Chiefs.

Seattle was just 2-of-14 on third down and 3-of-6 on fourth down as the Seahawks were just unable to deliver the key plays they needed. The Seahawks out-gained Kansas City 333-297, ran 22 more offensive plays, saw Ken Walker III rush for 107 yards, and it still wasn't enough. Many of those yards and the only touchdown of the day – a 6-yard pass from Geno Smith to Noah Fant – came with the outcome already well in hand for the Chiefs.

"We have to be more efficient. We weren't efficient on third down," head coach Pete Carroll said. "And we need to be more consistent on offense. The last couple of weeks the defense is really starting to step it up and that's what we need. So It's everything. We need to do a little bit better everywhere."

The defense played its best game in weeks in keeping the high-powered Chiefs offense mostly in check. The four three-and-outs forced by Seattle were the most the Chiefs have had in a single game this season. Walker's 100-yard day was the most output from the Seahawks' rushing attack since early November as well.

However, the Seahawks just can't put all aspects of a game together at the moment. It's their fifth loss in their last six games played. And the one game they won, a 27-23 victory over the Los Angeles Rams, required a late touchdown drive on the last possession of the game to escape with a victory.

Losing a road game to the Chiefs was not going to be a surprise. They're one of the best teams in the AFC. However, home losses to the Las Vegas Raiders and Carolina Panthers have made a road loss to the Chiefs far more significant for Seattle's dwindling playoff chances. The Seahawks will likely need to win each of their final two games at home against the New York Jets and Rams to have a chance to make the postseason.

After a 6-3 start to the year, being home for the postseason would be a sour end to the season.

Here are the takeaways from the loss to the Chiefs:

– Resurgent rushing attack and defensive performances were encouraging, but too little, too late?

If the Seahawks had gotten rushing performances like this or a defensive performance like this through most of the last two months, they wouldn't be a 7-8 football team.

Walker had 91 yards on 17 carries in the second half to help spark a stagnant offensive attack.

"A lot of times I was trying to make something happen but I really just needed to go straight and be decisive and things (would) start to open up," Walker said.

Seattle had been held to less than 100 yards rushing as a team in five straight games before Saturday. The Seahawks had averaged just 62 rushing yards a game over that span heading into the matchup in Kansas City.

After rushing for 213 yards against the Los Angeles Chargers on Oct. 23, the rushing attack faltered. A big second half showing against the Arizona Cardinals on Nov. 6 was the last sign of a life from the ground game until Sunday's effort by Walker.

"He's such a good player and our guys up front blocked their tails off today. And you can see how we can run the football," Carroll said.

Similarly for Seattle's defense, the group had been gashed by opposing rushing attacks over that span. The Seahawks hadn't held a team under 160 yards rushing since the win over Arizona. The Chiefs managed just 77 rushing yards on Saturday with Isiah Pacheco leading the way with 58 yards on 14 carries.

"That's winning football when you can hold a team like that to 3 of 11," safety Quandre Diggs said. "I think that's big time. I think we had a fourth down stop too. So that was pretty good.

If either of those aspects have been the case against the Raiders or Panthers, the Seahawks would likely already have their playoff plans in place.

The second half performance by Walker and the strong play by the defense allowed Seattle hope they could mount a rally. However, two second half drives ended on failed fourth down tries inside the Chiefs' 40-yard line. A first quarter drive also ended in Kansas City territory when Smith's fourth down pass was batted down at the line of scrimmage.

"It's in respect to them, the offense that they have and the players that they have," Carroll said of the choices to go for it on fourth downs. "I wasn't sure that we would be able to hold them down as well as we did. Our defense got better in the second half and just kept playing better.

"That made a big difference and our third down play was really good on defense today against the best third down team in the NFL Knowing what they're capable of, that's really what dictated the decisions. I'm not saying it's right, it's just the way I went for it."

The Seahawks will need both aspects to continue to perform if they want to run the table and give themselves a reasonable chance at a playoff berth. It's a big positive that the team made a stride in these areas this week, but coming off five losses in six games, it may not be soon enough.

– Geno Smith not quite as sharp as season peak in recent weeks.

With the struggles of the rushing game and defense, the Seahawks have needed Geno Smith to carry them through much of the season. During the first half of the year, Smith was superb and the biggest reason Seattle got out to a 6-3 record to being the year.

Smith has been slightly less sharp over the last few weeks compared to his incredibly strong play earlier this year. Smith completed 25-of-40 passes for 215 yards with a touchdown and an interception in the loss to Kansas City on Saturday. Without Tyler Lockett in the lineup due to a broken finger, it's not a shock that Seattle's passing attack was stunted.

With temperatures in the teens and a wind chill near zero degrees in Kansas City, conditions were difficult for both quarterbacks. Patrick Mahomes finished with just 224 yards passing on the day as well, but his two touchdown passes and no interceptions were the difference.

"I thought Geno was fine. He played good football," Carroll said. I wish he would have taken off and run on the third down play. I mean, he saw a little opening and threw it but man he had 25-30 yards there up the middle. It would have been a huge play."

Smith had a wide opening to run on a third-and-6 where he tried to fit a ball in to Marquise Goodwin over the middle instead. The pass fell incomplete and Seattle had to punt. In addition to the two drives that stopped on failed fourth downs, Smith was intercepted by Juan Thornhill on a pass over the head of Marquise Goodwin in the end zone from the outskirts of the Chiefs' red zone.

"Bad pass from me. Didn't put in the right spot. ... That's completely on me, not on Marquise," Smith said after the game.

Added Carroll: "He went aggressive on the interception. He went for it. Everybody there was counting on throwing that ball. That was what we were looking for. But It was the one that we wanted to take a shot at."

Carroll said the length third downs in the first half were a big part of the struggles to get the offense going.

"But we needed to help him out," Carroll said. "Really the third downs in the first half, they were too long. Elevens and 12s and 13s. That's why we needed to mix the running game in there so that we could get into normal third down situations and the third down day was not a good day."

Smith is not playing "bad." He's not playing quite as well as he was during the strong stretch of play earlier this year. Since the win over Arizona in November, Seattle's offense has become less consistent. It's not a big shift, but it's enough to sink the team when the defense is struggling as well. Seattle has scored just one touchdown in each of the last two weeks and both have come late in the fourth quarter with the game out of reach.

"We've had our really good times. We've had times where we just couldn't get it done," Smith said. "But you know, I'm always very optimistic about the guys were playing with and I really believe in these guys. I know that we can get these things done, you know, if we just do things right. And we're really going to try and find ways to correct it because we obviously have the guys. We have the guys and we know what to do. We're just not getting it done right now, but we'll turn it around."