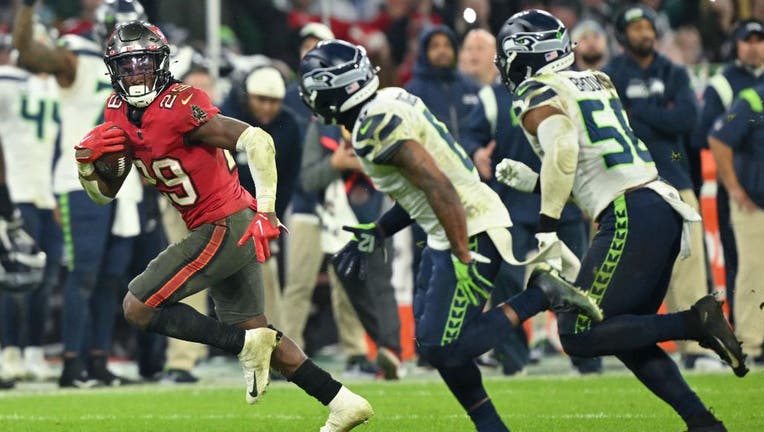 The Seattle Seahawks suffered their first setback in a month, losing to the Tampa Bay Buccaneers 21-16 in Munich, Germany on Sunday.

Seattle got off to a sluggish start and were unable to dig themselves out of a 21-3 deficit in the fourth quarter. The Buccaneers rushed for a season-high 161 yards against Seattle and Tom Brady threw for 258 yards and a pair of touchdowns to beat the Seahawks.

"They played a really good football game," head coach Pete Carroll said. "Tampa Bay did what they wanted to do, particularly early in the game they were able to keep us off balance. We have not been like that for a while."

The Buccaneers shut down Ken Walker III and Seattle's rushing attack. The Seahawks managed just 39 rushing yards in the game with Walker limited to 17 yards on 10 carries. Seattle struggled to adapt to the lack of ground game success early as they were limited to 57 yards of total offense and just 20 plays run in the first half, which was half of the total that the Buccaneers ran (40).

Geno Smith completed 23 of 33 passes for 275 yards with two touchdowns as his run of strong play continues. However, a lost fumble inside the Tampa 10-yard line late in the third quarter was a critical error for Seattle as they attempted to get back into the contest.

Even with the loss, the Seahawks are 6-4 as they head into their bye week and will remain atop the NFC West when they return to face the Las Vegas Raiders in two weeks But the errors made in the loss to the Buccaneers will be something to file away as the season marches forward.

Here are the takeaways from the loss to the Buccaneers in Deutschland:

– Running game and third downs were the difference in the game.

The Seahawks rushed for 39 yards on 14 carries and converted just 1-of-9 chances on third down against Tampa Bay.

The Buccaneers rushed for 161 yards and converted on 10-of-15 third down chances against Seattle.

Sometimes football can be pretty simple.

"I don't think we converted a third down in the first half and didn't run the ball at all," Carroll said.

The Seahawks had made a ton of progress defensively since their Week 5 loss to the New Orleans Saints, but Sunday’s game was a step backward.

Tampa Bay entered the contest as the worst rushing team in the NFL. At just 60.7 yards rushing per game, the Buccaneers were on pace to be the worst rushing offense since the AFL-NFL merger in 1970. The 2000 San Diego Chargers averaged just 66.4 yards rushing per game that season. But against the Seahawks, the Buccaneers found their ground game behind rookie Rachaad White.

White rushed for a career-high 101 yards on 22 carries in his most extensive action in Tampa’s backfield this season. Leonard Fournette added 57 yards and a touchdown on 14 carries before leaving with a hip injury as well.

"They ran the ball more than they have in the past," safety Quandre Diggs said. "It kind of gets you out of whack when you prepare for them to throw the ball a little bit more. They ran it really well today, so I don't blame them for continuing to stick with the run game. We've just got to play our assignments better."

Seattle had been much-improved against opposing rushing attacks over the last four weeks since allowing 235 yards in the loss to the Saints.

"I was really disappointed," Carroll said. "They have not been running the ball very consistently, so coming into the game, we were hoping we could just keep it under wraps and be able to deploy for the throwing game. They did better than we thought they would. They finished running the ball in the fourth quarter, which kills me. That last drive, to not get the ball back and get our chance again, that's just not the way we expect to play or the way we ever want to put it out there. So that's unfortunate."

Despite having five third down chances of three yards or fewer, Seattle converted just one on Walker's five-yard carry. They also forced a third-and-8, third-and-10, and a third-and-22 that went unconverted. A separate third-and-5 became a third-and-10 after a delay of game as well.

For the Buccaneers, two of their five failed third down chances were actually kneel downs by Brady at the end of each half. So Tampa Bay was effectively 10-of-13 on third down in the game. The failed attempts came on third-and-7, third-and-10, and third-and-14. Seven of Tampa's conversion came with three yards to gain or less as the Buccaneers stayed ahead of the chains.

"They threw and caught it in spectacular fashion," Carroll said of the Buccaneers. "Their guys making the plays, they've got great receivers, and they showed it tonight. They came through with guys hanging all over them with some terrific throws, and they kept converting, and that was the difference in the game."

Rookie cornerback Tariq Woolen earned his fifth interception of the year on a throw from an unlikely passer.

Woolen intercepted running back Leonard Fournette on a pass that was intended for Tom Brady.

Well, the Buccaneers ran a direct snap to Fournette in the Wildcat earlier in the drive with Brady split out wide to Woolen’s side. Woolen didn’t attempt to cover Brady as he cheated down the line of scrimmage on the run play from Fournette.

The Buccaneers seemingly saw that and decided to test Woolen on another snap out of the Wildcat. Fournette took the snap with Brady again split out wide left as Brady took off up field and Fournette rolled right. Fournette turned and threw to Brady, but Woolen stayed with the future Hall of Famer. Brady slipped and Woolen picked off the pass for Seattle.

It was a significant momentum shift for the Seahawks that allowed them to stay in the contest. The interception came at the Seattle 6-yard line as Tampa Bay was driving for another score while leading 14-3.

Smith was 17-of-23 for 206 yards with two touchdowns in the second half as the Seahawks cut the Tampa lead from 21-3 to 21-16 with less than four minutes to play. However, Smith's lost fumble on the drive following Woolen's interception keep Seattle's offense from pulling off the rally.

After marching 71 yards on 10 plays after the interception, Smith was stripped by Devin White on a snap from the Buccaneers' 9-yard line that kept points off the board for Seattle. The Seahawks ran out of an empty formation with Smith trying to run the football only to have White close down and knock the ball free.

"It was a QB draw and tried to run it. Didn't work," Smith said. "Sometimes it happens like that, but you've got to protect the football most of all, and that didn't happen right there. I got the ball stripped from me, and I can't have that. I can't have that happen. I hurt the team."

Earlier this season, Smith walked into the end zone on a draw play out of an empty formation in the team's 44-41 victory over the Detroit Lions. That play came from the Detroit 8-yard line. This one came from the 9-yard line. The Buccaneers just weren't fooled and the negative play compounded with Smith's fumble.

"Huge turnaround. We really were with another great opportunity right there, and those are crushers," Carroll said.

Otherwise, Smith was, again, quite good for Seattle. He completed two fourth downs with big-time throws on a touchdown drive that cut the lead to five. A 10-yard completion to Tyler Lockett came on fourth-and-3 with Smith needing to throw quick with pressure bearing down on him. Then a 19-yard touchdown strike to Marquise Goodwin on fourth-and-1 that had a small window to fit into to find Goodwin for the score.

"I think the whole second half he was really on it, and he did a great job," Carroll said of Smith. "We just went right back to really relying on him in the throwing game and didn't try to force the run. … I thought Geno managed that really well and bounced us right back into the ball game."