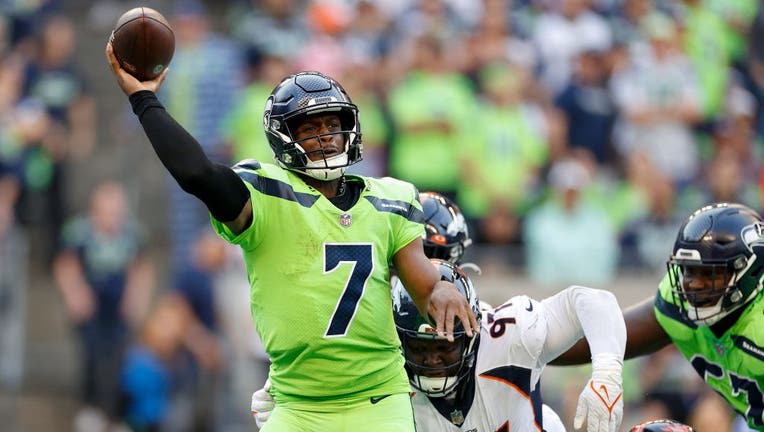 SEATTLE, WASHINGTON - SEPTEMBER 12: Geno Smith #7 of the Seattle Seahawks passes under presser from D.J. Jones #97 of the Denver Broncos at Lumen Field on September 12, 2022 in Seattle, Washington. (Photo by Steph Chambers/Getty Images)

SEATTLE - After being written off for months following the trade of Russell Wilson to the Denver Broncos, the Seattle Seahawks rose to the occasion to defeat their former quarterback and spoil his Denver debut in his return to the Pacific Northwest on Monday night.

Maybe Monday night's win is the pinnacle of the 2022 season for the Seahawks. Maybe it never gets any better than the 17-16 victory to kick off the season against the Broncos and exact some revenge on a quarterback that leveraged his way out of town this spring. Maybe it spirals to the expectation levels many outside of Seattle have the rest of the fall.

But that won't take away from the jubilation the Seahawks felt in moving to 1-0 on the season, knocking off the Broncos and taking the solo lead in the NFC West after the first week of the campaign.

"The way we coach, the expectations that we have, the belief that we can win on Monday night, regardless of what everybody else thought. You know, prime-time again, you know. That's validation in those regards," head coach Pete Carroll said.

The Seahawks have said repeatedly they believe this team can do some big things. There are 16 more games to go and one victory alone won't change the narrative about the post-Wilson Seahawks. But Monday night's victory showed Seattle may not be as feeble as anticipated.

"It's one win," quarterback Geno Smith said. "We can celebrate it tonight. We've got a short week. We've got to get ready for a division opponent in San Fran. We're happy. We feel like we can win a lot of games if we play like that."

Here are the takeaways from Seattle's victory over the Broncos:

Geno Smith rises to the occasion as Seahawks starter

In his first start as the No. 1 quarterback of an NFL team in seven years, Geno Smith posted one of the best starts of his career.

Smith opened the game completing 17-of-18 passes for 164 yards and two touchdowns in the first half as the Seahawks built a 17-13 halftime advantage. Smith improvised when necessary, was accurate with his passes, and used his legs in a few key spots to bolster a fresh-look Seattle offense.

"Geno played tonight like he's been playing the whole time we've been practicing," Carroll said. "That's what he's been looking like. He didn't look any different than what he looks like in practice. And so that's why we had the belief in him and that's why he was able to win the job and go out there on Monday Night Football and win a football game."

Smith said he didn't celebrate being named the starter over Drew Lock two weeks ago. Despite the long road back into a starting role after losing his job to a broken jaw with the New York Jets in 2015, Smith said the focus was only going to be on winning.

But Smith did give a nod to people that doubted his ability in earning the job in Seattle.

"They wrote me off. I ain’t write back though," Smith said on the field after the game to ESPN.

Geno Smith not celebrating being a starter again, focused on winning for Seahawks

It's been seven years since Geno Smith was a starting quarterback in the NFL. But winning the starting job for the Seattle Seahawks isn't a finish line for Smith.

The offense wasn't able to continue the success into the second half. DK Metcalf lost a fumble and Seattle was held to just 34 yards of offense after the break.

"We've got to finish games better," Smith said. "It's great to get a win. Our defense went out there and did what they had to do, but we could have put up more points and given ourselves even more cushion to have a better shot in that game."

Smith finished the game completing 23-of-28 passes for 195 yards and two touchdowns with a passer rating of 119.5, which ranks as the fifth best rating of his career.

"Geno's a special dude, man," receiver Tyler Lockett said. "The biggest thing that people don't understand is he got his chance. Not so many people get a chance after not playing for a couple years. He got his chance, he ran with it. He played one heck of a game, man."

This isn't to say that Seattle's offense is "better" than it was with Russell Wilson last year, but it definitely had more elements folded into the game plan.

Smith lined up under center, in the shotgun and in the pistol formation throughout the game. Seattle utilized an array of motions and boot leg action to get Smith moving. The tight ends were a big part of the attack with Will Dissly and Colby Parkinson accounting for the two touchdown passes Smith threw in the game.

Eight different receivers touched the football for Seattle in the victory. The ball came out quickly and on time most of the night with Smith sacked just twice, both coming from linebacker Bradley Chubb.

For better or worse, Wilson runs an offense that hasn't changed much through the years. Despite three different offensive coordinators, Seattle always defaulted back to the things Wilson did well. Smith has a different toolbox of things he does well that allowed the offensive scheme to seem more layered and dynamic.

At its root, offensive coordinator Shane Waldron's offense is in the same family as Sean McVay's with the Los Angeles Rams and Kyle Shanahan's with the San Francisco 49ers. Seattle's offense more closely resembled those attacks against Denver than it did last year under Wilson. While Smith may not have the ceiling of Wilson in ability, his skill-set might be a better fit for the attack Waldron wants to employ.

Defense comes up big with pair of goal line stands

Though the Broncos came away with only 16 points, they threatened the end zone several more times against Seattle and came up empty.

Quandre Diggs and Uchenna Nwosu each forced fumbles on carries by Denver running backs from the 1-yard line in the third quarter. Michael Jackson recovered both loose balls as the Seahawks turned away Denver at the goal line.

"Stop the damn run. Simple," nose tackle Al Woods said. "We knew they were going to run it and try to overpower us. We wouldn't let that s--- happen."

Diggs stripped Melvin Gordon as he tried to reach the ball across the goal line on fourth down. Nwosu dislodged the ball from Javonte Williams on a third down carry on the next Denver possession.

"The red-zone stops were huge, but that’s also why God creates a defensive line," defensive end Shelby Harris said. "We go out there, we get penetration, and we make plays. Outside and inside, it’s a great combo."

The Broncos had four drives inside the Seattle 15-yard line and came away with just six points on a pair of field goals.

"Give us a blade of grass, we’re going to protect it, and that was our mindset," Nwosu said. "Going down there, and anytime you’re backed up, you’re in the red zone, you’ve got to nut up. That’s where big boys put on their big shoulder pads, and they go to work. And that’s what we did today. Our defense was able to force two turnovers down there and recover the ball, so that’s huge. That’s what we’re going to keep emphasizing throughout practice and throughout the season and we’re going to keep doing it."

Jamal Adams injury is a blow to Seahawks defense

The Seahawks lost Jamal Adams to a left knee injury in the second quarter Monday night. Carroll said after the game the injury appears to be significant.

"He hurt his knee tonight," head coach Pete Carroll said. "Not a typical knee injury. His quadriceps tendon, I think, got damaged some tonight. He got hurt. So it's a serious injury."

The injury for Adams came on the first play of the night where they had Adams playing in linebacker alignment with Josh Jones on the field as a third safety. It's a package Seattle had used throughout training camp and was looking to use to maximize Adams' impact on the game. It seemed promising as well as Adams nearly sacked Wilson on the play as he dumped the ball away for an incompletion on a third down.

Jones replaced Adams at strong safety for the rest of the game. They only deployed a three-safety look again briefly late in the game with Ryan Neal as the extra man on the field.

Even if Adams hasn't reached the ceiling the Seahawks hoped when they acquired him from the Jets in 2020, he's a big personality and a leader for the team that would be a loss not to have available. The Seahawks will have to wait for results of an MRI to determine exactly how significant an injury it is and if he has any chance of returning this season.