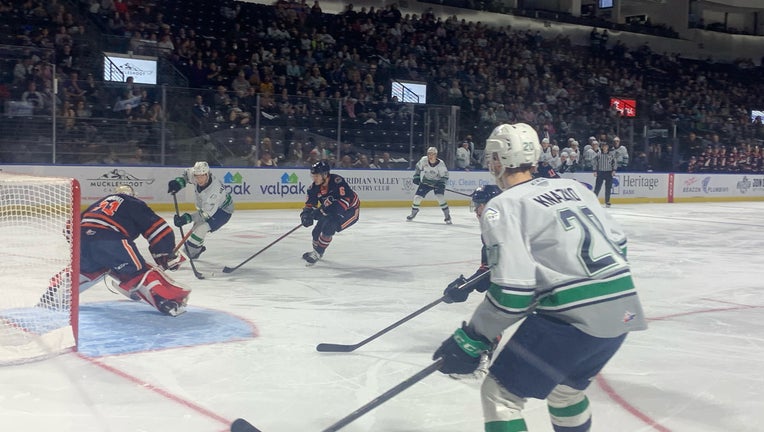 Jordan Gustafson (No. 7) of the Seattle Thunderbirds beats Kamloops defenseman Viktor Persson (No. 6) and gets set to shoot on net on a shot that beat goalie Dylan Garand to tie the game at 1-1 in Game 4 of the WHL's Western Conference Championship S (photo by Curtis Crabtree / FOX 13 Seattle)

The victory evened up the series at 2-2 ahead of a return to Kamloops for Game 5 on Friday night.

"It felt unbelievable," Myatovic said. "We were pressing all overtime long and all game long where we just thought that they might break and we just stuck with it and we ended up getting on the right side.

"I blacked out most of the time but it felt unreal and just felt good to help contribute to the team win."

With the puck against the boards behind the net, Lucas Ciona dug it out of the corner and it found its way to Myatovic with pace in front of the net. Myatovic corralled the puck and fired a wrist shot past Garland into the net with 8:44 left in the overtime period to seal the win for the Thunderbirds.

"It came out of the corner pretty fast," said Jordan Gustafson, who was also waiting for the puck to come out of the corner on the goal line. "It kind of just went ‘zip’ by me and right on Nico's tape and he finished the job, so it was a pretty nice play (by Lucas)."

The line of Myatovic, Jordan Gustafson and Ciona were responsible for both goals on the night for Seattle. They stepped up for Seattle with both Henrik Rybinski and Lukas Svejkovsky out with injuries Wednesday night. Rybinski was a free agent signing of the Washington Capitals this year. Svejkovsky was a fourth-round pick of the Pittsburgh Penguins in 2020 that signed an entry-level deal with the team this spring.

"Those are obviously two big pieces of our team but with two big players out like that it gives other players on our team a chance to step up and make a pretty big difference. So I think that's exactly what we did here with our team. A lot of players stepped up and it worked out," Gustafson said.

After allowing three goals in the opening period last night, the Thunderbirds controlled the action early. Seattle out-shot Kamloops by a 7-0 margin over the first seven minutes of action with a pair of shots deflected off the post. Kevin Korchinski had a shot from the blue line deflected in front of the net off the post and Reid Schaefer had a near-breakaway try that Dylan Garand caught a piece of as it, too, deflected off the frame and out.

However, a tripping penalty late in the period from Sam Popowich gave the Blazers a power play chance. Daylan Kuefler, who scored two games in Kamloops' Game 3 victory, maneuvered a puck around the edge of the crease and avoiding an outstretched Thomas Milic to put the Blazers up 1-0 with 53.3 seconds left in the period.

An interference penalty on Mats Lindgren gave Seattle their first power play chance early in the second period. Jordan Gustafson made it count as he took a pass from Lucas Ciona, used a toe drag to get past defenseman Viktor Persson and beat Garand over his glove to tie the game at 1-1 less than two minutes into the period.

Two interference penalties in the second period from Reid Schaefer put Seattle on the defensive.

Milic had a key early save as the second Schaefer penalty was winding down. Matthew Seminoff got a good look from the slot that Milic shouldered away.

Milic finished the game 35 saves on 36 shots faced with the only goal by Kamloops coming on a power play.

The Thunderbirds thought they took the lead with 14:50 left to play as the puck ended up behind Garand after a collision in front of the net.

Ciona crashed into Garand and the goal was immediately waved off. Ciona took a hit from Persson that knocked him into Garand. However, the play was reviewed and the goal remained disallowed.

Another would-be goal was waved off due to a hand pass right in front of the net that blew the play dead as the loose puck was then fired into the back of the net with just under nine minutes left to play.

"We've got a resilient group, lots of character," head coach Matt O'Dette said. "It's playoffs. There's lots of ups and downs and a roller coaster of emotions and you have to do the best you can at staying focused. We're an emotional group but I think we did that for the most part."

"It feels unreal," Myatovic said of knowing they'll be back home for a Game 6. "We're going to need the fans behind us so we're going to be ready to go Game 5 and Game 6." 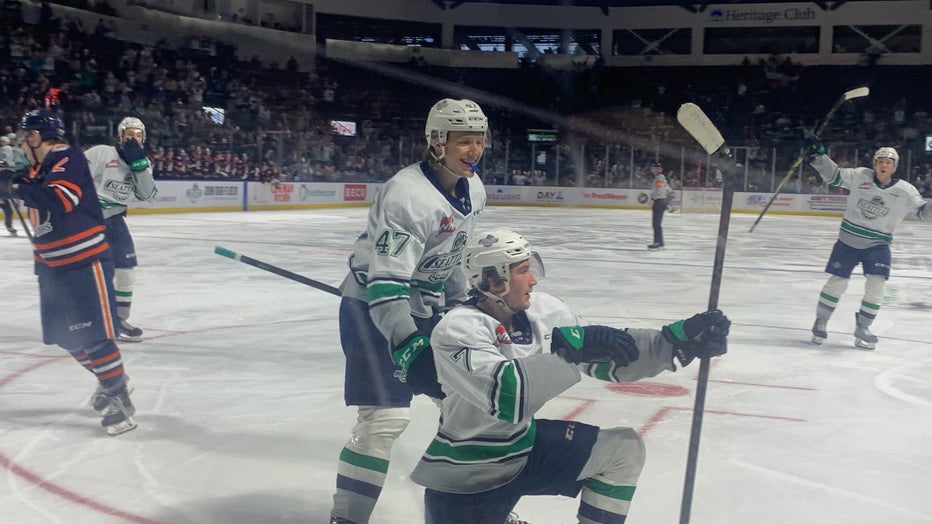 Jordan Gustafson (No. 7) celebrates his goal that tied up Game 4 of the WHL's Western Conference Championship Series at 1-1 against the Kamloops Blazers on May 25, 2022 at the ShoWare Center in Kent, Wash. on an assist from Lucas Ciona (No. 47). (photo by Curtis Crabtree / FOX 13 Seattle)