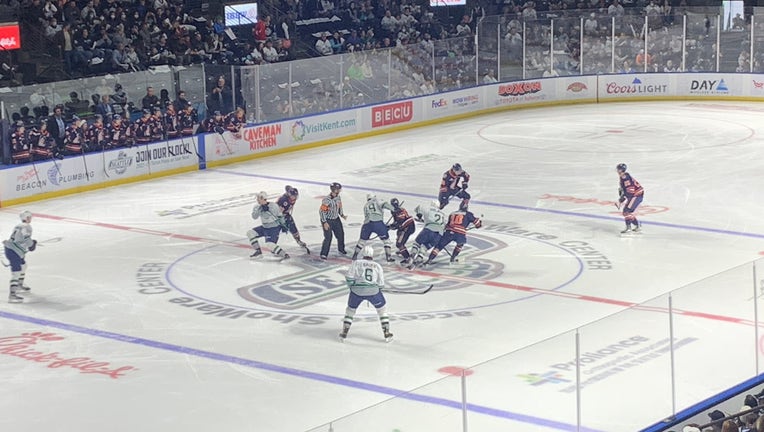 Opening face-off of Game 3 of the WHL's Western Conference Championship Series between the Seattle Thunderbirds and Kamloops Blazers on May 24, 2022 at the Showare Center in Kent, Wash. (photo by Curtis Crabtree / FOX 13 Seattle)

KENT, Wash. - A hat trick from Logan Stankoven and two goals from Daylan Kuefler carried the Kamloops Blazers to a 6-3 victory over the Seattle Thunderbirds in Game 3 of the Western Hockey League's Western Conference Championship Series.

The Blazers hold a 2-1 lead in the series after a 4-1 win by Seattle on Saturday in Kamloops had leveled the series.

The Blazers jumped out to an early lead as Stankoven – a second-round pick of the Dallas Stars last year – scored just 27 seconds into the first period. Drew Englot fed a puck from behind the net out in front to an open Stankoven, who beat Thomas Milic to give Kamloops a 1-0 lead.

With Lucas Ciona in the penalty box for a cross-checking penalty, the Blazers struck again. Kuefler redirected a shot from the point from Quinn Schmiemann by Milic to make it a 2-0 game.

Just 18 seconds later, Stankoven added his second goal of the night as a shot from Luke Toporowski snuck through the pads of Milic for Stankoven to clean up on the door step to give Kamloops a 3-0 lead less than 12 minutes into the contest.

"Well obviously a pretty bad start," head coach Matt O'Dette said. "We can't come out of the gates like that. We gave up one first shift. Spot them a three-goal lead, that's not the recipe for success. I thought we turned it up for different stretches of the game but you have to start better. We have to jump on our game plan obviously much sooner than that and we didn't do it."

The Thunderbirds managed to cut into the deficit before the end of the period. With Matthew Rempe and Caedan Bankier both off for matching roughing penalties to set up a 4-on-4 situation, Kevin Korchinski fired a wrist shot from the high slot that beat Dylan Garand to make it a 3-1 game.

"I knew I had a lane to the net so I tried to shoot glove side and it went in," Korchinski said.

Seattle had a goal stolen away from in the second period. A shot from Ciona slipped by Garand and seemed destined to cross the goal line. Instead, an alert Blazers defenseman managed to pull the puck off the line to save a goal and temporarily preserve the two-goal advantage.

"Two good teams, the margin for error is small, which means you have to clean up some of the mistakes," O'Dette said. "Stay out of the box. We took a couple of penalties that were avoidable. Couple of our chances we needed to convert or get a bounce and sometimes that's playoff hockey. You don't get rewarded when you don't start the right way and the bounces just didn't go in our favor."

Shortly after, Seattle did manage to cut into the deficit again. Jared Davidson chipped a rebound of a Nico Myatovic shot into the net past Garand to cut the Kamloops lead to 3-2.

The Thunderbirds had controlled much of the second period as they fought back into the contest. However, a point shot from Schmiemann beat Milic with 2:02 left in the period to serve as a critical blow.

Seattle couldn't cash in on a power play chance in the third and Kuelfer added his second goal of the night with just under seven minutes left to play to put the game cleanly out of reach.

Rempe added a goal for Seattle with 3:47 left to play to cut the deficit to 5-3, but Stankoven added an empty goal from three-quarters ice with 1:15 left to polish off the 6-3 final.