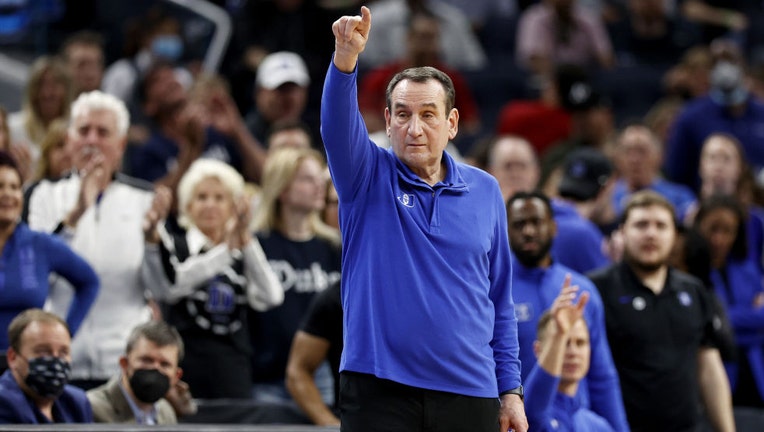 SAN FRANCISCO - Duke keeps winning games in the NCAA Tournament and Mike Krzyzewski keeps telling anyone who will listen, "It’s not the coaching."

For one thing, Duke relies almost entirely on freshmen and sophomores, which means his core group of players have only had so much time to soak up Coach K's decades of gathered wisdom. For another, Krzyzewski switched to a zone defense in the second half of Thursday night's Sweet 16 game against a rugged Texas Tech team, but when the Blue Devils needed big stops down the stretch his players lobbied — successfully — to go back to man-to-man.

Finally, and most important, perhaps, those same kids who are supposed to be feeling the pressure of his impending retirement shot 71% from the floor after halftime, hitting eight straight field goals to end the game. There's no coaching manual that covers that.

But don't be fooled.

On the same night two No. 1 seeds were toppled, the reason Krzyzewski won the 100th NCAA Tournament game of his career and remains squarely on track toward a sixth national championship is....coaching. No one does it better.

He’s been recruiting kids who ooze with NBA-caliber talent for four decades now — which is a specialty all its own — and then teaching them the difference between showing up and showing off when the game is on the line. Duke had played zone defense roughly 5% of the time during the regular season, which made it a risky gambit when Coach K threw the switch against the Red Raiders.

Then he listened to his players when they pleaded to switch back, which is even riskier, and more to the point, it proved that at age 75, the old Blue Devil is still willing to learn new tricks.

"Whenever they can own something, they’re going to do it better than if we just run it," Krzyzewski said afterward. "When they said that, I felt they’re going to own it. They’ll make it work, and that’s probably more important than strategy during that time. So that’s the way I looked at it."

Three key defensive stops that followed and two late baskets by Jeremy Roach moved Krzyzewski within one win of his record-setting 13th trip to the Final Four with a 78-73 victory. Paolo Banchero led second-seeded Duke with 22 points, Mark Williams scored 16 and Roach, handed his starting spot back just ahead of the tournament, added 15.

Duke will play Arkansas on Saturday with a trip to the Final Four on the line. That's after the fourth-seeded Razorbacks, who bear some resemblance to the "40 Minutes of Hell" Arkansas teams that tore up the tournament in the mid-1990s, tore up top overall seed Gonzaga en route to a 74-68 win.

Much like those teams, coach Eric Musselman has loaded up tenacious defenders and shooters with short memories — notably JD Notae, who missed 20 shots and still scored 21 points — and has the Razorbacks convinced it's them against the world.

"We’ve been disrespected the whole year, so it’s just another thing for us," Jaylin Williams said. "We saw everything they were saying, we felt like they were dancing before the game."

"We had a chip on our shoulder," he added a moment later. "Every game we do."

Whatever the Zags had on their shoulders felt like a 40-pound weight. Entering as the top-scoring team in the nation (87.8 points per game), Gonzaga shot 37.5% and went 5 of 21 from 3-point range. NBA prospect Chet Holmgren, the Zags' skinny freshman center, was hounded all night and spared himself a few minutes of hell by fouling out with 3:29 left.

Speaking of discomfort, fifth-seeded Houston did a pretty good job of exploiting top seed Arizona's lack of experience. The Wildcats missed seven of their first eight shots as Houston sprinted to a 14-4 advantage and led the rest of the way, riding 21 points from Jamal Shead and 19 from Kyler Edwards to a 72-60 win.

"I knew we were going to make them uncomfortable, that’s what we do," Cougars coach Kelvin Sampson said. "Our team, we’re a tough bunch. They’re not afraid of anybody."

Houston lost four starters from last season and then lost Marcus Sasser, the lone returner and leading scorer who broke his left foot before Christmas. And then Taze Moore, one of the transfers Sampson relied on, got hit with his third personal foul against Arizona with 9:22 left and wound up playing only 17 minutes overall.

"Tonight, you know, he was in the witness protection program," Sampson said. "I couldn’t find him. Nowhere. We put him in there, we had to take him right back out."

That won't do against second-seeded Villanova, where coach Jay Wright has been quietly fashioning a mini-dynasty of his own. The Wildcats don't play the "no-respect" card because they win too much — two national championships since 2016 — and they put together another workmanlike performance to send No. 11 seed Michigan packing with a 63-55 victory.

Jermaine Samuels, a freshman during that last title run in 2018 — capped off against Michigan, no less — led Villanova with 22 points, and drew the unenviable assignment of battling 7-foot-1 Hunter Dickinson on both ends of the floor. Dickinson led Michigan with 15 points and 15 rebounds, but none of them came easy.

"I just wanted to stay mobile and move," Samuels said. "He’s a phenomenal player, so he’s going to get great looks at the basket. But that I have teammates behind me gave me all the confidence I needed."