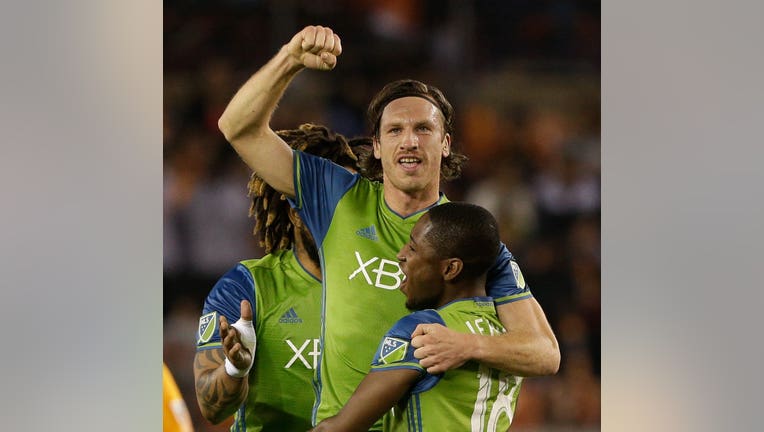 HOUSTON (AP) — Gustav Svensson and Will Bruin scored in the first half, and Seattle Sounders FC beat the 10-man Houston Dynamo 2-0 in the first leg of the Western Conference championship Tuesday night.

The second leg is Nov. 30 in Seattle.

Svensson gave the defending MLS Cup champion Sounders a 1-0 lead in the 11th minute, heading a Nicolas Lodeiro corner kick just right of the middle from eight yards out.

Bruin upped the lead to 2-0 in the 42nd minute, heading a Joevin Jones crossing pass into the left net from just right of the middle eight yards out.

Lodeiro missed a chance to extend the lead to 2-0 in the 28th minute as his penalty kick was saved by Joe Willis, who dove to his left and batted it outside the near post.

Seattle was awarded the penalty kick in the 27th minute after Jones was pulled down from behind in the box by Jalil Anibaba, who was given a straight red card.

Houston, making its first appearance in a conference finals since losing in the Eastern Conference finals in 2013 to Sporting KC, had several chances early, highlighted by Tomas Martinez's shot from the upper box that was easily saved by Tyler Miller in the 12th minute. However, the Dynamo had few opportunities thereafter.