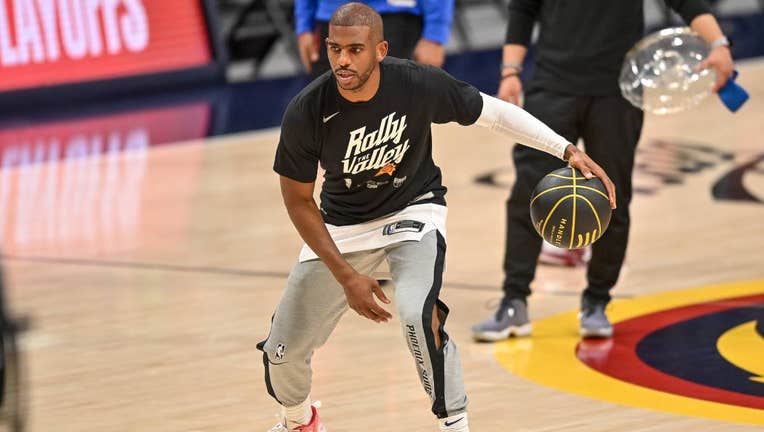 DENVER, CO - JUNE 13: Chris Paul #3 of the Phoenix Suns warms up before Game Four of the Western Conference second-round playoff series at Ball Arena on June 13, 2021 in Denver, Colorado. NOTE TO USER: User expressly acknowledges and agrees that, by

LOS ANGELES - Chris Paul is expected to play for the Phoenix Suns Thursday night in Game 3 of the Western Conference finals against the Los Angeles Clippers.

Paul was upgraded to available from probable on the league’s injury report and participated in the team’s shootaround on June 24. He missed the first two games while in the NBA’s health and safety protocols since June 16.

Chris Haynes of Yahoo! Sports first reported that Paul planned to return for Game 3 in Los Angeles after clearing the NBA's health and safety protocols.

"He’s back with us. It was great to have him on the court, walk through a few things, talk to him about some stuff that we’ve been talking about amongst one another. It was great to just have one of our guys back in the lineup and ready to go," forward Jae Crowder said.

The Athletic's Shams Charania first reported that Paul would be sidelined for "an indefinite period of time."

The 36-year-old point guard has been vaccinated against COVID-19, said a person with knowledge of the situation, speaking to The Associated Press on condition of anonymity because of privacy concerns. That could mean Paul could be cleared to return more quickly than some who tested positive earlier this season before vaccines were readily available.

In March, the league also relaxed some of the protocols that were put into place last fall, doing so in response to players and coaches choosing to receive the vaccine that protects against the coronavirus.

But the league also cautioned at that time that "if an individual has symptoms consistent with COVID-19, the previous protocols apply" — which would still mean that anyone with those symptoms "may be subject to quarantine" regardless of their vaccination status.

Paul averaged 25.5 points, 10.2 assists and 5.0 rebounds in the second round against Denver. He scored a game-high 37 points in the final game of the series on June 13.

Phoenix has been on a roll, winning nine straight postseason games, including the first two of the Clippers series.

Paul — who played for the Clippers from 2011-17 — was named to the All-NBA Second Team earlier this week. He averaged 16.4 points during the regular season and 15.7 points in the playoffs.