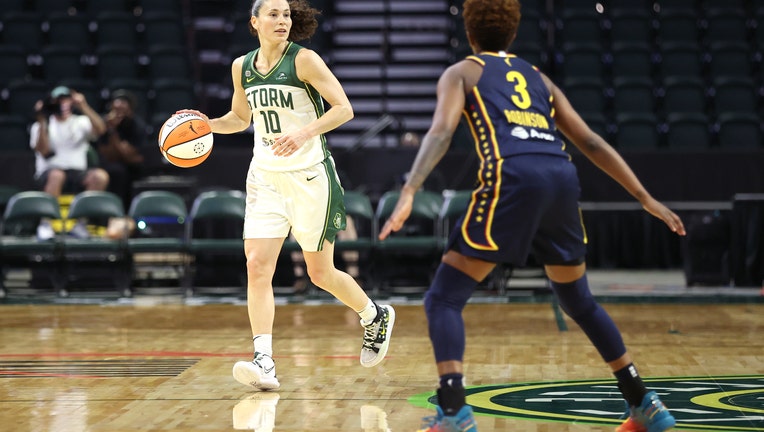 EVERETT, WASHINGTON - JUNE 01: Sue Bird #10 of the Seattle Storm dribbles down the court against Danielle Robinson #3 of the Indiana Fever during the third quarter at Angel of the Winds Arena on June 01, 2021 in Everett, Washington. NOTE TO USER: Use

SEATTLE - Breanna Stewart had 21 points and Sue Bird moved into sixth place on the WNBA career scoring list in the Seattle Storm’s 84-74 victory over the Los Angeles Sparks on Sunday night.

Ezi Magbegor added 20 points and Epiphanny Prince had 18 to help the Storm (14-4) keep pace with the Las Vegas Aces for the top spot in the WNBA standings.

Brittney Sykes and Erica Wheeler had 19 points each for the Sparks (6-11), and Nia Coffey added 11.

The Samuelson sisters — Karlie of the Sparks and Katie Lou of the Storm — played against each other for the first time. Chiney and Nneka Ogwumike were the first sisters to face up in a WNBA game.