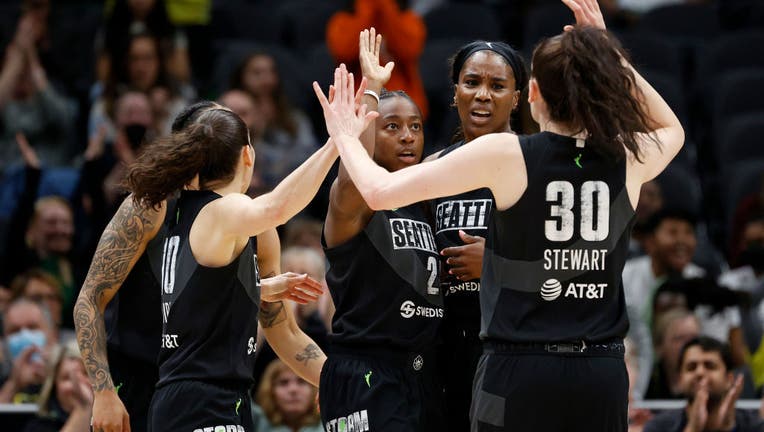 SEATTLE, WASHINGTON - MAY 06: Jewell Loyd #24 of the Seattle Storm is congratulated after her three point basket against the Minnesota Lynx during the first half at Climate Pledge Arena on May 06, 2022 in Seattle, Washington. NOTE TO USER: User expre

SEATTLE - Sue Bird and Breanna Stewart drilled a pair of 3-pointers as part of a 10-0 run to open the second half that carried the Seattle Storm to a 97-74 victory over the Minnesota Lynx in their season opener and first game at Climate Pledge Arena.

The Storm outscored the Lynx 34-14 in the third quarter alone as they surged to an opening victory in their first game back at Seattle Center since 2018. Bird and Jewell Loyd combined to take over the contest as the duo combined for 17 points in the frame as they took a 75-55 lead into the fourth quarter.

"We get hot quick," Loyd said. "All we need is one shot to go in and then we start feeding off the energy of the crowd, each other, our coaches. Ever since I've been here we've been able to put on stretches where we score quickly. … We were able to get a better rhythm faster than them and we didn't want to let it go."

After the 10-0 run to open the quarter was finally ended by Lynx star Sylvia Fowles, the Storm immediately starter a new run. A 3-pointer from Gabby Williams, a three-point play from Loyd and another pair of free throws from Loyd made up an 8-0 run that extended the lead to 59-43 in less than five minutes of action.

Beyond the performance on the court, Stewart focused on a different aspect that stood out during their 18-2 run to open the second half.

"The fans," she said. "In Seattle, since we haven't been here since 2018, it's like you know when we're going on that run when it's three, three, three and then the place is rocking, the other team, they have to call a time out or they're not going to be able to get what they want."

Head coach Noelle Quinn credited the team's play on the defensive end of the court as being key to sparking their third quarter run.

"I'm not worried about our offense. Our offense is going to be OK," Quinn said. "What we have to hang our hat on is getting stops defensively and making sure our activity never wavers and being on a string with one another and creating easier offensive opportunities through our defense."

Stewart scored 10 of her 17 points in the fourth quarter as the Storm continued to pull away. Stewart and Loyd both finished with 17 points for Seattle as they watched the last several minutes of the game from the bench with the victory in hand.

The Storm had to dig themselves out of an early hole. Fowles and Aerial Powers led the Lynx to an 18-8 advantage late in the first quarter.

SEATTLE, WASHINGTON - MAY 06: Jewell Loyd #24 of the Seattle Storm is congratulated after her three point basket against the Minnesota Lynx during the first half at Climate Pledge Arena on May 06, 2022 in Seattle, Washington. NOTE TO USER: User expressly acknowledges and agrees that, by downloading and or using this photograph, User is consenting to the terms and conditions of the Getty Images License Agreement. (Photo by Steph Chambers/Getty Images)

Seattle slowly clawed into the lead with a steal and basket by Stephanie Talbot inside the final minute cutting the lead to 20-18. A 3-pointer from Talbot gave Seattle a 27-24 advantage. After a Fowles basket, Loyd delivered a 3-pointer from the corner and was fouled by Odyssey Sims. Loyd converted the free throw to make it a 31-26 Storm lead.

"Once we settled in, we were fine and I knew that was going to happen," Quinn said as she added the team had some early jitters playing back at home for the first time in three years.

Minnesota had another run in them as well. With Seattle holding a 34-28 lead after a Jantel Lavender 3-pointer, the Lynx went on an 11-0 run of their own to retake the lead, 39-34.

Bird's first basket came with 58 seconds in the first half on a 3-pointer from the top of the key. The shot tied the game at 39-39 and the two teams would head into halftime tied at 41-41 after Powers and Ezi Magbegor traded baskets in the final minute.

The Storm then laid the hammer down in the second half as their left the Lynx in the dust.

"Usually most teams can stick with us for the first half, but it's the third quarter, the fourth quarter where we really wear on teams. The third quarter I think we had, I don't know how many threes, but when you just get hit with those threes, it's tough I guess," Stewart said.

Fowles finished with 16 points to lead the way for Minnesota. Powers scored 14.

Epiphanny Prince and Talbot added 13 and 11 points off the bench, respectively, for the Storm as 39 points came from the bench.