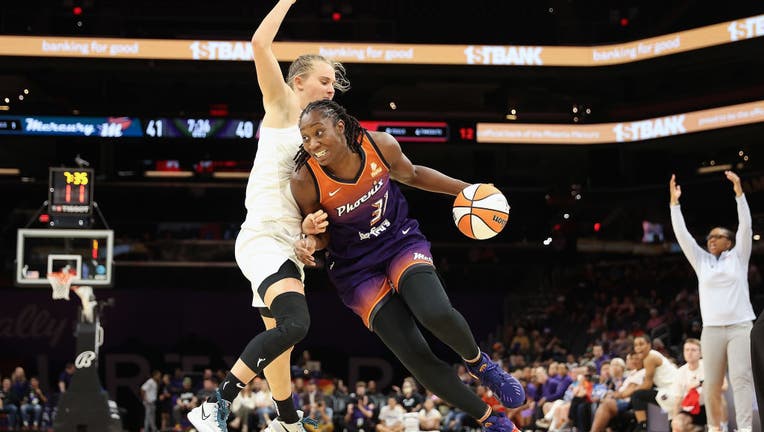 PHOENIX, ARIZONA - JUNE 10: Tina Charles #31 of the Phoenix Mercury handles the ball against Kristy Wallace #3 of the Atlanta Dream during the second half of the WNBA game at Footprint Center on June 10, 2022 in Phoenix, Arizona. The Mercury defeated

SEATTLE - The Seattle Storm signed eight-time All-Star and former WNBA MVP Tina Charles to a contract on Tuesday for the remainder of the 2022 season.

Charles is a five-time first-team all-WNBA selection and has twice led the league in scoring in 2016 and 2021. She ranks fifth in league history with 6,889 career points and is just six points behind Candice Dupree for fourth on the all-time list.

Charles also second in career rebounds with 3,507 and has led the league four times in her 12 seasons in the WNBA.

Charles was released by the Phoenix Mercury on Saturday amidst a growing rift between the two sides.

"It was extremely tough," Charles said of the last few days. "I didn't go into the season this year thinking I would switch teams. That's something that I've never done in my career. But at this point in my career and just what I'm trying to get out of it at the end of the day, how I want to be coached, what type of a culture I want to be a part of, it was very imperative for me – championship or not – what am I surrounded by? And that's what it really was for me."

Per ESPN.com, Charles was reportedly unhappy with her role with the Mercury and had a desire for more shots.

"After discussions with Tina and her agent, it was best for both parties to go our separate ways at this time," Mercury general manager Jim Pitman said in a statement announcing the move. "Due to circumstances both in and out of our control, our season has not gone according to our plan, and we will continue to pursue all avenues for improvement."

Charles was averaging 17.3 points per game this season in 16 games for Phoenix. That mark is her second-lowest average since 2015.

Finding the right role for Charles could be a bit of a challenge for the Storm. Ezi Magbegor has had a breakout campaign for the Storm in the front court, averaging 12.6 points and 5.8 rebounds per game. With Stewart, Charles and Magbegor, there may be a bit of a logjam in the post for the Storm to figure out playing time for moving forward.

Charles played college basketball at the University of Connecticut, which is the same school as Storm stars Breanna Stewart, Sue Bird and Jewell Loyd. Stewart and Bird have both been teammates of Charles on the U.S. Olympic team. Charles, Stewart, Bird and Lloyd are all former WNBA No. 1 overall draft picks.