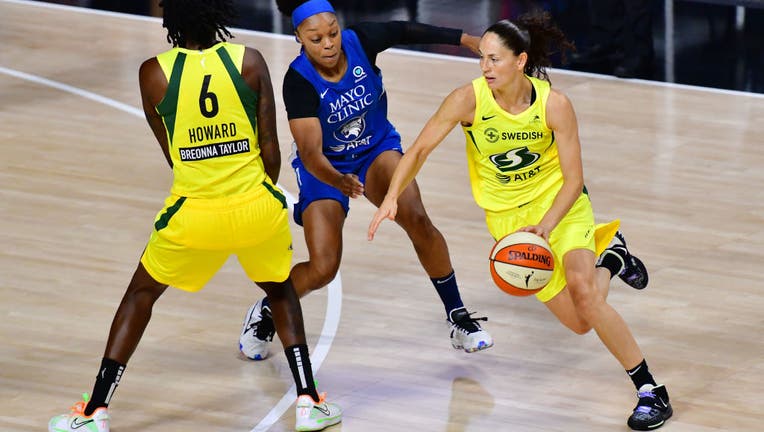 PALMETTO, FLORIDA - SEPTEMBER 27: Sue Bird #10 of the Seattle Storm drives to the basket around Odyssey Sims #1 of the Minnesota Lynx during the first half of Game Three of their Third Round playoff at Feld Entertainment Center on September 27, 2020

BRADENTON, Fla. - Breanna Stewart put forth a career effort to get the Seattle Storm back to the WNBA Finals.

Stewart scored a career playoff-high 31 points — tying Seattle’s franchise playoff record — and Sue Bird had 16 points and nine assists, and the Storm beat Minnesota 92-71 on Sunday to sweep the Lynx and advance to the championship round for the second time in three seasons. The Storm won the title in 2018.

“It’s an amazing feeling to be back,” Stewart said. “Be back with Seattle and be back in the finals and I can’t wait for Game 1 Friday.”

Stewart, who missed all of last season while recovering from a torn Achilles’ tendon added six rebounds, seven assists, three steals and two blocks. Mercedes Russell tied her season high with 10 points for the No. 2 seed Storm.

The Storm will play either top-seeded Las Vegas or No. 7 seed Connecticut in the Finals, which begin Friday. Seattle lost both regular season matchups with the Aces — including an 86-84 loss in the regular season finale — and won its two regular season games against the Sun by an average of 18 points.

Bird and Stewart combined to score or assist on 13 points during a 17-0 run that gave Seattle a 24-8 lead when Sami Whitcomb made a layup with 54.2 seconds left in the first quarter. Stewart made a short jumper to push the Storm’s lead to 18 points with 1:05 left in the first half but Minnesota scored 16 of the next 21 points, including six by Crystal Dangerfield and two 3-pointers by Odyssey Sims, to make it 48-41 about three minutes into the third quarter.

Stewart answered with back-to-back layups and, after Jewell Loyd made another layup, Stewart converted a three-point play and then hit a 3 in a 12-0 run that made it 60-41 about four minutes later and Minnesota trailed by double figures the rest of the way.

“This was a special season with a special group,” Minnesota coach Cheryl Reeve said. “No one thought we’d get past the Seattle Storm. We believed we could be competitive. We were confident. Today’s game was disappointing in so many ways. Didn’t see that coming.”