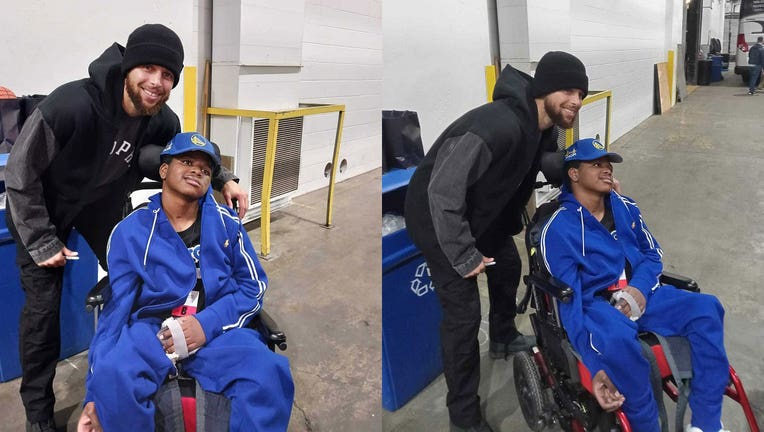 Ladavionne Garrett Jr. got the chance to meet his basketball hero on Sunday, as Stephen Curry visited and signed autographs for the boy.

MINNEAPOLIS (FOX 9) - A boy who survived being shot in the head in Minneapolis, one of three shootings that shook the community in 2021, had the chance of a lifetime on Sunday to meet his basketball hero.

Garrett's grandmother writes: "He couldn't stop smiling. I thank God for this day. My grandson deserves this so much. They gave him 72 hours and he has been home from the hospital for a year."

"Stephen Curry is Junior's favorite basketball player and he made Junior's day today – especially when he signed Ladavionne Junior's hat. I'm one happy grandma and my g-boys can't stop talking about the experience. They say I'm the best."

Garrett is on the long road to recovery after he survived being hit by a stray bullet in April 2021 when he was only 11 years old. Garrett was riding in a vehicle with his parents when the vehicle was hit by gunfire, striking Garrett Jr. in the head.

Garrett suffered life-changing injuries and was hospitalized for months after the shooting.

Garrett was the second of three children who were shot in Minneapolis over the course of three weeks in April and May of 2021. The shootings lead activists to demand changes from the city to battle rising crime.

So far, police have only made one arrest in connection to the shootings, charging a man with the shooting of 9-year-old Trinity Ottoson-Smith.