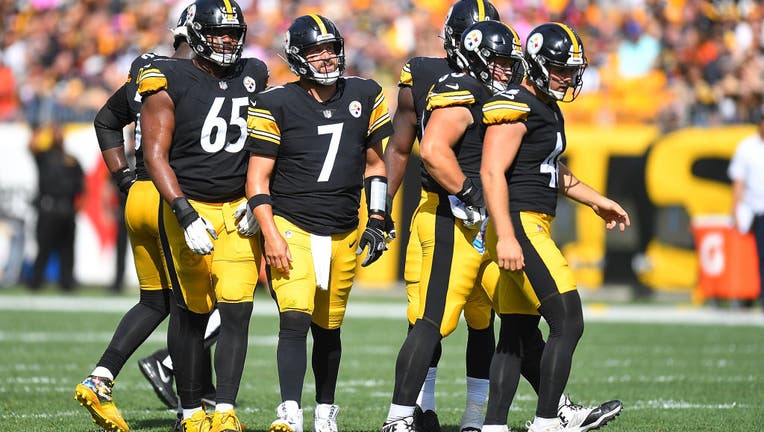 PITTSBURGH, PA - OCTOBER 10: Ben Roethlisberger #7 of the Pittsburgh Steelers looks on during the game against the Denver Broncos at Heinz Field on October 10, 2021 in Pittsburgh, Pennsylvania. (Photo by Joe Sargent/Getty Images)

SEATTLE - Ben Roethlisberger is encouraged. The Pittsburgh Steelers quarterback, however, is not convinced his team’s early offensive struggles are firmly in the rearview mirror.

Yes, there were signs of progress last week against Denver. Najee Harris ran with what is becoming his trademark fury. The offensive line created time for its 39-year-old quarterback to look downfield as the Steelers ended a three-game losing streak.

Still, it was just four quarters of competence. Roethlisberger is well aware more needs to be done if Pittsburgh (2-3) wants to get back into the AFC North race starting on Sunday night against injury-riddled Seattle (2-3).

"Listen, by no means are we going to sit here and say, ‘Oh, we’re fixed. We’re this great offense.’ We’re not there yet," Roethlisberger said.

Neither are the Seahawks.

Quarterback Russell Wilson is out several weeks while recovering from surgery on the middle finger of his right (throwing) hand. Geno Smith will make his first start in nearly four years while the Seahawks will play their first game without Wilson under center since 2011.

"We understand there’s a lot of people who are counting us out, a lot of people that believe we can’t do it," linebacker Bobby Wagner said. "We’ve proved people wrong in the past before, and I don’t see why the future doesn’t turn out the exact same way."

Having the NFL’s worst defense take a significant step forward would help. The "Legion of Boom" days are long gone, replaced by a group that’s more "fall down, go boom." Seattle has allowed at least 450 yards in each of its past four games, tying an NFL record.

"If I had to pinpoint one thing, it’s that early on we got in our way a lot," Wagner said. "Whether it’s penalties, whether it’s mistakes and miscommunications, and so that’s probably the biggest thing. If we can fix those things, we have the talent and we have the people to be a great defense."

At the moment, adequate would be an improvement.

Considering the unknown of having Smith under center for a full game, the Seahawks could have used the boost of running back Chris Carson returning after missing last week with a neck issue.

But that won’t be the case as Seattle ruled Carson out due to the neck problem and is considering a stint on injured reserve for the starting running back.

Alex Collins is a proven, capable backup and will get his second straight start. Collins ran for 47 yards on 15 carries against the Rams but he’s not Carson, who had 87 yards of total offense in Seattle’s 28-26 victory at Heinz Field in 2019.

The Steelers have injury issues of their own. Wide receiver JuJu Smith-Schuster is out the rest of the season after injuring his right shoulder against the Broncos. The fifth-year veteran had evolved into a reliable third-down option for Roethlisberger and is one of the league’s best downfield blockers.

Perhaps just as importantly, Smith-Schuster gave a young wide receiver group an unquestioned leader. Now Chase Claypool, James Washington and Diontae Johnson will have to find a way forward without him and Roethlisberger will have to find somewhere else to look on possession downs.

"JuJu’s one of those guys that isn’t afraid of contact," Roethlisberger said. "But you’ve got to be built for it too, and he is. Always was a guy that was physical and kind of set the tempo, so hopefully, other guys will just carry that on."

Wilson has been under center for the Seahawks for every regular season and playoff game since the start of 2012. The previous time the starting QB for Seattle wasn’t named Wilson was Jan. 1, 2012, when the Seahawks lost 23-20 at Arizona in Week 17 to finish one of two seasons in Carroll’s tenure where they didn’t make the playoffs.

The QB that day was Tarvaris Jackson, who went 21 of 35 for 222 yards, one touchdown and one interception in the overtime loss.

Harris had the first 100-yard game of his career when he ran for 122 against the Broncos. That number might have been even higher if not for a bout with cramps in the fourth quarter that forced him to watch Pittsburgh’s final drive from the sideline.

Harris dealt with cramps at times during his career at Alabama, blaming the problem on the humidity in the south and east, the kind he didn’t deal with while growing up in Northern California.

Maybe, but the Steelers need him to be available in crucial situations.

"We’re continually managing that," Pittsburgh coach Mike Tomlin said. "We’ve just got to do it a little bit better, but I will acknowledge that he had a little bit more work in that game (a season-high 23 carries) than he had in others, and so we’ll continue to adjust and find our footing there."