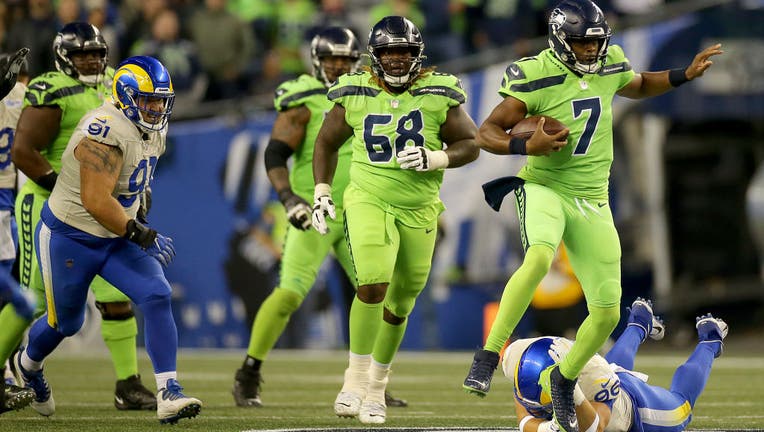 SEATTLE, WASHINGTON - OCTOBER 07: Geno Smith #7 of the Seattle Seahawks carries the ball during the second half against the Los Angeles Rams at Lumen Field on October 07, 2021 in Seattle, Washington. (Photo by Lindsey Wasson/Getty Images)

SEATTLE - Matthew Stafford was able to manage the discomfort with the finger on his throwing hand and pick apart the Seattle Seahawks’ beleaguered defense.

Meanwhile, Russell Wilson was left as a spectator. His own finger injury was too severe for the Seattle’s star quarterback to continue against the division rival.

"It was just a little bit out of place and was able to put it back in and keep going," Stafford said. "It didn’t affect me too much, to be honest with you."

Stafford seemed just fine, throwing for 365 yards and a touchdown and the Rams beat the Seahawks 26-17 on Thursday night in a game Wilson left in the second half with the finger injury on his throwing hand.

Wilson missed significant game time due to injury for the first time after injuring the middle finger on his throwing hand. Wilson was hurt by contact on a follow through midway through the third quarter. He attempted to direct one more drive before turning the game over to backup Geno Smith.

Seattle coach Pete Carroll said it was a "badly sprained finger," and that further tests would be coming.

"He wasn’t able to hold on to the football the way he needed to to throw," Carroll said.

Held to just three points in the first half for only the fifth time in the regular season under Sean McVay, the Rams (4-1) woke up in the final 30 minutes and rebounded from their first loss of the season last Sunday to Arizona.

Stafford said his finger first started bothering him in the second quarter, but was manageable. He threw a 13-yard touchdown pass to Tyler Higbee late in the third quarter to give the Rams a 16-7 lead. Stafford hit DeSean Jackson for 68 yards earlier in the quarter on third-and-10 that led to Darrell Henderson’s 5-yard run that gave Los Angeles its first lead of the game.

Robert Woods had 12 catches for 150 yards and the Rams won their second straight in Seattle after last January’s playoff victory over the Seahawks.

"He was big when we were backed up, made some explosive plays," Stafford said about Woods. "He played great tonight."

The Rams finished with 476 yards of offense, the most they’ve amassed in their last 20 games since Week 3 vs Buffalo in 2020 when they had 478. It’s also their third-biggest offensive game in the last two calendar years since Week 5 at Seattle in 2019 when they posted 477 yards.

But Smith couldn’t lead a storybook final drive, with his first pass intercepted by Nick Scott as Tyler Lockett tripped making his break. Smith was 10 of 17 for 131 yards in the fourth quarter.

"I really thought we had a chance and I thought we were going to come back and get it done. Unfortunately, we didn’t," Smith said.

Smith was needed because Wilson’s fingers hit Aaron Donald’s arm on the follow through of a pass that nearly went for a touchdown but was slightly overthrown midway through the third quarter.

Wilson remained in for one more series and attempted one pass. He was sacked on third-and-5 by Donald, No. 88 1/2 of his career setting a new franchise record — although the Rams records don’t include Deacon Jones as sacks weren’t an official stat when he played. Wilson never took another snap and finished 11 of 16 for 152 yards, one touchdown and his first interception of the season.

"It felt good and it’s a blessing. It’s even better when you can accomplish something like that coming off a divisional win," Donald said of the record.

Smith entered with Seattle backed up at its own 2. Since arriving in Seattle at the start of the 2019 season, Smith had thrown a total of five passes, all of them coming in a blowout win over the Jets last season.

Seattle appeared to take a 14-3 lead at the end of the first half but a 15-yard touchdown pass to Lockett was called back on a holding penalty against Duane Brown. Jason Myers then missed a 35-yard field goal and the Seahawks had to settle for a 7-3 halftime advantage.

Rams CB Darious Williams suffered an ankle injury in the fourth quarter and did not return. ... Seattle played without starting RB Chris Carson due to a neck issue.

Seahawks: At Pittsburgh on Sunday, Oct. 17.