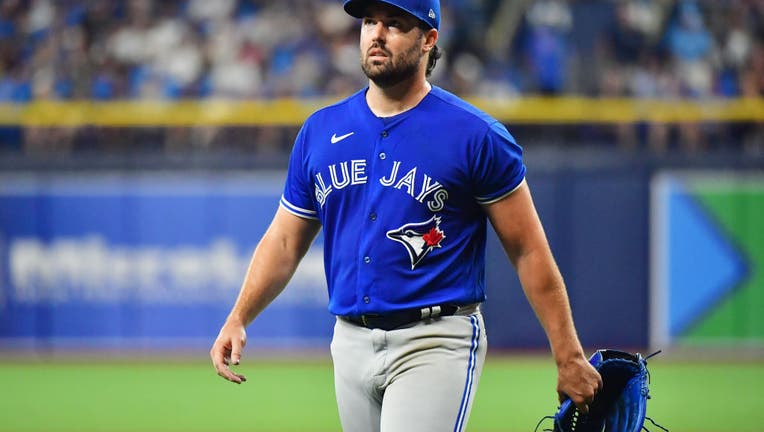 ST PETERSBURG, FLORIDA - SEPTEMBER 20: Robbie Ray #38 of the Toronto Blue Jays looks on after the fourth inning against the Tampa Bay Rays at Tropicana Field on September 20, 2021 in St Petersburg, Florida. (Photo by Julio Aguilar/Getty Images)

SEATTLE - The Seattle Mariners are finalizing a contract with American League Cy Young Award winner Robbie Ray, according to a person with knowledge of the deal.

The person spoke to The Associated Press on Monday on the condition of anonymity because Ray still must undergo a physical and the deal has not been signed. ESPN.com first reported the sides were finalizing an agreement, expected to be for $115 million over five years.

Ray is coming off the best season of his career with the Toronto Blue Jays, going 13-7 with a 2.84 ERA and 248 strikeouts in 193 1/3 innings. A left-handed power pitcher, Ray led the American League in ERA, games started, innings pitched and led all of baseball in strikeouts.

He immediately becomes the ace of the Seattle staff. The staff includes Marco Gonzales, Chris Flexen and Logan Gilbert under contract for the 2022 season for an ascending Mariners team that went 90-72 last season and barely missed snapping the club’s 20-year playoff drought.