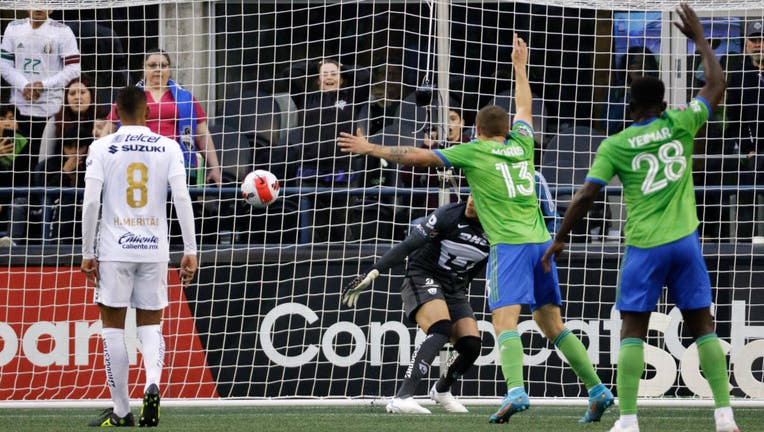 SEATTLE - Raúl Ruidíaz netted goals in the 45th and 80th minutes and Nicolás Lodeiro hammered home another as an exclamation point in the 88th as the Seattle Sounders earned a 3-0 victory over Pumas UNAM to win the CONCACAF Champions League title.

In front of a CONCACAF record 68,741 fans at Lumen Field on Wednesday night, the Sounders became the first MLS team to win the Champions League in its current form. The victory earns them a berth into the quarterfinals of the FIFA Club World Cup.

"I’m just so proud of that group of players, all of them," head coach Brian Schmetzer said. "Because it’s not just the guys that scored the goals tonight. And it’s not just the Yeimars (defensive back Yeimar Gómez Andrade) and Stefs (goalie Stefan Frei), those guys, but it’s all the young kids that are coming out. The academy guys, they all get a taste of what this club is all about.

"I’m just super, super proud of the way the team performed throughout this tournament. Under some adversity; it’s not an easy tournament to win. A lot of people were asking me about the subtle pressure about coming here to perform in front of a large crowd. I think they passed that test. They passed it with flying colors."

Ruidíaz's goal in the 45th minute on a deflected shot by goalkeeper Alfredo Talavera gave the Sounders the lead right before halftime. Albert Rusnák gained control of a blocked free kick and made a brilliant run into the box. Rusnák centered with a pass that was controlled by Xavier Arreaga and set back for Ruidíaz. His shot deflected off Diogo De Oliveira and by Alfredo Talavera to put the Sounders on top.

The Sounders needed a key save from Stefan Frei in the 65th minute to keep a 1-0 advantage. De Oliveira came flying into the box with a header attempt that Frei flailed and deflected wide of the net.

"I said to the guys before the game starter that the very first one, there's only one. And that's why it's history," Frei said. "Today was an opportunity to achieve that as well. The next 200 years there will be 200 other CONCACAF champions, but there will never be another first one (for MLS). So you truly write yourself in the history books that way."

Ruidíaz delivered the final blow after a beautiful march up field. Alex Roldan delivered a great pass up the right sideline that was run down by Jordan Morris. After closing on the box, Morris passed off to Nicolas Lodeiro, who then found Ruidíaz as he finished with a strike inside the left post.

Then with the victory in reach, the stadium filled with cell phone flashlights lit as the energy ramped to a new pitch in the stadium.

"I've never seen the stadium have the lights out, all the people with their cell phones, and I got a little choked up," Frei said. "I had to like tell myself that there's still some game left, like relax, OK, take it easy. But this is special. Very special. I mean as a little kid, this is what you dream of, you know."

Lodeiro then polished off the victory in style as he collected a Morris shot that deflected off the left post and put it into the back of the net to cap the 3-0 win. Lodeiro ripped his jersey off and ran to celebrate with fans in the south end zone, which earned him a yellow card in the process.

With a 2-2 draw in the first leg of the match last week in Mexico City, the 3-0 victory gave the Sounders a 5-2 win on aggregate.

The Sounders had to survive early injuries before putting the game away late.

Ricardo Galindo picked up a yellow card for Pumas after a collision with Nouhou Tolo along the left sideline. Tolo remained down on the sideline before attempting to play through the injury. But after another quick collision between João Paulo and Leonel López again halted play, Tolo required more attention and came off the field.

Paulo and López came together again in the 25th minute with Paulo requiring attention. López picked up a yellow card as well with Paulo needing a stretcher to return to the locker room.

Tolo was replaced in the lineup by Kelyn Rowe in the 11th minute with Obed Vargas coming on for Paulo in the 29th minute. Tolo sustained a thigh contusion. The Sounders are evaluating Paulo for a possible ACL tear in his right knee. Paulo was on crutches during the team's postgame celebrations.

Meanwhile, Rowe wasn't 100 percent either and said he probably shouldn't have been on the roster yet due to an injury he's been dealing with. However, he didn't want to pass up a chance to make a difference in a game like this.

"(Coach) goes ‘are you fine?’ I said yes. Was I lying? Probably a little bit. But it’s a moment that every athlete would want," Rowe said.

Jordan Morris had a look in the box in the 15th minute that was blocked. He then chipped a pass that was headed onto the goal by Ruidíaz with an easy stop from Talavera.

Pumas had their best early chance in the 32nd minute when Washington Corozo sliced into the box only to send the ball high above the net. Frei made another great stop of an apparent chance in the 44th minute from Juan Dinenno. However, the play was already blown dead due to a foul on Favio Alvarez.

After De Oliveira's chance in the 65th, Alex Roldan nearly extended the Sounders' advantage. Roldan picked off a throw from Talavera and found space in the box. His left-footed attempt was pushed wide by Talavera.

The Sounders advanced to the final with victories of FC Motagua (5-0 aggregate), Club León (4-1 aggregate), and NYC FC (4-2 aggregate). Nicolás Lodeiro converted a pair of penalty kicks in the second half of last week's first leg in Mexico City to manage a 2-2 draw in the initial meeting with Pumas. It meant all Seattle needed was a straight-up victory at home to win the cup.

The victory earns the Sounders a place in the quarterfinals of the FIFA Club World Cup. The Asian Football Confederation (AFC) and Confederation of African Football (CAF) also get a spot in the semifinals for their Champions League victors. The fourth quarterfinals entrant comes from a playoff between the Oceania Champions League victor and the champion club team from the host country of the FIFA Club World Cup.

The Sounders are the first MLS team to win the CONCACAF Champions League since it changed formats in 2008. Since the new format was introduced only Mexican teams had won the title. It was only the second time the Sounders had reached the semifinals of the tournament. The LA Galaxy were the last MLS team to win any iteration of the tournament with a 3-2 win over Olimpia of Honduras in 2000. 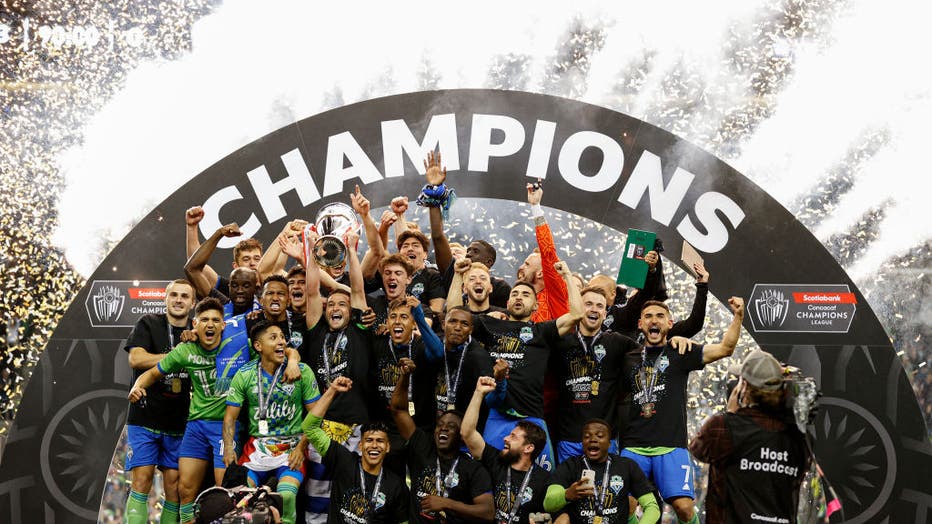 SEATTLE, WASHINGTON - MAY 04: The Seattle Sounders celebrate after beating Pumas 3-0 during 2022 Scotiabank Concacaf Champions League Final Leg 2 at Lumen Field on May 04, 2022 in Seattle, Washington. (Photo by Steph Chambers/Getty Images)