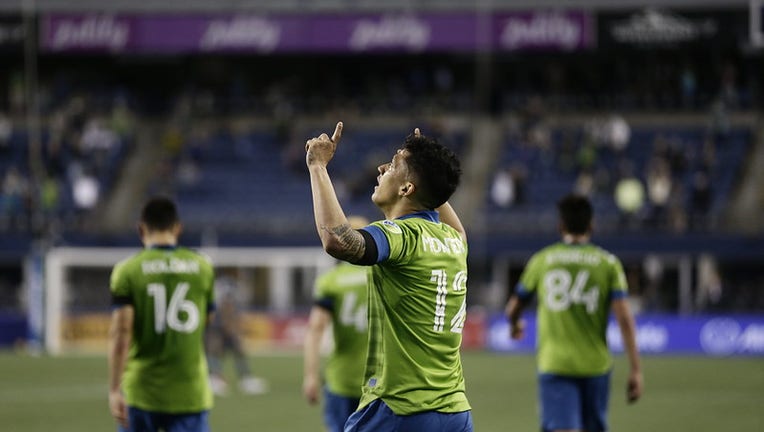 SEATTLE - João Paulo scored a goal of the season candidate early in the second half, Raul Ruidiaz added two goals three minutes apart, and the Seattle Sounders welcomed fans back to its home stadium with a 4-0 win over Minnesota United on Friday night.

The start to the 2021 season for the reigning Western Conference champions was a rousing celebration welcoming fans back to Lumen Field for the first time in 13 months with a foursome of masterful goals in a game that was otherwise choppy and at times sloppy.

Just A Bit Outside April 15

João Paulo ignited the cheers with a deft moment of skill, scoring on a 25-yard volley in the 49th minute to give Seattle the lead. Ruidiaz scored his first in the 70th minute off a terrific pass by Will Bruin and moments later collected a second goal after Cristian Roldan found Ruidiaz with a step behind the Loons defense.

Fredy Montero, playing his first game for Seattle since 2012, added the final goal in the 86th minute. Montero, who scored the first goal in franchise history for Seattle, netted his 48th career regular-season goal for the Sounders and first since Oct. 7, 2012.

The crowd of 7,042 wasn’t the nearly 40,000 that has become the norm in Seattle, but was a sellout under the current COVID-19 restrictions. They boomed and clapped as the teams took the field. They sang and chanted, booed loudly at any call made by referee Joe Dickerson and exploded with excitement at João Paulo finding the back of the net for the first goal of the season.

Even with  he limited attendance, it was a marked change in atmosphere from last December when Seattle rallied for three goals in the final 15 minutes plus stoppage time for a 3-2 win in the Western Conference final. After that goal, the only noise inside the stadium was the screams of Sounders players following Gustav Svensson’s stoppage time winner.

Seattle hadn’t played in front of its home fans since March 7, 2020, when an announced crowd of 33,080 showed up for the second match of the regular season against Columbus. That match was played at the start of the pandemic when the Seattle region appeared to be the epicenter of the outbreak in the U.S.

More than a year later, some of those seats were again occupied.

Minnesota United should be a contender in the Western Conference, but was badly overrun by Seattle. Robin Lod missed on a pair of good scoring chances, and Roldan cleared a header off the goal line early in the second half to help keep the Loons off the board.