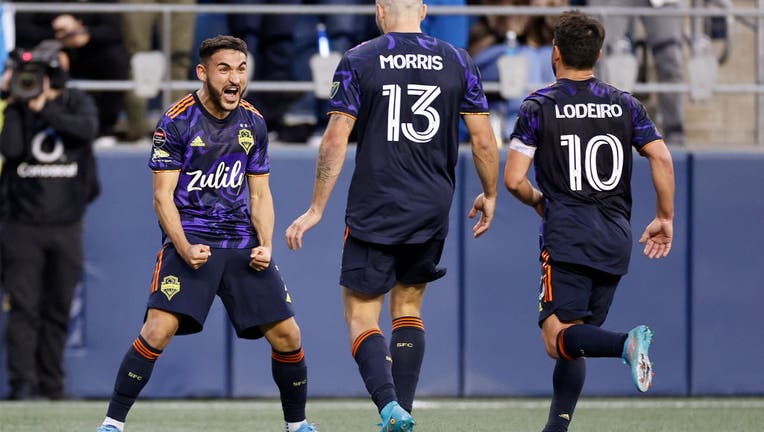 SEATTLE, WASHINGTON - APRIL 06: Jordan Morris #13 of Seattle Sounders celebrates a goal with Cristian Roldan #7 and Nicolás Lodeiro #10 against New York City FC during the first half during the CONCACAF Champions League Semifinals at Lumen Field on A

SEATTLE - Albert Rusnák and Jordan Morris scored in the first half, Nicolás Lodeiro converted a penalty kick midway through the second half, and the Seattle Sounders beat New York City FC 3-1 on Wednesday night in the first-leg of the CONCACAF Champions League semifinals.

The two-game, aggregate-goal series saw the Sounders take a comfortable advantage, but Seattle also allowed a key road goal to NYCFC’s Thiago Andrade in the first half that could serve as a tiebreaker in next week’s second-leg played at Red Bull Arena in Harrison, N.J.

Rusnák’s goal came in the 16th minute and was his first since signing with Seattle in the offseason. Morris made it 2-1 later in the first half and Lodeiro’s penalty kick in the 68th minute came after a video review that showed Raúl Ruidíaz being fouled in the penalty area by Thiago Martins.

The matchup between Seattle and NYCFC, the reigning MLS Cup champions, is the first time two MLS teams have faced off in the semifinals of the Champions League. The winner will meet either Pumas or Cruz Azul from LigaMX in the two-game, home-and-home final. Pumas holds a 2-1 lead after the first leg played Tuesday night in Mexico City.

Four MLS teams have previously reached the Champions League final since the current format was adopted in 2008 — Real Salt Lake (2011), CF Montreal (2015), Toronto FC (2018) and LAFC (2020) — but none have come away with the title. Seattle will have the advantage at joining that foursome of MLS teams headed into next week’s second-leg.

The Sounders have vocalized for years their desire to be the first MLS team to win the Champions League and their impressive performances in the knockout stage this season have reinforced that belief. Seattle has outscored its opponents 12-2 through five CCL games this season.

Rusnák’s first goal for Seattle was set up by the combo of Cristian Roldan and Morris. Roldan also assisted on Morris’ goal in the 35th minute, drawing the pass from the end line back to the penalty spot where Morris finished into the upper corner past NYCFC goalkeeper Sean Johnson.

Despite Seattle’s convincing victory, Andrade’s goal was important for NYCFC as a 2-0 win in the second-leg would send the MLS champs through due to the road goals tiebreaker. It was NYCFC’s first semifinal match in the Champions League having never advanced past the quarterfinals previously.

SEATTLE, WASHINGTON - APRIL 06: Jordan Morris #13 of Seattle Sounders celebrates his goal against New York City FC during the first half during the CONCACAF Champions League Semifinals at Lumen Field on April 06, 2022 in Seattle, Washington. (Photo by Steph Chambers/Getty Images)