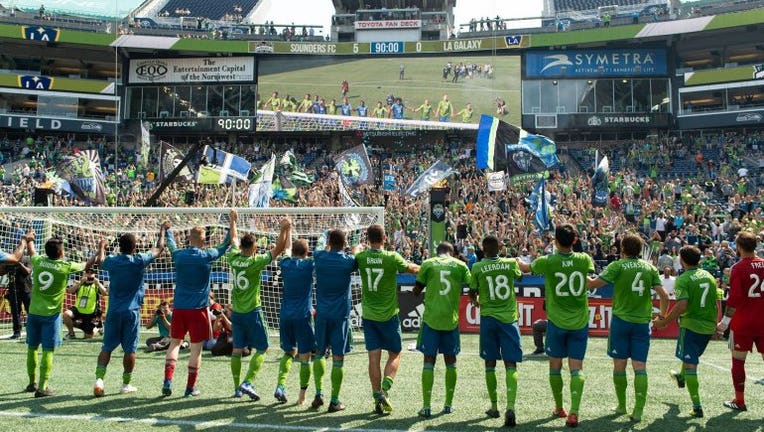 SEATTLE -- Harry Shipp isn't quite ready to say the Seattle Sounders have turned a corner. On Saturday, he did his part to help them get closer to turning it.

Shipp had a goal and an assist and the Sounders rolled past the depleted Los Angeles Galaxy 5-0 for their club-record sixth straight victory.

Chad Marshall, Cristian Roldan and Raul Ruidiaz also scored, and the Sounders were the beneficiary of an own goal.

Seattle (10-9-5) is 7-0-2 in its last nine games, tying the second-longest undefeated string in club history. After languishing near the bottom of the standings all season, it is now well in reach of a postseason berth with 10 games left.

"We've had a run of very good games, but we're not going to view it like that," Shipp said. "We're not going to get complacent. The confidence is there. We're trying to fight for as high a playoff seed as possible. For us, we've done a pretty good job the past two months of doing that."

Ibrahimovic indicated earlier in the week that he did not want to play on Seattle's turf and risk re-injuring his knee, so did not make the trip. Giovani dos Santos (leg), Jonathan dos Santos (groin), and Alessandrini (knee) all were out with injuries. Starting defender Michael Ciani (hamstring) also was sidelined.

But Galaxy coach Sigi Schmid, back where he guided the Sounders from their inception in 2009 until getting let go in July 2016, wasn't using their absences as an excuse.

"We play with the players who are here and we're not going to talk about the other guys," Schmid said. "There's not much you can say - it was an embarrassing game for us. We gifted them three goals. I thought the first three goals were gifts from us and even the last one was another gift.

"You just can't do that against a good team and expect to get a result."

Marshall scored late in the third minute for his third of the year and Seattle's quickest goal of the season, as he headed in a curling target ball from Nicolas Lodeiro.

Shipp's third of the year made it 2-0 in the 18th minute. Galaxy defender gave the ball away to Seattle's Gustav Svensson deep in Los Angeles' half. Svensson found Shipp breaking toward the top of the penalty area, sent the ball ahead, and Shipp buried it from 17 yards straight in front.

"We haven't had a ton of super-easy goals, so it was good to have some time and space to know where I wanted to place it," Shipp said.

An own goal off the foot of Servando Carrasco pushed the lead to 3-0 in the 50th minute. Roldan scored in the 59th for his third of the year, and Ruidiaz finished the rout in the 67th with his second.

"I thought that was a well-deserved two goals," he said of the first-half tallies. "Our team has started strong in the first 20 or 25 minutes of games recently. But then we let our foot off the gas and let them back in. So we made a couple corrections at halftime. The team did what they were supposed to do and did what they had to do to put the game out of reach."