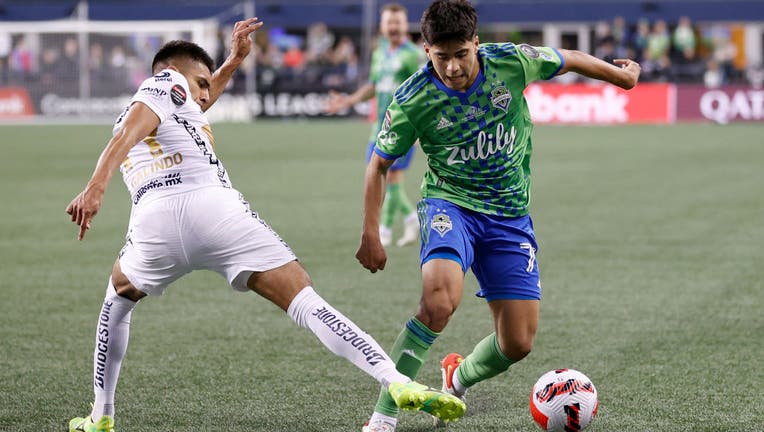 SEATTLE, WASHINGTON - MAY 04: Ricardo Galindo of Pumas and Obed Vargas #73 of Seattle Sounders battle for the ball in the second half during 2022 Scotiabank Concacaf Champions League Final Leg 2 at Lumen Field on May 04, 2022 in Seattle, Washington.

Seattle Sounders midfielder Obed Vargas will miss several weeks of action due to a stress fracture in his back, head coach Brian Schmetzer said on Thursday.

"It’s not a great injury," Schmetzer said. "We're talking about multiple weeks, he'll be out seeing a back specialist every couple of weeks, but this is going to need time to heal. So it's really unfortunate because the kid was playing well for us and then also had a chance to be with the U-20's.

Schmetzer said the issue had caused some ongoing discomfort for Vargas in recent weeks before becoming more pronounced after Saturday's 1-1 draw against LAFC.

"There was not one specific episode where it happened. It was just an accumulation and I've asked our guys and the back specialists to give us ideas of how we can prevent something like that happening again. He is a young kid, lot of stress on his body, lot of games. So, it happened."

Vargas, 16, has filled a big role for the Sounders following the loss of João Paulo to a torn ACL in their CONCACAF Champions' League final over Pumas UNAM. Despite his young age, Vargas has played in 13 games for the Sounders this season with 10 starts in MLS play.

"It’s tough, but the fact of the matter is we've got a deep team," Schmetzer said. "[Vargas] covered for J.P. We have Josh [Atencio] coming back, Danny [Leyva], Kelyn [Rowe] can fit in there, so the team will be fine. It’s a bummer for the kid cause the kid was looking pretty good."