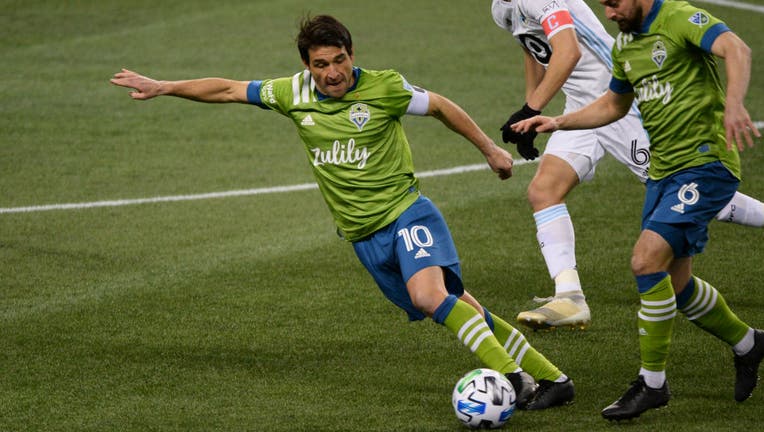 SEATTLE, WA - DECEMBER 07: Seattle Sounders midfielder Nicolas Lodeiro (10) pushes the ball up the field during a Western Conference MLS Final between the Seattle Sounders and Minnesota United on December 7, 2020 at Lumen Field in Seattle, WA. (Photo

SEATTLE - The Seattle Sounders have locked in their captain for several more seasons. They seem to be on the verge of doing the same for their head coach.

The Sounders signed midfielder Nicolas Lodeiro to a new contract that keeps him tied to the club through the 2023 season. Lodeiro’s previous deal was set to expire after the 2021 season.

“He’s been the cornerstone of our franchise since 2016,” general manager Garth Lagerwey said Wednesday. “Everything is built around him. I thought he had another fantastic season. So we are super excited and grateful to have Nico back for three more years.”

Lodeiro has been key to Seattle’s run of success over the past five seasons as the Sounders have reached the MLS Cup final four times and won two titles. The energetic midfielder has appeared in 121 regular season matches for the Sounders with 33 goals and 40 assists.

This year, Lodeiro finished third in the league MVP voting after having seven goals and six assists during the truncated MLS regular season. He had one goal and two assists in the playoffs.

Lodeiro will occupy one of Seattle’s designated player slots during the life of his contract.

“He has been the best player on our team,” Lagerwey said. “I think he’s arguably already the best Sounder ever if you look at the team’s performance since his signing in 2016 -- four finals in five years, two titles.”

While Lodeiro is locked up, the wait continues on a new deal for coach Brian Schmetzer. Schmetzer’s current contract expired at the conclusion of the season and conversations have been ongoing about a new deal.

Supporting the Sounders during their Championship run in a pandemic

Schmetzer and Lagerwey said they remain optimistic about an agreement.

“We want to bring Brian and the staff back. We’ve said that for months,” Lagerwey said. “I spoke with Brian’s representative multiple times yesterday, and certainly in the run up during the playoffs as well. So we’re working on it. Hopefully, we’ll get there.”

“I’m hopeful that we can get something done. I think it is something that both sides are willing to try and make a push to get it done,” Schmetzer said. “It is getting a little late in the year but I think everybody’s got the same goals in mind to try and push it over the finish line.”