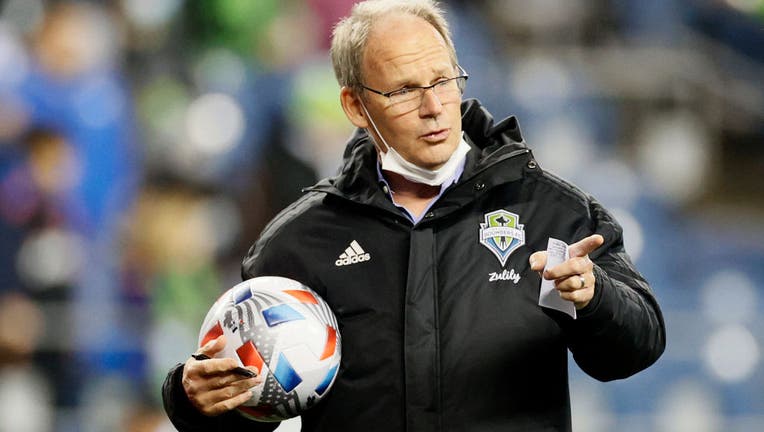 SEATTLE, WASHINGTON - NOVEMBER 01: Head coach Brian Schmetzer of Seattle Sounders looks on before the game against the Los Angeles FC at Lumen Field on November 01, 2021 in Seattle, Washington. (Photo by Steph Chambers/Getty Images)

Seattle Sounders head coach Brian Schmetzer's status for Saturday's Cascadia Cup matchup with the Portland Timbers is in doubt as he has been placed in the MLS' health and safety protocols.

Sounders vice president of soccer and sporting director Craig Waibel said after practice on Wednesday that Schmetzer had been placed in the league's health and safety protocols.

"He's working with the doctors. Everything is fine and he's just operating under the protocols as we always have," Waibel said.

Schmetzer confirmed his positive status in an interview with Sports Radio 93.3 KJR on Wednesday evening.

"I'm now one of the millions of other Americans that has COVID," Schmetzer said.

"I'm super glad that I was triple vaccinated. COVID is coming back now. There's a lot more cases so we still need to be aware of it. I know a lot of people are tired of it but we still need to be careful. I'm trying to be careful around my wife, around my family, stuff like that. … My case has been very mild so I'm very happy that I was vaccinated. And now I'm in the Sounders- and league-mandated protocol and I think I have a good chance of being out there Saturday, but we just have to follow the protocol."

Schmetzer was in attendance for the team's practice on Wednesday, tough he watched from the sidelines while wearing a mask. Both Waibel and Schmetzer believed he still had a chance to be on hand for Saturday's game against the Timbers.

"There's a time limit of when my first symptoms were there and then there's additional testing. Our doctors are way on top of it and it's going to be fine. I have complete faith in our medical staff and they will let me know," Schmetzer said.

It's the first meeting between Portland and Seattle this season with the return trip against Timbers coming August 26 at Providence Park. The Sounders beat the Vancouver Whitecaps 4-0 three weeks ago in the first meeting of the year between the three Pacific Northwest rivals.

The Sounders are set to unveil a new banner for their 2022 Concacaf Champions League title in the rafters of Lumen Field prior to the match Saturday against the Timbers.