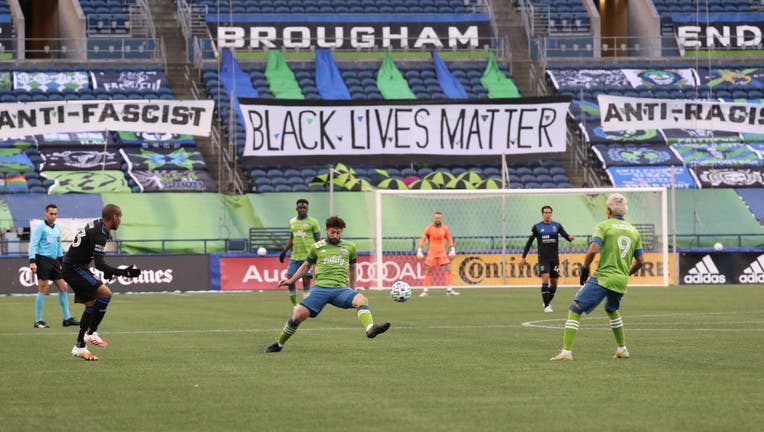 SEATTLE, WASHINGTON - NOVEMBER 08: Joao Paulo #6 of Seattle Sounders reached for possession of the ball in the first half against the San Jose Earthquakes at CenturyLink Field on November 08, 2020 in Seattle, Washington. (Photo by Abbie Parr/Getty Im

Nicolas Lodeiro and Raul Ruidiaz scored two minutes apart early in the second half, and the Seattle Sounders beat the San Jose Earthquakes 4-1 on Sunday in the MLS regular season finale for both teams.

Seattle’s victory combined with Portland’s draw against LAFC vaulted the Sounders (11-5-6, 39 points) into second place in the final Western Conference standings. Seattle will face No. 7 seed LAFC in the opening round of the MLS Cup playoffs later this month in a rematch of last year’s Western Conference final.

After a scoreless first half, Lodeiro found himself free off a scramble inside the penalty area and his left-footed shot beat JT Marcinkowski in the 52nd minute.

Moments later, Ruidiaz’s deflected shot from the top of the penalty area beat Marcinkowski for a 2-0 Seattle lead. It was the 12th goal of the season for Ruidiaz.

Marcos López scored in the 57th minute for San Jose (8-9-6, 30 points) on a curling free kick near the end line. But Jordan Morris restored the two-goal advantage pouncing on a defensive mistake by the Earthquakes and scoring in the 74th minute. It was Morris’ 10th goal of the season.

Seattle added an own goal late in the match for the final margin.

San Jose had already clinched a playoff spot and needed a victory and a lot of help to avoid being the No. 8 seed. The Earthquakes will open the playoffs against No. 1 seed Sporting Kansas City.