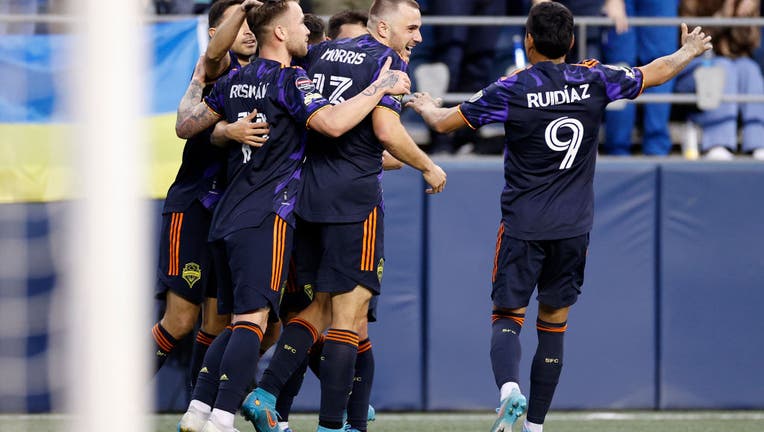 SEATTLE, WASHINGTON - APRIL 06: Jordan Morris #13 of Seattle Sounders celebrates his goal against New York City FC during the first half during the CONCACAF Champions League Semifinals at Lumen Field on April 06, 2022 in Seattle, Washington. (Photo b

The Seattle Sounders FC will have a chance to win the Concacaf Champions League Final for the best soccer team in North America, following a 1-1 draw with New York City FC in Wednesday night’s second leg of the semifinals.

The Sounders entered the game against New York City FC Wednesday night with a 3-1 lead after the first leg of the 2022 Scotiabank Concacaf Champions League Semifinals, and they held on for a 1-1 draw. This brought the final score, on aggregate, to 4-2. Now the Sounders are set to face Liga MX side Pumas UNAM, a team from Mexico, in a battle for the SCCL championship. This is the first time Sounders FC has advanced to the continental championship, and the club is just the fifth MLS team to reach the finals.

Tickets are on sale today. Season ticket holders can access a special pre-sale window to purchase tickets from 9:00 a.m. to 3:00 p.m., the general public can purchase tickets starting at 3:00 p.m. Click here to order your tickets.

Commentary: Sounders FC are closer than you might think from facing a world powerhouse

The club has announced that they will now have to reschedule its MLS match against the Vancouver Whitecaps FC. The game was previously set for Saturday, April 30 at Lumen Field, now the game will be played on Tuesday, June 14.

Albert Rusnák and Jordan Morris scored in the first half, Nicolás Lodeiro converted a penalty kick midway through the second half, and the Seattle Sounders beat New York City FC 3-1 on Wednesday night in the first-leg of the CONCACAF Champions League semifinals.