The Seattle Sounders FC announced its plans on Wednesday to build a new training facility on the site of the former Longacres racetrack in Renton.

RENTON, Wash. - The Seattle Sounders FC announced its plans on Wednesday to build a new training facility on the site of the former Longacres racetrack in Renton.

"Welcome to the future home of Sounders FC. Welcome to Sounders Center at Longacres," Hanuaer said in his opening comments.

"We are just thrilled to plant our flag on this site for the next generation of Sounders' staff, players, coaches and fans."

The Sounders have trained at the Starfire Sports Complex in Tukwila since they joined the MLS in 2009. Starfire has also served as the host site for several matches in U.S. Open Cup play. The new training site will be less than a mile away from their previous home.

The new facility is set to open for the club in 2024 as part of the club's 50th anniversary season. The complex will include two natural grass practice fields and two artificial turf fields with the possibility of a fifth field as well, per Hanauer. While the MLS version of the Sounders have only been in existence since 2009, the original Sounders were formed in 1974 and played as a part of the North American Soccer League until 1983.

A 303,000 square-foot building already exists on the site that the club will take over with a renovation of 41,300 square-feet across two floors to accommodate the needs for the club. The site will serve as the team's headquarters in addition to fulfilling its training needs.

Hanauer wouldn't state specific figures but said the investment for the club in the new site was substantial.

"I don't think I'm going way out of bounds by saying it is in the tens of millions of dollars to do a project like this," he said. "But we're not going to pick a number and brag about it or let everyone know."

Carner said that they intend to build up to 3,000 mutli-family housing units on their remaining land holdings at the site and create a mixed-use development for the area.

"This is going to be a truly unique opportunity and we couldn't be more pleased to have them as a partner as we figure out and plan for the site's future," Carner said.

Seattle Sounders FC and adidas on Tuesday revealed a new primary kit, Legacy Green, for the 2022 and 2023 seasons.

Carner said that discussions about the site as a potential home for the Sounders began about six months ago, even before Unico Properties LLC completed their purchase of the site from Boeing. Hanauer said they began looking into sites for a new complex three years ago with plans ultimately stalled because of the COVID-19 pandemic.

Hanauer said they brought representatives of FIFA, the governing body of soccer, on a visit to the site in the fall as part of their desire to be one of the host venues for the 2026 World Cup, which will be held jointly in the United States, Canada and Mexico. He said that both this new site and their current home at Starfire could serve as training sites for teams participating in the World Cup.

"We brought them on a stealth tour of the facility," Hanuaer said. "So they have seen the plans. They know that this could potentially be a training facility [for the World Cup]." 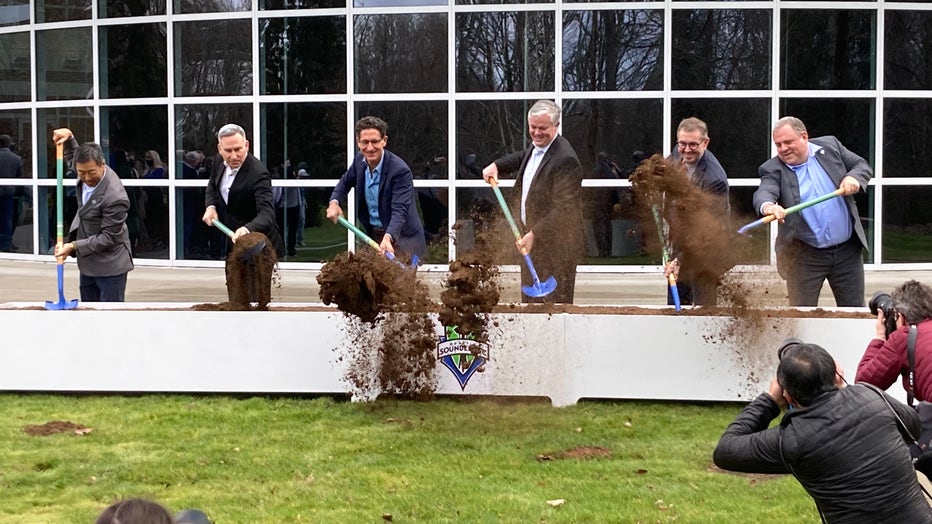 Lagerwey said the new complex could also serve as a host site for U.S. Open Cup matches and the Tacoma Defiance, which is the Sounders' reserve and development team.

"This is an amazing development for the franchise and it's an amazing step forward and we just couldn't be more excited to get going. 2024 can't come soon enough," Lagerwey said.

Longacres served as the region's primary horseracing venue for nearly 60 years before closing in 1992. Emerald Downs opened as the new racetrack for the region in Auburn in 1996.