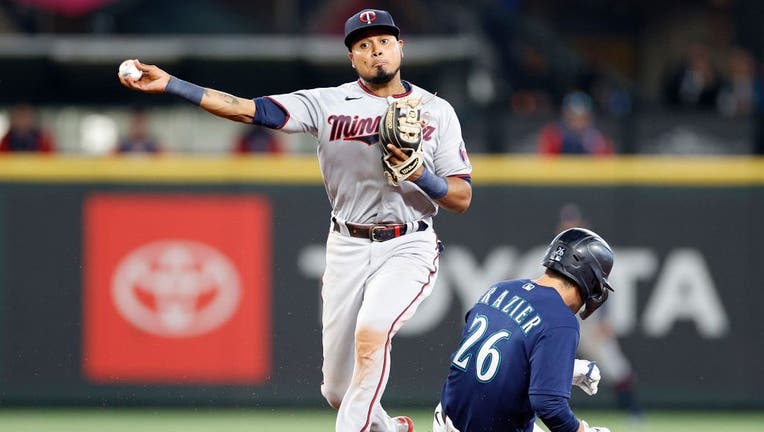 SEATTLE, WASHINGTON - JUNE 15: Luis Arraez #2 of the Minnesota Twins turns a double play over Adam Frazier #26 of the Seattle Mariners during the eighth inning at T-Mobile Park on June 15, 2022 in Seattle, Washington. (Photo by Steph Chambers/Getty I

SEATTLE - Ryan Jeffers hit an RBI single off the center-field wall to break a scoreless tie in the seventh inning and the Minnesota Twins went on to beat the Seattle Mariners 5-0 on Wednesday.

"Sonny Gray, excellent. We’re glad to have him back," Minnesota manager Rocco Baldelli said. "He, honest-to-god in a lot of ways, looked like he hadn’t missed really any time."

Five Twins relievers then completed the combined five-hitter. Griffin Jax (4-0) followed Gray and struck out two in the sixth inning.

Minnesota clinched its first series victory over the Mariners since 2019.

The Twins offense did finally break through in the seventh against Mariners starter Marco Gonzales (3-7), who allowed one run and three hits in 6 ⅔ innings.

Gary Sanchez singled with one out in the Minnesota seventh and Luis Arraez walked. Jose Miranda followed with a grounder and beat the double-play relay to keep the inning going.

"I thought Marco was outstanding," Seattle manager Scott Servais said. "Really bouncing back from a rough start last time out. Really dominated the strike zone, had a really good changeup going. He ran into a little bit of trouble in the seventh, and we couldn’t stop the bleeding."

Reliever Paul Sewald came with two outs in the seventh to face Jeffers, who had doubled earlier. This time, he hit a long single off the wall for a 1-0 lead.

"I’m really trying to do what I did in 2019," Jeffers said. "I hit the ball really well that year. What I’m not hitting well now, I hit well. We are really trying to get back to that, and I think we’re really close."

Arraez, who began the game with an MLB-best .354 batting average, hit a two-run single during a three-run eighth.

Minnesota’s final run came in the ninth when Jeffers scored on a ground ball to make it a five-run game.

Twins reliever Jharel Cotton allowed the first two batters to reach base in the ninth before retiring Jesse Winker, Dylan Moore and Luis Torrens to end the game.

The Mariners finished the game 0 for 10 with runners in scoring position.

Twins: Baldelli said INF Jorge Polanco (back) underwent an MRI, which revealed no significant differences from a previous MRI he took back in October. Polanco is still feeling some back tightness, which caused him to leave Sunday’s game early and miss each of the past three contests.

Mariners: SS J.P. Crawford (sickness) missed a second straight start due to flu-like symptoms. ... OF Kyle Lewis (concussion) has ramped up his baseball activities is showing improvement, but is still a ways away from returning to the lineup … C Tom Murphy (shoulder) is starting to do work in the batting cage, including batting and catching balls from the machine, as he works his way back from a torn labrum.

Twins: Off Thursday, then start a three-game series at Arizona. Devin Smeltzer (3-0, 2.38 ERA) will start for Minnesota against the Diamondbacks’ Madison Bumgarner (2-6, 3.50).