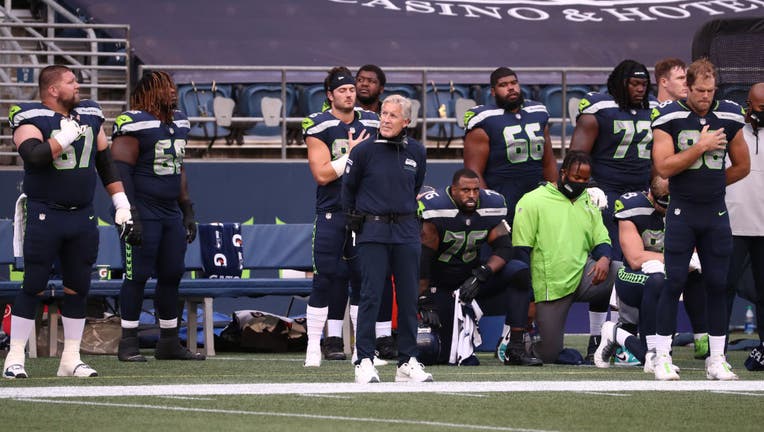 SEATTLE, WASHINGTON - SEPTEMBER 20: Seattle Seahawks coaches and players stand or kneel during the national anthem before the game against the New England Patriots at CenturyLink Field on September 20, 2020 in Seattle, Washington. (Photo by Abbie Par

SEATTLE - After a hefty fine from the NFL on Monday, Seahawks Head Coach Pete Carroll apologized for the face mask violation during Sunday night's game against the New England Patriots.

On Tuesday, Carroll told Seahawks.com reporter John Boyle he was disappointed in himself, not the NFL, for the mask violation and not doing a better job abiding by the policy, even after a fellow coach reminded him to wear the mask throughout the entire game.

"I had a coach who was reminding me about it throughout the game, (running backs coach) Chad Morton was on my ass the whole night. He was reminding me the whole time," Carroll said in an interview with Boyle. "I even changed masks at halftime to find one that worked better. Sometimes you've got to get coached up. Sometimes you have to admit that, that you screwed up and have got to do better."

Carroll said he recognizes the importance of the masks and sometimes, even coaches need to be "coached up."

Carroll was fined by the league $100,000 for not wearing a mask on the sidelines, and the team is facing an additional $250,000 fine for the offense.

According to ESPN's Adam Schefter, Carroll, San Francisco 49ers coach Kyle Shanahan, and Denver Broncos coach Vic Fangio will be fined $100,000 each for not properly wearing a face mask.

More fines could be coming as several other coaches violated the league’s rules requiring coaches to wear coverings over their mouths and noses at all times. Players are exempt from these protocols.

Sources also told ESPN each team will be fined an additional $250,000, totaling nearly $1.05 million in fines for all three teams.

Among the violators were Patriots coach Bill Belichick and both coaches in Monday night’s game, Jon Gruden of the Raiders and Sean Payton of the Saints.

Gruden wore his face mask like a chin strap and Payton wore his gaiter like a turtleneck.

The punishments come a week after the NFL warned all 32 teams in a memo about following the rules for wearing face coverings during the coronavirus pandemic lest they put the NFL season at risk.

If the fines, which were earlier reported by ESPN and NFL Network, prove ineffective, the league could hand out stronger discipline.