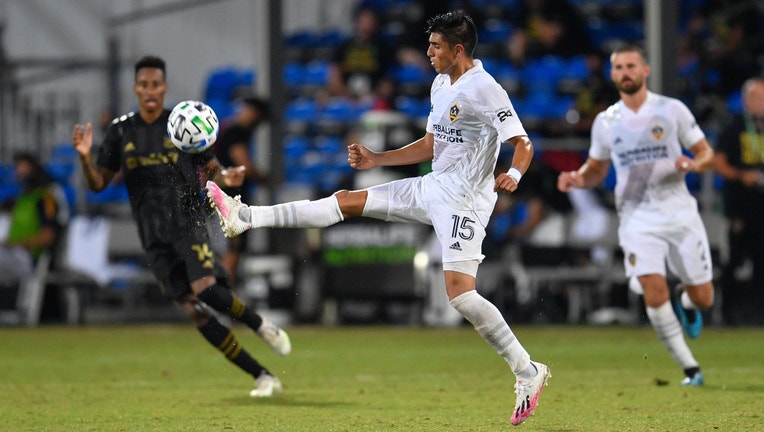 Joe Corona #15 of LA Galaxy plays the ball out of the air during a game between Los Angeles Galaxy and Los Angeles FC at ESPN Wide World of Sports on July 18, 2020 in Lake Buena Vista, Florida. (Photo by Roy K. Miller/ISI Photos/Getty Images).

After a hugely successful MLS Is Back Tournament that saw Major League Soccer restart its season in a “bubble” in Orlando, the 25th season of North America’s top-flight soccer league has now resumed in home stadiums. While the majority of games won’t see any fans in attendance, it does look and feel one step closer to normality to see the teams in familiar settings, and there’s now a pathway towards the playoffs and MLS Cup 2020—live on FOX Sports—in December.

Beyond the still-stringent medical protocols to keep players and staff safe and healthy, and beyond the breakneck pace at which teams are trying to catch up on all the games missed since the league shut down in March, it’s now less about who can shake off rust and adjust to the “new normal”, rather than who can find their form and start building their record toward the postseason. And this particular weekend sees some of the best rivalries MLS has to offer taking center stage on FOX Sports.

Even though this is one of the newest rivalries in MLS (the Galaxy are league originals since 1996 and have won the most MLS Cups in league history, while LAFC have just come on the scene as an expansion team in 2018), “El Trafico” has captured the attention not just of Southern California sports fans, but of soccer fans across North America and beyond. Including LAFC’s 6-2 win at MLS Is Back, these teams have scored a combined 40 goals in their seven prior meetings, an average of almost 6 per game!

While the early days of the rivalry were controlled by the Galaxy, and specifically Zlatan Ibrahimovic, LAFC have turned the tables: their 5-3 win in last year’s playoffs was their first in the series, and was followed up with that 6-2 whooping in Orlando. Remarkably, LAFC scored those six goals without reigning league MVP Carlos Vela, who sat out MLS Is Back to be with his pregnant wife; Vela is back, and with Galaxy star Chicharito still nursing a calf injury that kept him out last month, the odds are stacked against the Galaxy on Saturday.

This is The Great American Soccer Rivalry: pro soccer teams by these names have been battling almost 100 times since 1975, in the NASL, USL, US Open Cup, and now MLS. In fact, since the Timbers joined the Sounders in MLS in their expansion year of 2011, these two rivals have played to a virtual standstill: Seattle has won 14, Portland 13, with six draws. Last year, both games were won by the away team, and they’ll be playing each other home-and-away in the span of just a few weeks this time around.

Both teams feature some of the best attacking stars in MLS: the Timbers have former MVP Diego Valeri, MLS Is Back MVP Sebastian Blanco, and rising American star Jeremy Ebobisse up front; the Sounders counter with club-record set-up man Nico Lodeiro, US National Team star Jordan Morris, and forward Raul Ruidiaz, who has scored in each of the last four games in the series. The Timbers are riding a high from winning the MLS Is Back Tournament, and while the Sounders didn’t look like defending MLS Cup Champions in Orlando, no one would bet against them knocking their rivals down off that perch Sunday night.

These two Texas rivals battle yearly for possession of El Capitan, a replica 18th-century howitzer cannon; you would expect with a prize like that at stake this would be an explosive rivalry, and you’d be right. Since the Dynamo came into being in 2006, there have been stompings both figurative (Dallas’ 5-1 win in their last meeting a year ago was their biggest ever) and literal (Houston’s Ricard Clark earning the then-longest suspension in league history with his 2007 kick out at Dallas agitator Carlos Ruiz).

Both teams come into this 42nd all-time meeting with odd momentum: Dallas was withdrawn from MLS Is Back due to a rash of positive CoVID-19 tests, and finally restarted their season last week with back-to-back games at home against Nashville. Houston, meanwhile, is attempting to get momentum under new coach Tab Ramos, but went out of the MLS Is Back group stage thanks to a 90th-minute penalty kick goal by the LA Galaxy. But all that recent history will be forgotten for whoever can get a first hand of 2020 on El Capitan Friday night.

The first-ever meeting between these two now-rivals was as dramatic as they come: the opening game of the MLS Is Back Tournament in July began with an emotional demonstration by the over 170 members of the MLS Black Players for Change coalition, and ended with Orlando coming from behind to win 2-1 on star Nani’s 97th-minute goal. That was just the start for The Lions: under new coach Oscar Pareja, they surprised everyone with a run to the final on their “home fields”, missing out narrowly to the Portland Timbers ten days ago. That’s set the stage for what Orlando are hoping is a first-ever playoff appearance in their fifth year in the league.

Miami, meanwhile, is still looking for their first-ever win: coach Diego Alonso’s men have lost all five games of their (brief, and interrupted) expansion season. But this is their first game at their temporary home stadium in Ft Lauderdale—which was supposed to be christened the weekend the league shut down in March—and they’ve been boosted this week by the eye-opening signing of French midfielder Blaise Matuidi, who has not only won league titles with Paris Saint-Germain and Juventus, but oh-by-the-way was a starter as France won the FIFA World Cup two summers ago. No better time than a first-ever home game, against their in-state rivals, for Miami’s first MLS win.