The Seattle Seahawks and Seattle Kraken both announced Tuesday that fans will need to be fully vaccinated to attend games. Seahawks fans can also present a negative COVID-19 test taken within 72 hours of kickoff.

SANTA CLARA, Calif. - After nearly a decade run where they finished near the top of the NFC West standings each year and were almost always a contender in the NFC, the Seattle Seahawks find themselves in an unusual spot early this season.

With back-to-back losses to Tennessee and Minnesota, the Seahawks (1-2) head into a division showdown at San Francisco (2-1) on Sunday looking up at all three of their rivals in the NFC West.

Seattle hasn’t lost three straight games in a season or began the year 1-3 since coach Pete Carroll’s second season in 2011, the year before quarterback Russell Wilson arrived and launched a nine-year run of at least nine wins each season that’s tied for the longest streak ever of that kind.

"It’s real serious," Carroll said. "They want this to go the way our expectations are designed. That means we have to play better and everybody knows that. ... There is a little bit of a different feel about it. They want to prove it; they want to prove that we are on the right track and that we are going to win a bunch of different games."

The Seahawks have little time to get things fixed with a pair of division showdowns in a five-day span starting with the visit to the 49ers.

Seattle then hosts the Rams on Thursday night and could be in a big hole if things don’t change soon.

"The vibe is different because it’s been a long time since we’ve lost two in a row," said linebacker Bobby Wagner, who arrived with Wilson in 2012. 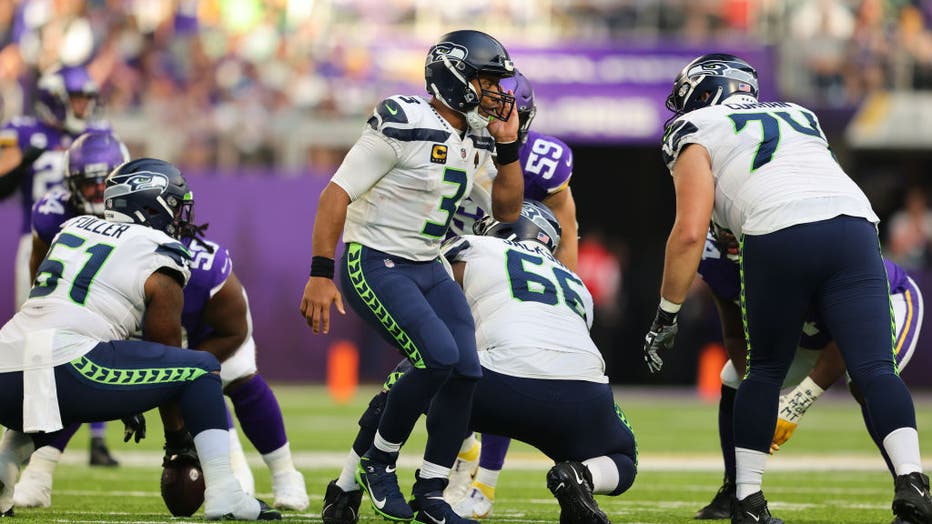 MINNEAPOLIS, MINNESOTA - SEPTEMBER 26: Russell Wilson #3 of the Seattle Seahawks calls a play at the line during the second half in the game against the Minnesota Vikings at U.S. Bank Stadium on September 26, 2021 in Minneapolis, Minnesota. (Photo by

"Going into two divisional games, a short week after this game, you want to make sure you put your best foot forward."

Despite Seattle’s early season struggles, 49ers coach Kyle Shanahan sees the same style of team that has tormented him in his first four seasons in San Francisco.

The Seahawks have won six of eight games against the Niners since Shanahan arrived in 2017.

"I know they’re 1-2, which isn’t what they’re used to, and I know their defense’s numbers aren’t very good, but that won’t be the case at the end of the year," he said. "They’ve got some really good players. They’ve got really good coaches."

It’s been a maddening level of inconsistency for Seattle’s offense, being unable to counter the defensive adjustments of its opponents at halftime and sustain scoring drives in the second half.

"It’s a matter of us executing our game plan," receiver DK Metcalf said.

The 49ers have scored just once in the opening quarter all season on a pass from Trey Lance to Trent Sherfield in the opener against Detroit. San Francisco has been outgained by more than 100 yards in the first quarter of each of the past two games and ranks 31st in yards (98) and 28th in yards per play (3.92) in the opening 15 minutes.

"It really comes down to getting the play run the right way," quarterback Jimmy Garoppolo said.

Seattle got lucky last week when Tyler Lockett avoided serious injury. Lockett was twisted awkwardly on a tackle against the Vikings and appeared certain to have injured his leg, but was checked out and returned to the game.

While he avoided serious injury against the Vikings, it was also Lockett’s quietest game of the season. The big plays from the first two weeks were gone and Lockett had just four catches for 31 yards.

This week, Lockett would like to replicate his performance in Week 17 of last season when he had 12 catches and two touchdowns against the 49ers. The 12 receptions were the third most in his career.

The Niners have scored 11 touchdowns this season and 11 players have done the honors. They are the first team since the merger to have 11 players score the first 11 TDs of the season, according to the Elias Sports Bureau.

One perhaps surprising player who hasn’t hit pay dirt yet is tight end George Kittle, who has 15 catches and no TDs.