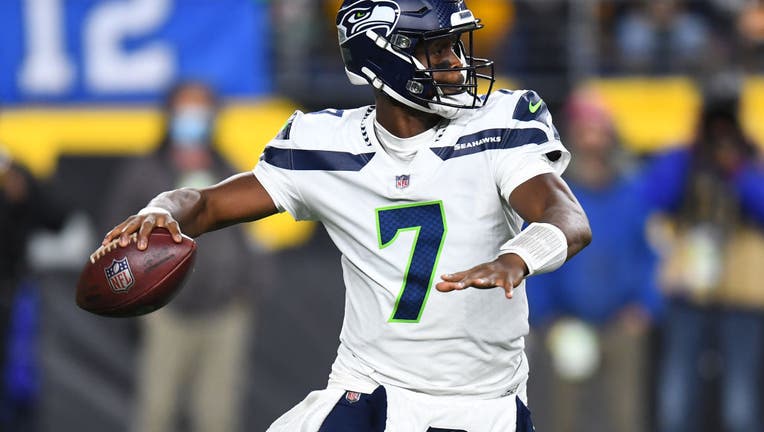 PITTSBURGH, PENNSYLVANIA - OCTOBER 17: Geno Smith #7 of the Seattle Seahawks looks to pass during the first quarter against the Pittsburgh Steelers at Heinz Field on October 17, 2021 in Pittsburgh, Pennsylvania. (Photo by Joe Sargent/Getty Images)

SEATTLE - Pete Carroll does not want the story written yet, because if it were, the story would say the Seattle Seahawks are faltering at a level rarely seen over the past decade.

The Seahawks coach would like a few more weeks before declarations are made about whether Seattle can find its way back into contention or is bound to languish at the bottom of the NFC West.

"It’s going to be a long way down the schedule, there are a lot of things that will happen around the league, and we have to take care of our business," Carroll said. "As it is always the case, postponing judgment is a powerful tool if you have it and that’s what we have to do."

While Carroll would like to postpone assessments on where the Seahawks stand, the reality is they’ve been a major disappointment heading into Monday night’s matchup against New Orleans.

At 2-4, the Seahawks are in last place in perhaps the toughest division in the league and with only Detroit and the New York Giants having worse records in the NFC.

Yes, the Seahawks have been dealt a challenging hand with the loss of quarterback Russell Wilson to a finger injury, starting running back Chris Carson with neck troubles and a defense that had a four-week span statistically that was among the worst in league history.

Seattle is more than one-third of the way through the season and at the point where if a turnaround is going to happen it needs to start with the Saints, but Carroll doesn’t want his team feeling a sense of urgency.

"I think it’s really important that we don’t let that disrupt the way we prepare and operate because it can turn the way you respond and react in a direction that can work against you," Carroll said. "When you over try, you’re not acting like you’re capable of acting. You’re acting like something else."

While New Orleans isn’t in the same precarious position as Seattle, the Saints can’t afford many stumbles if they want to keep up with Tampa Bay in the NFC South.

The Saints went into the bye week with more than a half-dozen starters or prominent regulars injured. This past week, several of them have been designated for return from injured reserve to the active roster. They include starting defensive end Marcus Davenport, who sacked Aaron Rodgers in Week 1 but hasn’t played since because of a pectoral strain. Also back — at least at practice — are starting linebacker Kwon Alexander, starting receiver Tre’Quan Smith and veteran kicker Wil Lutz.

RELATED: Seahawks believe rally at Steelers is sign of a turnaround

Alexander also has played in just the season opener, while Smith and Lutz have been injured since preseason.

Lutz was New Orleans’ kicker for every game the previous five seasons. New Orleans has been through several kickers since Lutz was injured, including Aldrick Rosas and Cody Parkey. The Saints also have kicker Brian Johnson on the roster if Lutz isn’t ready this week.

In addition, center Erik McCoy (calf) and starting left tackle Terron Armstead (elbow) returned to practice this week. However, receiver Michael Thomas did not practice on Thursday, nor did Taysom Hill.

"This bye is more unique than I can recall in the past just because of the amount of players that have been injured," Saints coach Sean Payton said. "This is a tough week because there’s so much going on and we have to see how it goes. ... There’s a handful of different guys (coming back). So, keeping track of it this week is challenging for me."

Seattle believed it found a working offensive rhythm in the second half last week against Pittsburgh by going heavy with the run game and taking some of the pressure off Geno Smith. Alex Collins was the primary ball carrier and became Seattle’s first 100-yard rusher since December 2019. But Collins also came out of the loss beat up, making the return of Rashaad Penny from injured reserve a big key this week for Seattle.

Whoever is the primary running back won’t have it easy against the Saints. New Orleans ranks second in the league, giving up just 79 yards per game rushing. Only Washington has topped 100 yards rushing as a team against the Saints in five games.

Smith’s return could provide a boost to a Saints passing game that has trailed well behind the standard set during the era of record-setting QB Drew Brees, when the Saints had a top-10 passing offense in all but two of the past 15 seasons and ranked first six times.

Through five games this season with Jameis Winston as starter, the Saints rank second-to-last in the NFL with 169.4 yards passing per game.

"The good news is I don’t have to bring the report card home to my mom right now," Payton said. "We’ve got a lot of football" still to play.

It hasn’t helped that Smith and Thomas have been out. The Saints have had to rely primarily on second-year NFL receiver Marquez Callaway and third-year pro Deonte Harris, who served primarily a return specialist his first two seasons.

That doesn’t mean the Saints don’t pose a threat in the passing game. With defenses forced to honor a running game led by Alvin Kamara and averaging 125.8 yards per contest, Winston has been able to connect over the top on some long TDs, including two of more than 50 yards to Harris.

After giving up more than 450 total yards in four straight games and tying an NFL record, the Seahawks were better last week holding the Steelers to 345 yards. Despite the improvement, Seattle still hasn’t held an opponent under 100 yards rushing and continues to get very little out of its pass rush. The Seahawks had zero sacks against Pittsburgh, but Carroll cautioned that the Steelers weren’t the best opponent to judge the state of the pass rush.

"I don’t think this was the game to make a statement about what we are or what we aren’t because of the style of the game and the way we played it up front," Carroll said.

The Saints have allowed nine sacks in five games.