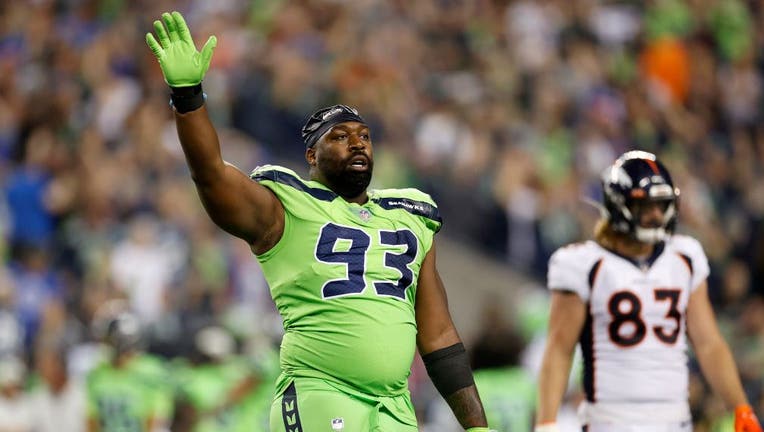 SEATTLE, WASHINGTON - SEPTEMBER 12: Shelby Harris #93 of the Seattle Seahawks reacts during the fourth quarter against the Denver Broncos at Lumen Field on September 12, 2022 in Seattle, Washington. (Photo by Steph Chambers/Getty Images)

RENTON, Wash. - The Seattle Seahawks will be without defensive end Shelby Harris for Sunday's game against the Atlanta Falcons.

In addition to a gluteus injury sustained last Sunday against the San Francisco 49ers, Harris has been away from the team all week dealing with a family matter.

"He's got an injury, but he also has a family thing he's got to attend to, so he won't make it back," head coach Pete Carroll said.

Harris had been listed with a back injury leading up to last week's game against the 49ers. He played just three snaps in the game before exiting with a gluteus injury. Whether the issue would have kept him from practicing this week is made moot by Harris' need to attend to a family matter.

Meanwhile, Myles Adams is set to be active this week to add some additional defensive line depth in Harris' absence.

"I'm really anxious to see him, because he was really active (in the preseason)," Carroll said. "He played the run well and was in the backfield, and he just was flashy. He brings us a little different style of play, his quickness will be a nice addition here, and I'm hoping it will show up and be a factor for us."

Free safety Quandre Diggs is officially listed as questionable to play after being limited in practice this week with a knee issue, but Carroll said Diggs is set to go against the Atlanta Falcons.

"He practiced today, he got through today," Carroll said. "He looked good. He looks good to play."

Cornerback Justin Coleman (calf) and safety Joey Blount (hamstring) are both doubtful as they recover from injuries sustained in practice last week. Coleman has a chance to return to action next week.

"He's really getting close, but he's still doubtful right now," Carroll said. "It would be hard for him to play this week."

Rookie Coby Bryant will get another shot at nickel cornerback in Coleman's absence this week.

Left guard Damien Lewis and center Austin Blythe both will play after missing separate practice during the week.

Lewis sustained a thigh bruise in Sunday's loss to the 49ers and was unable to practice on Wednesday.

"He was uncomfortable over the weekend, coming up coming out of the weekend, and we weren't sure (he'd get back)," Carroll said. "But he bounced right back yesterday, he got some work in today. He did all this stuff and I don't think it's bothering him at all. He's ready to go."

Carroll said Blythe's "shoulder just got sore" and he did not take part in Thursday's practice.

"He made it through today, and it looks like he's ready to go," Carroll said.

The Seahawks had three players in for workouts at the end of practice on Friday. Per Aaron Wilson of the Pro Football Network, the three players were center Marcus Henry, and linebackers Joe Schobert and Blake Lynch.

Henry, a Bellevue high school grad that played at Boise State, previously spent time with the Seahawks in 2018-19 and spent brief time on the team's practice squad. He's been a part of five different NFL teams with six games played with the Dallas Cowboys and Arizona Cardinals. He's played just four offensive snaps, which came last year with Arizona.

Lynch appeared in 20 games for the Minnesota Vikings over the last two seasons after signing as an undrafted free agent out of Baylor. He made six starts for the Vikings last year and recorded 35 tackles and two sacks.

Schobert is a six-year NFL veteran that has played for the Cleveland Browns, Jacksonville Jaguars and Pittsburgh Steelers.

Schobert has appeared in 93 career games with 80 starts. He made the Pro Bowl in 2017 as he tied for the league lead in tackles with 144 with Blake Martinez and Preston Brown. He played in 16 games with 15 starts for the Steelers last year with 112 tackles and an interception.