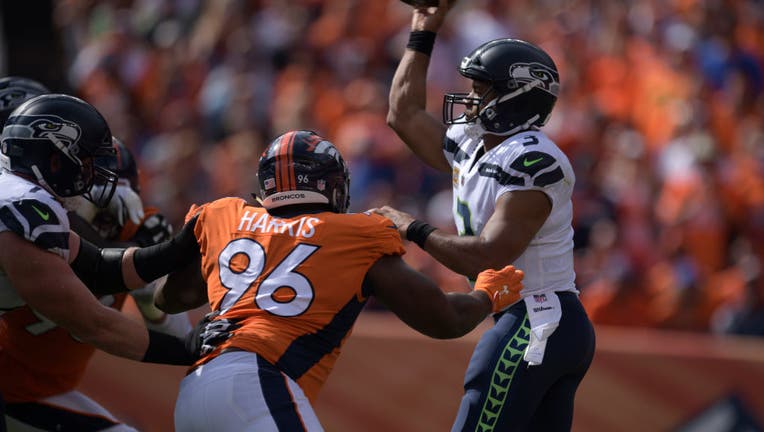 New Seahawks defensive lineman Shelby Harris may be new to Seattle, but he's an expert in the defense the team will run under new defensive coordinator Clint Hurtt.

While Harris hasn't played for Hurtt or new associate head coach for defense Sean Desai, he has spent the last three seasons playing under Vic Fangio with the Denver Broncos. Fangio, Hurtt and Desai all coached together previously with the Chicago Bears and they are implementing many of Fangio's defensive concepts with the Seahawks.

"This defense, you guys will love it," Harris said on Tuesday. "You guys will see that it is a mixture of rush and coverage working together. You are going to get a lot of zones out of it, but once everybody gets it, it’s going to be hard to stop."

The Fangio-style defense incorporates more 3-4 principles. Seattle has traditionally been a 4-3 defense under head coach Pete Carroll. However, both Carroll and Hurtt have expressed a desire this offseason to alter their approach.

"I've been itching for some time now to make some adjustments as we go, which is always what we're doing and then how many adjustments, how big and how significant are they are the ones that that can determine your effectiveness. And sometimes you have to make these kinds of decisions and let somebody go," Carroll said in March about the decision to fire previous coordinator Ken Norton Jr. and promote Hurtt into the role.

Harris clearly loves the scheme and the way it enables the players to perform.

"It’s a very D-line friendly defense and I think that – especially with the guys that we have – they are going to eat," Harris said. "I know Poona (Ford), Quinton (Jefferson), Al (Woods), all of them are going to love this defense, this defense is legit. I just can’t wait for you all to see."

If Harris had his way, fans would have seen him in Seattle prior to 2022. Harris had a visit with the Seahawks in Sept. 2016 that didn't amount to a deal. Harris landed in Denver the next season and has become a very solid player over the last five seasons. Harris said he had hoped to sign with Seattle then.

"They know it, I made sure," Harris said jokingly about reminding Carroll and G.M. John Schneider about the visit. "I’m talking trash to all of them like, ‘You had me up here, you had a chance to sign me. You let me go, and now you had to trade for me.’

"I think it’s my career coming full circle. I remember when I came up here for the workout in Seattle and I really wanted to be here. Once again, you only hear great things about Seattle, so you want to be a part of it and build on that culture. When you get traded back it’s like, ‘Oh okay, this was kind of meant to be.’ Especially after all of that and even last year when I was in free agency, Seattle was interested, but Denver beat them to the punch. There has always been a mutual interest in Seattle."

"This is my defense. When you really think about it, this is the defense that I ran for pretty much the last three or four years. I’m very comfortable in it and I know the ins-and-outs of it, but I’m just excited to get to work with coach Hurtt," Harris said.

"’I'm a big believer in this scheme, I believe that it creates a lot of turnovers, creates a lot of havoc, and is very easy to scheme and confuse quarterbacks. I just think that it fits me very well, obviously."