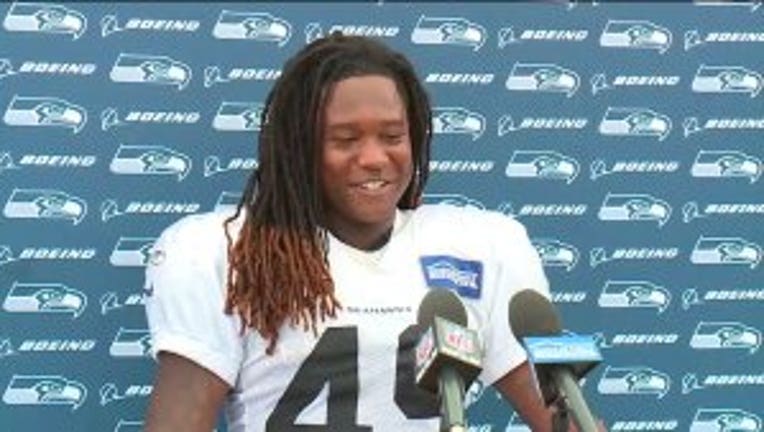 RENTON, Wash. - All Shaquem Griffin needed was a handful to snaps to prove he deserved another week on the Seattle Seahawks’ roster.

While Seattle’s defensive performance has been mostly an unexpected disappointment through three weeks, Griffin was a pleasant surprise last week against Dallas and managed to earn his way into more opportunity in just 17 snaps.

Officially, he’s still on Seattle’s practice squad. But barring an unexpected change, Griffin will be elevated to the active roster for the second straight week this Sunday when Seattle travels to Miami.

His latest chance for the Seahawks is part of a rocky past month for Griffin. He was cut by the Seahawks when they reduced their roster to 53 players for the start of the regular season. Griffin showed up for COVID-19 testing only to be called to meet with the front office and learn he didn’t have a roster spot.

After making Seattle’s roster each of his first two seasons, despite having lost his left hand as a child, Griffin said it was shocking to learn he didn’t have a spot.

“I ended up getting called in and I was thinking it was just a normal day and then to end up being waived, that was a big adjustment,” Griffin said.

For a day, it was unknown where Griffin’s future would be. He didn’t want to leave Seattle with his brother, Shaquill, the starting cornerback for the Seahawks. He knew he would have a spot on Seattle’s practice squad at worst.

But he also wanted to play and when a trio of teams reached out to Griffin’s agent expressing interest, Griffin had to decide his next move.

“I just didn’t see myself leaving. I didn’t see myself going somewhere else and starting over,” Griffin said. “Just because I leave doesn’t mean it’s going to be a better situation for me. Being here, worse come to worse, I’ve always got my brother.”

While Griffin spent the first two weeks on the practice squad, he finally got added to the active roster last week after injuries created an opportunity. He didn’t get his chance until the fourth quarter, but when he did, Griffin made an impact in his limited snaps. Griffin was able to help create pressure on Dallas QB Dak Prescott late in the game, but he also showed a new wrinkle in pass coverage.

As Dallas was driving late in the game for a potential tying score, Seattle dropped Griffin off the line of scrimmage and told him to spy on any throws underneath. Defensive coordinator Ken Norton Jr. said the goal was simply allowing Griffin to use his speed and make sure short underneath passes didn’t turn into big gains.

Griffin was credited with one quarterback hit and a key pass breakup on a throw intended for Ezekiel Elliott.

“A young guy got a chance to get back out there and he did great and was hauling butt all over the field,” Seattle coach Pete Carroll said. “We played him in a unique situation that he really handled well. He did a nice job rushing the passer in his other (opportunities) that he had. So I’m looking forward to him to continue to contribute. I was really fired up about his play.”

Carroll sounded pessimistic about the chance of safety Jamal Adams and linebacker Jordyn Brooks playing against the Dolphins. Adams has a groin strain suffered in the fourth quarter against Dallas, while Brooks suffered a sprained knee against the Cowboys.

Carroll said Adams was still “pretty sore,” on Wednesday but it would be a daily evaluation to determine his status for the weekend. Carroll was more blunt about Brooks, saying it’s “going to be a real challenge,” to make it back for Sunday.

The two unknowns still are cornerback Quinton Dunbar (knee) and safety Lano Hill (back). Both Dunbar and Hill were inactive last week against the Cowboys.