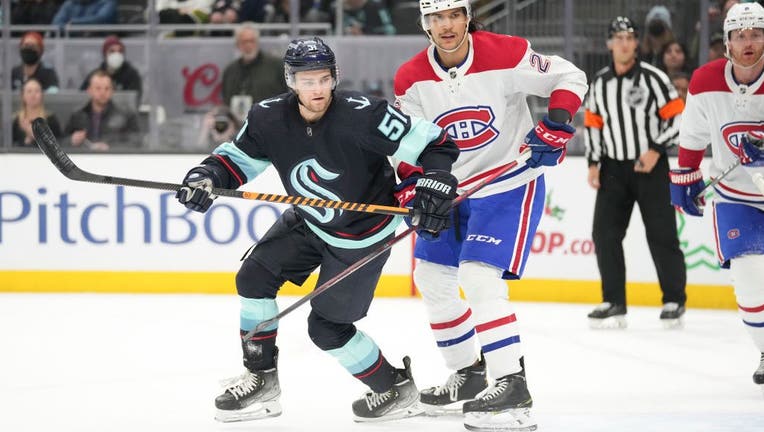 Shane Wright will play for Team Canada in the IIHF World Junior Championships later this month after he was loaned to the team by the Seattle Kraken on Thursday.

"Any time you can represent your country on the world junior stage, something you grow up watching, it's never really something you can pass up too easily," Wright said of the possibility of playing for Team Canada earlier this week. "No final decision has been made yet but it's definitely a tough thing to pass up if the opportunity comes, for sure."

Wright has played in eight games for the Kraken this season and scored his first career NHL goal in Tuesday night's 4-2 loss to the Montreal Canadiens.

"I think obviously It's going to be something I'll remember for the rest of my life," Wright said. "I think your first NHL goal is definitely a pretty, pretty cool accomplishment, pretty cool milestone.

"I think that just kind of helps boost that [confidence] even more. Anytime you can score. Maybe don't really notice it, maybe a little weight lifted off your shoulders, especially after not scoring for seven games there. So definitely going to hope to bring that confidence moving forward here."

Training camp for Team Canada is set to begin in Moncton, New Brunswick on Friday with the tournament running from Dec. 26-Jan. 5 in Moncton and Halifax, Nova Scotia.

Wright will get the chance to play alongside Connor Bedard (Regina Pats, WHL) and Adam Fantilli (University of Michigan), who are currently projected as the top two draft picks in next summer's NHL Draft. Additionally, five local WHL products are a part of the roster as well in defensemen Nolan Allen and Kevin Korchinski, winger Reid Schaefer, and goaltender Thomas Milic of the Seattle Thunderbirds, and defenseman Olen Zellweger of the Everett Silvertips.

The opportunity with Team Canada will build upon his recent five-game conditioning stint with the AHL Coachella Valley Firebirds and will give him consistent playing time over the next few weeks. Wright had four goals in five games played with the Firebirds during a one-time only, two-week stint in the AHL.

With Morgan Geekie back healthy and centering a productive fourth line for Seattle, the chance for regular playing time with Seattle is a bit lacking currently. The Kraken will get him back on the roster when the tournament is done. He can play in one more game for Seattle with the team still able to preserve the ability to slide his entry-level contract to next year. If he's not going to find regular action with the Kraken, they can return him to his junior team, the Kingston Frontenacs of the Ontario Hockey League for the rest of the season.

If he plays in a tenth game for the Kraken, this season will count as the first of his entry-level contract. But those are decisions that can be made after Wright completes his run with Team Canada.